It’s that time again! Since it’s October, this month’s raffle will be bigger than usual. In addition, it’s DEAD SKULL themed because… well, honestly, once you see the giveaway items it’s pretty clear that there was no name more appropriate for this particular contest.

THE WINNER WILL RECEIVE: 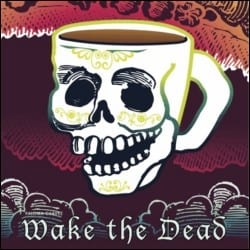 ONE 12 ounce Bag of Whole Bean “Wake the Dead” Coffee from Just Coffee Cooperative
Anyone who spends a lot of time in the comments here knows that I’m usually downing pots of coffee as I work on the site, and this is the stuff I’ll be drinking this month – so I decided to share and grabbed a bag for the winner, as well. Maybe someday we’ll be cool enough that Just Coffee will make us our very own WHO WAS COFFEE blend or something, but for now, this can work as official Creepypasta coffee fuel. 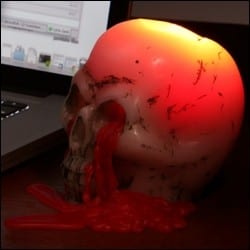 ONE Bleeding Skull Candle from ThinkGeek

At first, you’ll just have a normal skull candle. Place it on a heat-resistant plate, because in a while, you’ll need it! Light up the Bleeding Skull Candle and begin your night of mayhem and horror. As it burns, bright red wax will ooze from its eye sockets and down its face, pooling ever so deliciously on the plate. (See why you needed it?) The longer it bleeds, the creepier and bloodier it gets, making it perfect for those nights when you keep turning the dial up, up, up on the scare factor. 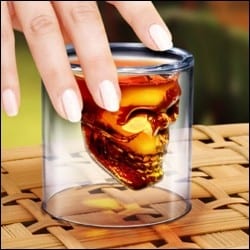 This is a double-walled shotglass, but instead of the inner wall being shaped like a shotglass, it’s shaped like a skull. When you pour in your favorite spirit, it inhabits the inner skull, coloring it in quite nicely. As a bonus, it also keeps the beverage in the shot glass cooler, if it takes you a while to build up the courage to drink it. Remember, we like you chuckleheads, so drink responsibly (and since we don’t condone underage drinking, just put some Dr. Pepper in it or something if you’re underage).

RULES AND HOW TO ENTER:

THIS CONTEST IS ONLY OPEN TO PEOPLE LIVING IN THE UNITED STATES & WHO ARE 18 YEARS OF AGE OR OLDER. This is non-negotiable – this prize package will be particularly heavy to ship (plus I’d like to avoid any legal issues with contests and other countries), and I also don’t want to hear any outrage from parents if their minor ends up heavily caffeinated and armed with a shot glass and a bleeding candle. So this month, the rules are a bit stricter, sorry.

However, to make up for that, I’ve made entering the contest far easier than it was last time. Everyone eligible can click the “Just click enter” option for one free entry into the raffle. That’s it, you’re entered, boom. If you want to earn MORE entries, however, you may additionally complete the other tasks for more entries. Following the official site’s twitter will earn you two more entries; writing a tumblr post about the contest WITH A LINK TO THIS BLOG POST will earn you another 5 entries (please link DIRECTLY to your tumblr post in the required field if you do this; otherwise it won’t count); using the automatic widget to send a tweet about the contest will also net you another 5 entries (if you decline to tweet via the widget, make sure to provide a direct link to the tweet you created – and make sure the tweet links back to this post). Yes, you can do all of these tasks if you want to for a total of 14 entries or you can do only one, or two, or three… the only REQUIRED entry is the “Just click enter” option!

If you’re ready to enter, just use the widget below!

*The ThinkGeek product links have our affiliate code present; as always, thank you if you purchase anything via our links!