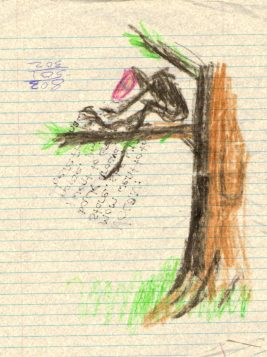 I wish he would have stayed home, away from this cruel world that we live in. Dear reader, children shouldn’t roam this world alone, but we can’t keep them in their nest forever. My son left his room one night to the enchanted chirping outside his window, and I knew what this was, but only from my years of studying this creature. You see there is a monster that wanders around the globe preying on innocent children, watching, waiting. I remember fondly, it was September 15th, 1983.

That was the year my wife and I escaped the busy world of New York to live our lives in the country, North Dakota. We lived happily there for several years, until I discovered my one true love, studying the Seed Eater.

The Seed Eater is a disturbed bird/human creature that roams the forests, stalking children, abducting them to be part of the legend. On June 19th, 1987 I first saw it sitting in my tree on my front lawn. I was in a daze when I saw it, my destiny beckoned to me, it said, “Follow it, love it, learn it.”

Around the same time two weeks later I awoke to a strange tapping noise on my front window, I knew it was him. I ran out of the house to see it sitting in the tree, just staring into my eyes, I was about to cry from the majesty of it. I remember it telling me that it wanted my help, I would do anything for it.

On April 3rd, 1988 the Seed Eater arrived at my window again. I was overjoyed. It said it was time, and I remember. You see, the Seed Eater devours children to keep itself alive, indulging in their youth to live forever. I remember the little boy, oh, what was his name? Oh well, it doesn’t matter.

I remember going to his house and just simply knocking on the door at 4:29 a.m., but nobody would answer. I saw the bay window, it was the boy’s room! I went to tell the Seed Eater, let’s just call him S/E for now. He told me how to get his attention the next day.

A couple of weeks went by, and the stench of the flesh was getting disgusting. Where was S/E? The parents of the boy put up lost posters last week, I wonder why they didn’t worry for the first two weeks? Oh well, I’m not concerned.

On May 14th, 1988 the boy was nothing but bloated rotting flesh, and the S/E was nowhere to be found, I guessed my services weren’t needed.

May 15th, 88 he came. He took the body and requested another.

May 18th, 88 How Ever Losing People Makes mE wonder

If you’re reading this, you may be the only hope of finding out the truth of this thing. In my room, there is a journal on page 49 you’ll discover how to take the life out of this monster, but he’s had me under a tight death grip, I couldn’t do it, but maybe you’ll have more strength than me.

Goodbye Everybody, I hope being eaten is what I brought on to myself

More classic Creepypasta stories can be found here:
Sally (Play With Me)
The Rake
The Statue