It was approximately 12:15 when I entered the Johnson County Community Health Clinic. I was there for an appointment I had set up weeks ago, just a routine checkup. It wasn’t a new place for me; I had been there a couple of times before. However, the place had an odd nostalgic feel to it, as if it were a location from my childhood or something, and I could never pinpoint exactly what this feeling was, or where it came from.

As I walked in, an overwhelming feeling of deja vu swept over me. The hum of the flickering fluorescent lights, the white tile flooring, the muted beige paint that colored the walls. I noticed that there was a TV mounted in the corner, a smaller flatscreen, that was playing a short PowerPoint slideshow on a loop of ads and events that were being held by the clinic. I passed the empty waiting area— a small area of the main room with magazines, children’s playthings and blue cushioned chairs— and approached the woman at the front desk. She was sitting in her blueish gray office chair, looking at a spreadsheet on the same Windows XP desktop they’ve had since 2008. There was a sign-in sheet on the counter in front of me.

“I have an appointment with Dr. Pebins?” I asked.

She began typing something into her keyboard.

“Yes, I’ll tell the doctor. Please fill this out.”

She handed me a clipboard which held a simple fill-out form. I walked back to the waiting area, took a seat, and began to fill out the form.

I was about halfway done with filling in my information when I slumped back in my chair. I hadn’t gotten much sleep the night prior, and I was exhausted. As I slumped back, I noticed something very peculiar— my head never hit the wall. In fact, it felt like it went in. I got up, quite frightened, and looked at the wall.

Not a single hole, or dent, had been made in the wall by my head.

So, I reached to touch the wall.

And my fingers went through it. 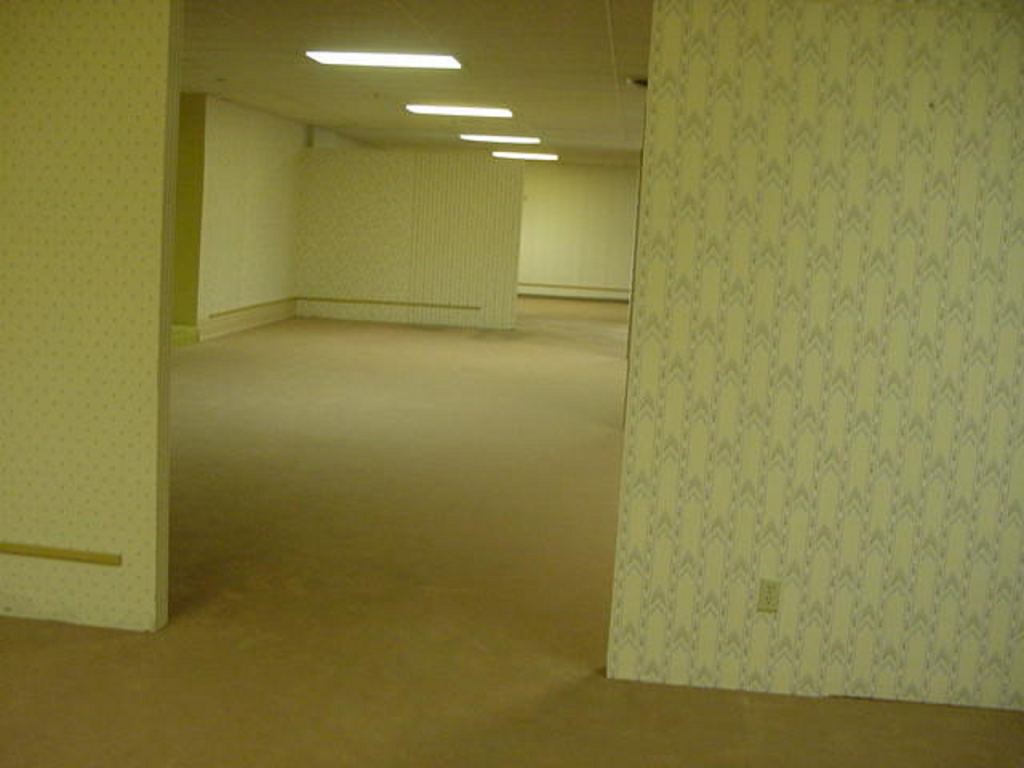 I recoiled in shock. “What the hell was that?” I thought, as I reached to touch the wall again, only to find my fingers clipped through once more.

Then, suddenly, I lost my balance, tripped, and fell directly through the wall. I fell face-first onto some dirty tan carpeting. Upon getting back up, I realized that I was in a completely different room. Well, not really a room, per se— more so a set of rooms, all of which connected by openings. The walls were covered in gross tan patterned wallpaper. There was also an overwhelming stench of moist carpet.

I turned back around and tried to put my hand back through the wall, and it wouldn’t go through. “Okay, what the fuck?” I muttered. I looked back into the room. There were no windows, no doors, nothing on the walls— other than that disgusting wallpaper, of course— it was completely empty, aside from a singular plastic blue school chair. At this point, the only thing going through my mind was fear, and the repeating thought of “I need to leave” on loop in my head. I started running through the rooms, desperately trying to find an exit, but to no avail. There was no exit.

Was this my permanent location until I died? No, there had to be a way out! I wasn’t just going to be left here, right? Eventually, someone would notice that I was gone!

Then, in the distance, I heard footsteps, but not those of a human’s— at least not a normal human. Alongside the footsteps was a gurgling snarl, like that of an angry animal.

I began to run. I ran as fast as I could from whatever the hell was approaching me. I didn’t want anything to do with it.

I ran for what seemed like forever, but I was always back in the same room I started in. At least, it looked like the same room. Not that I could tell them apart.

So, I sat down, defeated. A feeling of dread filled my body, as I started to cry. I was going to die here.

I’m still there. I haven’t left. I’ve accepted my fate.

In fact, I can actually hear footsteps. I wonder who that is?

Publisher’s Note: This pasta was inspired by a post from the /x/ board on 4chan. For more information, click here.