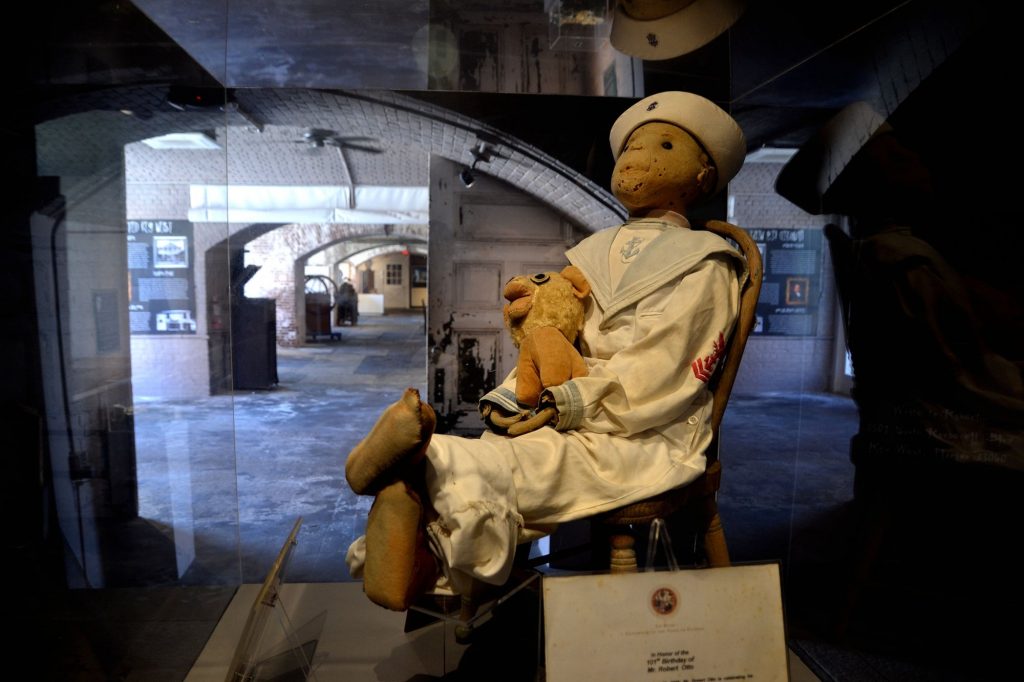 In the late 1800s, Thomas Otto and his family moved into a mansion at the corner of Eaton and Simonton streets in Key West, Florida now known as the Artist House. The Ottos were known to be stern with their servants, sometimes even mistreating them. It was the treatment of one such Haitian servant that provides a twist in this story.

This woman was hired to take care of their son, Robert. One day, Mrs. Otto supposedly witnessed her practicing black magic in their backyard and fired her.

Before she left, the woman gave Robert a lifelike doll which stood 3 feet tall, had buttons for eyes, human hair (believed to be Robert’s), and was filled with straw.

Dolls that resembled children were not unheard of during this time, but this one proved to be special. Robert named the doll after himself and often dressed it in his clothes. Robert, the doll, became his trustworthy companion. He took it with him on shopping trips into town. The doll had a seat at the dinner table where Robert would sneak it bites of food when his parents weren’t looking. Robert would even be tucked into bed with the boy at night. Soon this innocent relationship took on a strange nature.

Soon after, Robert chose to be referred to by his middle name, Gene, after being scolded by his mother. He told her that Robert was the doll’s name, not his. Gene was often heard in his toy room having conversations with Robert. Gene would say something in his childish manner and responses could be heard in a much lower voice. Sometimes Gene would become very agitated, worrying the servants and his mother. She would, on occasion, burst in to find her son cowering in a corner while Robert sat perched in a chair or on the bed glaring at him. This was only the beginning.

Household objects would be found thrown across the room, Gene’s toys turned up mutilated, and giggling could be heard. Whenever these unusual acts took place, Gene always said, “Robert did it!” The boy took the punishment but always insisted that the blame was Robert’s. As the mischief grew, more and more servants took their leave as new ones were hired. The Ottos’ relatives felt it was time to do something. With the recommendation of a great aunt, Gene’s parents removed Robert from his care and placed him in a box in the attic. This is where he resided for many years.

After the death of his father, Gene was willed his boyhood home. He decided to live in the Victorian mansion with his new wife. Gene had become an artist, and felt the house was spacious and would provide a place for him to paint. He went to the attic and dusted off his childhood toy. He became attached to the doll despite his wife’s displeasure. Gene would take the doll along with them everywhere they went. He even sat in his favorite little chair while Gene and his wife slept nearby. The Turret Room became Robert’s domain after Mrs. Otto moved him back to the attic. Their marriage slowly became sour until Mrs. Otto supposedly went insane and died of unknown reasons. Gene followed soon behind.

Robert supposedly attacked people, sometimes locking them in the attic. People who passed by claimed to hear evil laughter coming from the Turret Room. For some time, Robert remained in the empty house by himself until a new family purchased the mansion and restored it. The doll was once again moved to the attic. This pleased it as much as the last time. The doll was often found throughout the house. On one certain night, Robert was found at the foot of the owners’ bed giggling with a kitchen knife in hand. This was enough to send them fleeing from the home.

Robert was later moved to the East Martello Museum in Key West, where he sits perched in a glass box. Despite his new living quarters, the doll is believed to not have given up his menacing ways. Visitors and employees claim they have seen the doll move. His smile has been known to turn into a scowl. One employee cleaned Robert, turned off all the lights and left for the night.

The next day, he returned to find lights turned on, Robert sitting in a different position than the night before and a fresh layer of dust on his shoes. Some say he’ll even curse you. If you want to take a picture of him, you must ask politely. He’ll tilt his head in permission. However, if he doesn’t and you take the picture anyways, a curse will befall upon you and anyone who accompanied you to the museum. The same will happen if you make fun of him.

To this day, Robert remains at the East Martello Museum in his sailor suit clutching his stuffed lion, continuing his menacing ways.