If you’re just staring to read my experiences with this horror, you should read my other stories first. You can find them here:

Okay guys, a lot has happened since the last time I checked in. Lot of you messaged me asking if I was doing ok. Some of you even went as far as sending me you phone numbers and really reaching out. I thank you for that.

We have not encountered Rose since the last time. Also, we decided to move. I got a decent job on the south of the US and we thought it’d be a good idea to get out of here (any Atl folks, holla at me). My father did go see the priest who baptized me and the story actually become more convoluted, if you can call it that.

Anyways, I got baptized in a church called Ostrog, in Montenegro. Here is the pic of it. I don’t believe in god in any kind of way, but this church is amazing. It was built a long time ago. When the Turkish Empire came to take over, people took it stone by stone and moved it up in the mountain where the Turks couldn’t reach it. It is a magnificent building. Many people of different religions, including Muslims and Buddhists, come to that church in search of a spiritual help. That is the only place I ever felt something “more” than just my non-believer reality. 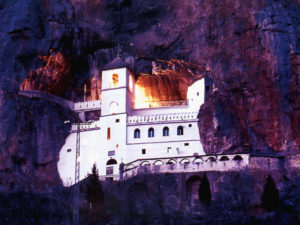 So, when I was six, my dad decided to baptize me there. Neither of my parents are particularly religious, but my dad fallows traditions, and baptizing kids is one of them. He decided that baptism should be performed at the most famous church in Balkans, Ostrog. You had to schedule it, and demand was so high that I was going to do it with other kids as a part of a group baptism. When we arrived there, and disappointment awaited (at least for my dad, I couldn’t give any less fucks). At the entrance of the church, the priest stopped me.

“You. You cant go in.” He physically stopped me with his hand. Priests in our country wear long black robes and rock long beards. So I was standing there being held by this batman looking dude. My dad jumped in front of me and asked what the problem was.

“And why is that?” My dad asked, shocked.

“I cant really tell you, but it is better for us all if he went elsewhere.”

“Son, please, leave. But remember this, don’t dare not baptizing him. You have to.”

So my dad took my hand and walked away not knowing what in the fuck was going on. On our way home, he was trying to figure out what happened. He thought that maybe I messed something up, like peed behind the church or something (which sounded like my kind of thing, but I didn’t do it).

When we got home, we got a phone call. It was from that priest. He wanted us to come back. Right away. It was a 35 minute ride back. My dad and I were more confused than ever. We arrived at the church, and all the previous baptisms have been performed already. It was only 3 of us there.

“I decided to baptize your son despite…”

“Despite what?” my dad asked curiously.

“I could not tell you. But it is important we do this fast.”

So we did. I walked in a circle and he went on with his prayers spraying holy water on me. I remember getting bored as hell right before he finally finished. He told us to go away and not to come back unless something out of the ordinary happened to me.

My dad was just glad we got it done. That was 20 years ago. My dad went back there few days ago. Priest was still alive, although retired. He still lived on the church grounds. It took some talking into (and donations) for him to speak up.

I got baptized on February 13th 1992. On the night before my baptism, priest was handling his sheep (back in the day, priests raised sheep and cows and lived mostly off of that) when he saw a figure in the dark. It was strange for someone to stand there that late at night, especially because visits were over and all the clerical staff was already in their designated housing.

“Hey, who is that?” Priest yelled.

Priest explained that from time to time, he’d get visits from desperate people, begging for blessing or shelter. So he went ahead to see what the woman wanted. He said that when he came there, he saw a woman in white, standing, not moving. She was standing among sheep, but they formed a circle around her, almost like a safe distance. Priest claims that he immediately felt something unholy.

“ What do you want?” he asked in a defensive aggressive voice. At that point he knew it wasn’t a peaceful visitor he was talking to.

“Tomorrow. Tomorrow you will encounter a boy. Just like any other. His name will be Milos. You won’t baptize him.”

Priest told my father that he performed several exorcisms before but he was never actually scared. This time, he felt unsafe.

“You and your kind have no place on this holy ground.”

“My kind, father? What would that be?”

“You, demons.” His voice was cracking in fear.

She laughed. “Demons? I realize you’re a man of cloth, but believing in demons? That takes a lot of faith, father.”

“Listen to me you pity priest. I know who you are. I know what you think. I know you feel my strength. Deny my request, and you’ll never sleep in peace again.”

Then, she left. Rest of the story you know. He refused to baptize me than he changed his mind. Apparently, he told my dad that he’d rather be tormented by an unholy spirit than deny god’s child a chance to connect to Jesus. He also said that he has been paying for it since the day he baptized me.

Every single night for two weeks after he baptized me, he has been seeing a woman in white appear on his window. She’d just stand there, looking at him with hand tilted. No smile though, but only a face of anger. He’d say many prayers but it didn’t seem to affect her. Then, his sheep started dying. There were no wolf marks, no sign of force. Just laying dead. Finally, number of exorcisms skyrocketed. He claims that this was a direct consequence of him disobeying woman’s orders. He even showed an exorcism videotape (they started filming in the chapel in the mid 90s) to my dad. My dad says it was unreal. Apparently a 13-year-old girl came in the chapel with her mom. Her mom was sobbing in tears begging for help. Priest started performing his ritual when the little girl started throwing stuff around. Priest called two young guys who came in to pray that day and asked them to hold her. She kept walking in circles, with two grown men holding her. And right before she fell to her knees, she said “You shouldn’t have done it father.” She was cured.

My dad had more than enough of information thrown at him, but he wanted to know what this woman was. Priest said that he originally thought it was a demon, but a lack of prayer efficiency and her freedom of behavior on the holy ground was concerning. He then thought it was some sort of a cult, witchcraft maybe. The problem is, she has been visiting him on February 13th every year. All the livestock he’d have would die on that day. Any sick person coming for help to the church that day would get worse. Number of possessed people would skyrocket abnormally on the 13th. And at the end of the day, she’d come to the window, no matter where he was. He tried talking to her many times, asking what/who she was. She never responded. She never aged. Priest was finally broken down to the point where he quit. He remained living at the grounds, but he couldn’t do his job anymore. He lost faith. He claimed that the god should’ve protected him. My dad says he may be mentally unstable at this point. He was mentioning something about Morana, whatever that meant. It appears to be a goddess of death in some cultures, but I really think this man has gone mad.

I think that this whole story was jabber of an old man gone senile. Goddesses? Demons? Hardly.

That would be the disappointing story of my baptism. I have not had any encounters with any of them since the last time. I am moving away, hoping it helps. I also decided this: if I encounter them again, I am taking the orange. I cant go on like this forever. I just… can’t.

For the ending of this story, go HERE – it will not be posted on Creepypasta. I feel that the final part is most effective when left at its original source.

NOTE: This is the sixth in a series of several popular Reddit posts documenting some seriously creepy experiences. We are publishing them here with express permission of Milos Bogetic aka inaaace, the original poster. The story is in multiple parts, and will be published completely over the next few days – much like what I did with the ‘Bedtime’ series earlier this year. After the stories have all gone up, I’ll edit each post with links to the other parts.

The OP has finished the continuation book that he promised during his successful kickstarter project.

You can find the paperback and Kindle e-book versions here: The Story of Her Holding an Orange by Milos Bogetic  – full disclosure: our referral link is included.

I know that this will not be new material for all of you, but for those of you who – like myself – don’t use Reddit, I wanted to post it so that you guys could enjoy it as much as I did after having it brought to my attention. Thanks again to Milos for letting me post it, and enjoy!

259 thoughts on “The Story of Her Holding an Orange: Part Six & Link to the End”