If you haven’t read my previous posts, please read stories one, two and three.

Hey guys, after many PMs asking for an update, I decided to bring you up to speed on whats going on. But first, here is the screenshot of the desktop picture that Rose/her cult put on my laptop. I haven’t been able to find the original photo or any kind of a hidden file. Woman on the left is my mother holding me, and woman on the right is her friend holding my childhood friend. We do not know who the child on the left or woman way in the back are. None of them remember this picture ever being taken. 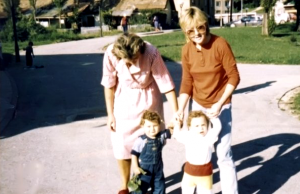 So after I told my mom what was going on, she talked to y grandma. Grandma didn’t tell her much but my mom had a feeling that she got upset after hearing what was happening. I decided to call my grandma and after much begging, I got this story out of her.

My grandma was born in Croatia but grew up in Bosnia. She was the kind of a child who’d spend every waking our outside playing, exploring, etc. Her favorite play spot was down by the river not too far from where she lived. She’d often go there with her friends, but on this particular day, none of her friends came along. She went there anyways. She was doing her traditional build-a-fortress-in-the-sand thing, when she heard someone calling. She looked to the road nearby (the only place where anyone could come from, there was only one path to the beach) but nobody was there. She shrugged it off and kept playing. She heard the call again. “Dana.” She looked around. Nothing. “DANA!” She jumped, terrified, and ran to the road to see what in the fuck was going on, but nobody was there. She thought one of her friends was fucking with her and decided to turn around and go back to the fortress. Then she saw him. It was a man, of above average height, maybe 6’4”, dressed in the suit and one of those hats that gentlemen wore in thirties. He had a dark, dark black suit on with white dress shirt underneath and a black tie. Holding a cane. Thing is, he was standing in the water knee deep. In a suit that probably cost arm and a leg at that time. She was taken aback, but as any curious kid, she decided to check what was going on. She walked up to the border where waves were ending. He was still standing in the water. “Yes, mister?” she asked politely.

“I got something for you.”

Well, as predictable as the story may be getting, it is unfortunately fucking true. It was an orange. My grandma grew up in wealthy-ish family and even in the tough economic times, she had an abundance of fruit, so the orange wasn’t causing a “wow” factor in her.

“Uh… Thanks mister, but I just had lunch. You can give it to someone else.”

“No, no Dana, this one is specially for you.” He tilted his head to the side and for a second she thought his hat would fall into the river. It didn’t. He still held an orange in his other hand, offering it.

“You take it, and you take it now.” My grandma’s been through a lot of shit. World war II and Bosnian war. She’s seen shit man. But she said she’s never seen something as scary as that man’s face that day. She was a child and therefore very impressionable with vivid imagination, but she swears that when he said that, his eyes (the white part not the pupils) got much darker and she could see the anger on his face, although he had somewhat of a grin on.

She started running away. She stopped and turned around to look if he was chasing her. He was just standing there, looking after her. She said she could see the darkness going away from his eyes. He put the orange back into his pocket, turned to the side, and started walking away. Through the fucking river. Like step by step, with his cane, just walking like he was on the street.

My grandma was scared for a while, but after few years, he was just a memory that was rarely recalled.

My grandma gave birth to my mom in ’52. It was a happy day because my mom was her first child. Birth went fairly easily, but she was kept in the hospital for few days. Last night before she was released, the man in the black suit came back. Almost 20 years later. She was sleeping (she had a room to herself). She woke up because light came on in her room. In scary movies, you hear the noise but there is nobody there, then suddenly they jump you from behind. Yea, that didn’t happen. She opened her eyes, and he was just standing there in the middle of the room. The same man, same suit, same hat. Not a day older than how he looked 20 years ago.

Orange in his hand.

“What…what do you want from me?”

“You only now have to take this, and it will all be over.” He was showing an orange, smiling. It wasn’t a crazy grin, just an almost friendly smile.

“I don’t want anything from you. Leave or I’ll scream.”

Well, that’s when he pulled the Rose shit. He tilted his head to the side, put the scariest grin on his face revealing the whitest teeth you’ll ever see. He started speaking in the voice of a 10-12 year old child.

“He will take it.” As he said that with his child voice, he lost the grin, put his head back in normal position, turned around and walked away. Before he got out of the room, he turned the light off. She never told anyone about this man until I pulled it out of her.

It’s been little more than 30 years since then until she saw him one last time. It was war in Bosnia. Country demolished by politician assholes who just wanted money. You know how wars work. Anyways, times were tough. Food supply was extremely limited. My grandma and grandpa would go days without eating. They’d hunt pigeons on the balcony and shit. That bad. But then, an orange started appearing on their doorstep every day. One orange, in the center of the welcome rug. She remembers how bright it was compared to the grayness surrounding them. She’d throw every single one of those fuckers out. My grandpa was confused as to why she’d throw away perfectly good food in times like these, but she wouldn’t tell him. Until they showed up. Yes, they. The man in black and…well, Rose. It was ’93. They were bombing the shit out of their town that day and nobody would even so much as stick their head through the window, let alone walk out. But my grandparents heard knocking. They thought someone had finally come to take care of them. Knowing that intruder would enter anyways if they really wanted to, they opened. On their left, the same man was standing. Same black suit, same hat, same cane. Same age. More than 50 years later. Next to him was a woman in red shoes, white dress, long black hair, extremely pale skin color, and a lipstick so bright it would make you nostalgic for the grayness of wartime. She had her head tilted too, smiling ear to ear.

“Hello Dana.” She spoke in a voice my grandma says could only belong to a very, very young girl.

“What the fuck is this?” My grandpa asked. Immediately, both of these people’s (I still call them people) faces lost grins and looked at my grandpa.

“You may want to be silent.” Rose spoke in her original, adult voice (or what my grandma assumes would be her natural voice.)

My grandpa had been shot at, tortured, starved, but he never felt the fear like that. He lost his voice and shut the hell up.

Their grins returned, head tilted, teeth popped out shiny as ever.

“Where is he?” Rose asked her in her childish version of a voice.

“Who? What do you want from us? We have nothing!”

“Don’t do this. Just tell us where.” Seemed like Rose was losing patience.

“Your grandson.” Her eyes pierced my grandma’s soul. She felt blood freeze in her veins.

“He…he is not here. He is in Montenegro.” She though that whoever these people are, they’d give up once they found that her grandson (presumably me) has moved away hundreds of miles away.

They produced even wider smiles, if that was actually possible. They turned around almost synchronized, and walked away. My grandparent watched them leave over the balcony. Bullets were flying around, bombs falling everywhere, and they were just walking down the street with no fucks given. Heads still tilted. They could see them smiling.

So, I’ll be the first to call it. Bullshit. Bullshit bullshit bullshit. This is becoming a fairy tale. This ain’t happening man. Yea. I’m with you. Had I read it here or anywhere else, I’d enjoy the story then tell OP to go fuck himself for trying to convince me this shit is real.

But, this shit is real.

I have no logical explanation for it. Are they a cult? Maybe. Why don’t they age? Why are they everywhere? Why are they following everyone I know? Fuck me if I know.

NOTE: This is the fourth in a series of several popular Reddit posts documenting some seriously creepy experiences. We are publishing them here with express permission of Milos Bogetic aka inaaace, the original poster. The story is in multiple parts, and will be published completely over the next few days – much like what I did with the ‘Bedtime’ series earlier this year. After the stories have all gone up, I’ll edit each post with links to the other parts.

The OP has finished the book that he promised during his successful kickstarter project.

You can find the paperback and Kindle e-book versions here: The Story of Her Holding an Orange by Milos Bogetic  – full disclosure: our referral link is included.

I know that this will not be new material for all of you, but for those of you who – like myself – don’t use Reddit, I wanted to post it so that you guys could enjoy it as much as I did after having it brought to my attention. Thanks again to Milos for letting me post it, and enjoy!