The Ridges – previously known as the Athens Lunatic Asylum – is famous among Ohio University students. The other week, I ran into a friend who recently graduated from OU, and when the conversation turned to spooky things (summer is a classic time to tell ghost stories, after all) he told me about a particularly creepy part of The Ridges’ lore. 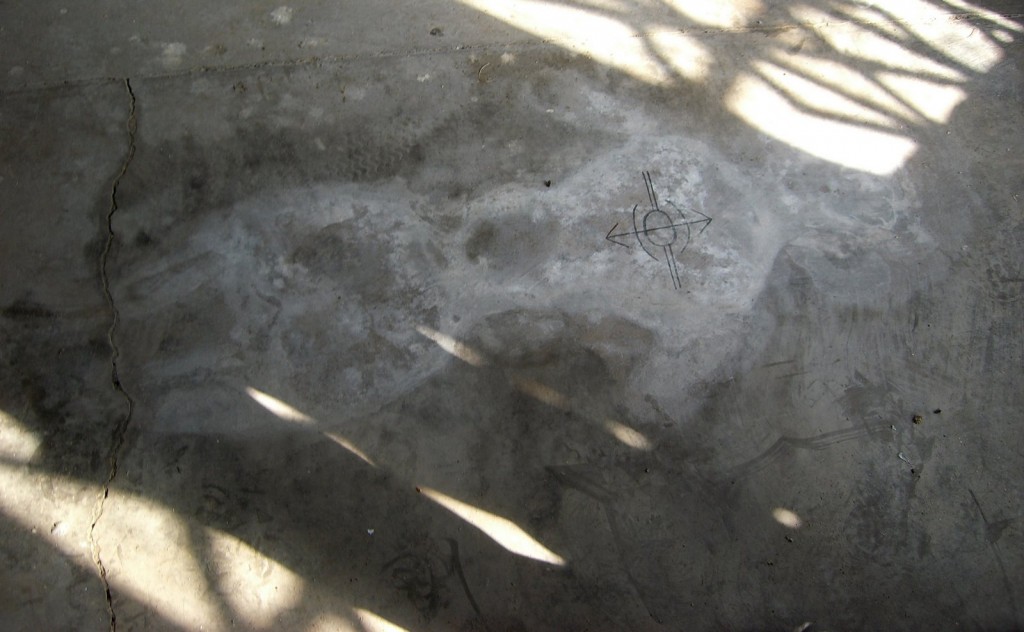 This seemingly-human outline is permanently emblazoned on the top floor of wars N20. That’s right, it’s not spray-painted on – it’s been there for decades.

The story goes that in 1978, back when the facility was still active as a mental asylum, a patient named Margaret Schilling abruptly disappeared. The hospital employees searched for weeks, but it wasn’t until over a month later – on January 12, 1979 – that she was discovered. Strangely, she was found in one of the closed-off, abandoned wards – N20 had previously been used to house extremely infectious patients and was no longer in use.

There are claims that she was either already completely decomposed or simply that she had clearly been dead for weeks, but the main point remains the same: she had apparently, soon after her disappearance, somehow ended up in Ward N20, where she completely disrobed before lying down on the floor and dying. The official cause was determined to be heart failure, and some people assume that as Ward N20 was unheated, she could have frozen to death in Ohio’s bitter winter. Why she chose to lie down in such an orderly fashion before her death – and why she initially went to the abandoned ward, or why she stayed there until her death – these are all, of course, questions with answers unknown.

As for the stain, it’s explained best by Jessica Castle:

“…it is more of a photograph negative than a stain. As you can see in my photos, there are windows in front of the stain. As her body decomposed, the fluids were constantly passed over and over again by the sunlight from the windows, developing a photograph of sorts.”

The story has been featured on TV programs – notably FOX’s Scariest Places on Earth, but unfortunately I can’t find the episode online anywhere – and these programs have added what is most likely nothing more than and embellishment: supposedly, a girl went on one of the ghost tours of The Ridges, where she touched Margaret’s stain. The rumour goes that she was then “claimed” by Margaret’s spirit and was eventually driven to suicide over the possession. This part of the story is at best unsubstantiated and at worst simply fluff created by FOX, but it’s still creepy enough to include here!

For more general information about The Ridges (they are absolutely packed with creepy history and rumours, so in the interest of simply whetting your appetite, I’m only including Margaret’s story here today):
Athens Lunatic Asylum on Wikipedia
The Ridges Mental Health Institution and The Ridges Cemetary @ Haunted Athens Ohio
The Ridges @ Forgotten Ohio
Official information and map from Ohio University
Souls of the Asylum – a collection of “channeled stories” from Athens Lunatic Asylum patients buried at The Ridges cemetery in Athens, OH by Doug & Berta Lockhart (full disclosure: our Amazon affiliate link is included here).

*As a sidenote, this post marks the divergence of the Real-World Creepy tag from the Based on a True Story tag. The explicit differences (plus examples) are better detailed on the submission page, but the summary is that from now on, Real-World Creepy will be the tag housing my write-ups of “true” paranormal places and stories. Based on a True Story has been changed to be more true to its name – pastas more loosely based on experiences, locations, etc, will now be placed in this category.