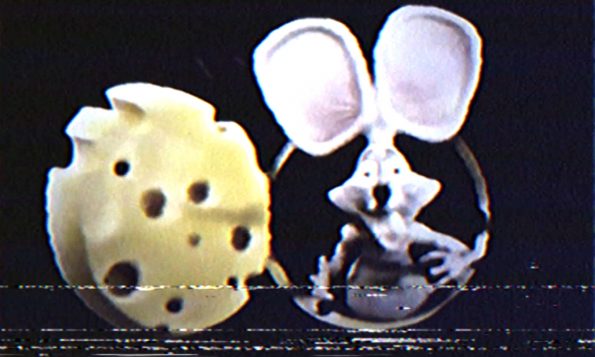 Ever heard of “Nightmare?” Like a lot of other games in the 90’s, it came with a VHS which you timed with your play. The character on the video would give you instructions on what to do while you played the game in real-time. Being a scaredy-cat, I refused to play it when my mom bought it for us. My brother was disappointed about not being able to play Nightmare, but my mom had a solution. She brought out “Rap Rat”. It was a cheap, dingy little thing catered to kids my age; you went around the board, collected cheese, and the first player to reach the end would win. It seemed simple enough, and since it reminded us of “Mouse Trap” (which we didn’t have), there were no objections. We popped the movie into the VHS and set up the board. The first part of the video was just a simple explanation of the rules as well as instructions on how the game worked.

Then, Rap Rat came onto the TV. He was… not what any of us had been expecting. My smaller brother, who was only three at the time, immediately left the room crying. The rat did not even resemble a rat. The ears were far too big. It had a mouth lined with two teeth, and the inside of the mouth looked almost swollen. The most striking part about the thing, though, was the eyes. They were large, glassy, and fish-like. I asked, then bothered, then begged my mom to turn it off. Rap Rat suddenly shouted loudly, screaming and wailing, saying “WAIT YOUR TURN” in a demonic, low-pitched voice that was not at all like his normal obnoxious, nasal voice. In the background, we could hear the narrator saying “He’s Rap Rat, and he’s the boss” over and over again in an overly serious tone.

The video was… indescribable. Images crossed the screen in quick succession, overcut with Rap Rat’s expressionless eyes. The images were some of the things I was afraid of at the time. A person looking over a balcony, a hornet slowly stinging someone’s eye, an extreme close-up of a tarantula, a pit full of writhing cobras, and a bloodied syringe filled with green fluid. We immediately turned the video off, and I ran out of the room screaming, slamming my door. It took my mom twenty minutes to convince me that the video was gone, that I would never, ever see it again. I had nightmares all week about Rap Rat.

That wasn’t the last time I saw Rap Rat. While my girlfriend and I were preparing to move in together, I was cleaning out the closet of my room and found Rap Rat again, with the same VHS and the same board game inside. It was almost perfectly intact, save for a thick layer of cobwebs and dust bunnies on top of it. This was strange…didn’t my mother get rid of it? And what was the game doing in my room? I let out a bit of a gasp when I found it, and my girlfriend came into the room, asking what was the matter: Breathing harshly, I said, “Rap Rat.” She laughed a bit, asking if it was a joke. I shook my head, explaining that it wasn’t. She didn’t believe me—nobody did—and I decided that the only way to prove it to her was to show her the video.

I borrowed my neighbor’s VHS and played the video for her. However, the images had changed. I saw a clown, it’s nose bursting and spraying blood onto the screen. I saw a woman alone in a dark room. I saw a man being forced to pick up white-hot metal and hold it in his outstretched hand, turning his hand to a leathery mess. The scratching I heard as a child continued, picking up louder and louder. Then, Rap Rat showed up and began twisting and convulsing, it’s arms thrusting this way and that. The costume wasn’t a costume anymore—the felt was real fur.

Its face wasn’t plastic, but instead a bristle of thorns with teeth. The eyes turned inwards and suddenly popped out again: Rap Rat’s huge fish eyes were inside out, staring right at me, watching my every move, my every expression. It grinned widely and gestured at my girlfriend and I with a single, outstretched, inhuman hand. I could hear the faintest scratching at my front door. The TV went blank and showed static. The scratching got louder. It wasn’t scratching anymore, but thumping: the thumping of tiny feet on wood. My girlfriend embraced me in fear, and my senses kicked in. Before anything else could happen, I stopped the video, ejected it and unplugged the VHS. The scratching stopped. When I looked out the living room window, nothing was there.

The police showed up soon after, warning us that a neighbor had seen a figure outside of our door and had called in concern. My girlfriend and I simply couldn’t explain what had happened, and had to tell the police officer that it was us. I was furious that a children’s game was terrifying me. I went to pick up the tape, but the VHS burned my hand. It felt like I had touched a Bunsen burner on the highest setting. We had to get the oven mitts from the kitchen in order to take it out, and even then it was scorching hot. I brought it outside, tossed it down on the sidewalk, and crushed it with my winter boots.

My girlfriend and I had nightmares every night. We would both wake up in the middle of the night, and describe eerily similar images that we saw in our sleep. The scratching would always be there at night, when lights were off and the room was pitch-black (save for the moonlight coming in through the window). Now, though, the scratching would happen every time I went near the front door, and every time we said Rap Rat’s name. It sounded as if something very small was dragging something across the ground outside of the door… pacing… waiting. I would simply wait, with the covers pulled up to my neck, until I succumbed to exhaustion.

At this point, I was determined to sue the company for damages. The first thing I did was call my mother and ask where she got “Rap Rat”. She had no idea. I found a merchant who sold versions of “Rap Rat” and asked how I could get in touch with the company. He sent me this e-mail.

“I don’t know about the game, but I know it was created by the same people who created Nightmare. The company is called “A Couple of Cowboys”. Try them.”

I did a bit more research, and discovered that the company became defunct in 1994… only two years after the company created Rap Rat. I discovered why they did soon after.

How Rap Rat Came to Be

In 1992, the year of the game’s development, A Couple of Cowboys had commissioned a manufacturing company in Haiti to create the doll portrayed in the game. The company who created the puppet ran a sweatshop, where they forced women and children to produce the various components of the puppet, including the felt and plastic of the doll.

One day, a young Haitian girl got her arm caught in the industrial sewing machine. The spring-loader, unable to handle the weight on the machine, came loose and struck the child’s neck, killing her instantly. A few days after the funeral, the mother of the child came to the factory, demanding to see the owner, who denied that he had anything to do with it. In a fit of rage, the mother said that the “blood from the innocent” would seep into every crevice of the doll, every component with which it was created and all who touched it would die. She claimed to have summoned a “fear demon” and screamed, at the top of her lungs, “APARAT WILL CURSE YOU!”

The owner simply laughed and told his corporate bosses about Aparat. They spread the joke from person to person, and the game was renamed “Rap Rat”, a loose anagram of Aparat. Each recitation of the name Aparat brought with it a greater and greater curse. Only two years after “Rap Rat” was created, the company was shut down and the owners hired by Mattel.

There were stories of the workers begging for days off, skipping work for weeks and weeks, finding the puppet in strange places. Sooner were the stories of suicides. Grim, violent suicides in which the workers would stab their hands and burn themselves to death, writing “I AM FEAR” on the nearest surface in blood.

Nobody knows where the Rap Rat doll went after the original creators disappeared. Some say that the last things the victims saw before going insane were large, sunken, fish-like eyes.

1. NEVER, EVER say “Aparat” out loud. Saying a demon’s name out-loud is an invitation to them, a calling. If you have already done this, it cannot be undone.

2. Do not try to speak to or contact Aparat.

The VHS is back. I thought I stomped on it, smashed it to kingdom come, but it’s back. I found it in my sock drawer yesterday.

This time, I was ready. A whole bunch of people have been contacting me, trying to get the tape or some sort of video from the board game. My answer to you is that it’s just too dangerous. If I did that, it could very well drive you insane. Scare you to death. The video, and the game, and Rap Rat itself has some sort of strange power. Rap Rat follows me everywhere I go. I see little shadows in the corner, or hear sounds coming down the hallway when I’m the only one home. If Rap Rat is there, it will let you know, but it will never let you see it…until it’s too late, of course.

A lot of people have been watching the “normal” video from the “normal” board game. That’s the thing…Rap Rat can be normal. It will trick you into thinking it’s just a puppet, and then stalk you day and night.