Thanks for all of your entries! Here are our top three:

1. Willow Creek (Congrats to moonlit_cove on your flask!)
2. The Shame
3. Razor Games

Some entries were deemed very close-but-no-cigar and as such will be posted to Crappypasta for further refinement. It’s our hope that they will be reworked enough to eventually end up on the main site! Please keep an eye on the Crappypasta Round-Up category if you are interested in giving feedback to the stories in question, or simply check in with Crappypasta regularly.

As mentioned in the April Discussion post, this month we are having a writing contest!

I’m going to just go ahead and copy/paste what I wrote before:

If you’ve been active in the creepypasta community for a decent amount of time, it’s highly likely that you’ve encountered gaming pasta. Such stories are often referred to as “Haunted Cartridge” pastas due to how many of them involve protagonists who, for some reason, are willing to pay for obviously counterfeit versions of old NES games and then have to deal with the consequences of whatever weird angry gaming spirits they’ve invited into their console of choice.

The genre gets a (largely deserved, let’s be honest) bad rap mostly due to how many gaming pastas are nothing more than retellings of the original, more novel haunted game stories. For example: while Pokemon Black was novel at first and did creep some people out, the countless “Pokemon Blood Orange” or “Pokemon Burnt Sienna” spin-offs that sprung from its loins got really tiresome, really fast. Likewise with the “Ben Drowned” rip-offs – people started churning out variants that essentially were just mad libs, replacing just the game and Ben’s name. There’s really no faster way to kill a creepypasta subgenre than overloading readers with a glut of indiscernable copycat stories – even when a decent and/or original entry appears, readers seem to be too jaded from the ” crappypasta overload to give anything in the genre a chance.

With all that said, I do believe there is hope for gaming pasta. Even if it doesn’t receive many additions, I do retain the Haunted Games tag for a reason – there are those of you out there who truly do enjoy your creepy video game stories, and when they’re done well, I fully agree that they can be enjoyable.

So this month, I have a challenge for all you writers out there: write and submit a good gaming pasta.

From April 19th until May 5th, I will open up a special submission form where people can submit gaming pastas only; anything unrelated that gets sent in via this form will be deleted. The moderation team and I will read through all of the submissions and pick three winners that we feel best accomplished the goal of writing a good gaming pasta. The top three submissions will have their story hosted here, of course, and the top-ranked eligible author will also receive a Legend of Drink Gaming Cartridge Flask: 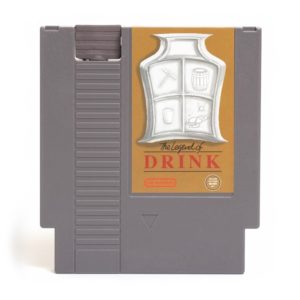 Submissions for this contest are now closed! Thank you to everyone who participated.

I look forward to seeing what you guys can produce!

*There is an affiliate code present in the link to the flask on Amazon. This means that if you buy anything on Amazon after using that link, the site will get a small kickback – which goes back into the pot to fund more giveaways like this one. If you use our affiliate link, thank you!