It was the first day back to school and I was absolutely tense about it. Wracked with anxiety, and plagued by nightmares, I’d barely gotten any sleep for the past week.

The night before the big day, I lay in bed, staring up at the ceiling, watching as the light played terrible tricks, painting patterns in the shadows resembling fog or smoke, just above the fan where it hung. The floor slowly sank around me, pulling my bed into a bog of muck that began to swallow me. Instead of water it was a pool of dread made tangible, a roiling pit of lava, and as it bathed me I began to breathe it in and drown as I burned.

I woke with a start and restarted my prayers where sleep had cut them off before:

When morning came, there was a knot of loathing in my stomach. I didn’t know if I could endure two more years of bullying–being shoved down in halls, checked down to the floor by a shoulder or tripped by a foot in the path. “Oops,” the owner would say disingenuously moving onward and directing a grin at me. Turning over in bed, the knot of loathing tightened. It was nearly 8:30. I was running late. I would have missed the bus by now. I’d have to ride my bike.

I entered my first period chemistry class very late. Mrs. Smithfield didn’t look up as I slunk into my desk. I was 35 minutes late and for some reason she was still in the middle of marking attendance. That was odd.

“Mrs. Smithfield, I’m here,” I demanded. “I’m sitting right here!” She didn’t look up. Nobody did.

As class went on, everyone continued to ignore me. My usual bullies sat near the back, not paying me any mind. Nothing was thrown at me, I wasn’t called to answer a question. This was great. Had my prayers been answered? Two more years and nobody would notice me. The only drawback was Mrs. Smithfield couldn’t see me either. At one point, I got out of my seat and waved my hands in front of her face. She didn’t even bat an eye. Was I invisible? Or worse: was I dead? Was I a ghost? Being invisible was what I had always wanted but not quite like this. I didn’t actually want that. I just wanted to be ignored. Now it was actually happening. How was I going to get credit for attending my classes? Could I graduate if I couldn’t be seen?

The class was nearing its end when things began to grow strange. The floor began rippling and a strange dark snow began to fall from above. The walls of the room appeared to be growing darker as well, and a horrible smell hung in the air. Some of my classmates faded from view, returning in flickers, like lightbulbs struggling to shine before dying out once more. and I couldn’t be sure, but Mrs. Smithfield seemed to be moving to and fro at the front of the classroom, yet her feet never seemed to touch the ground. I tried to tap the kid in front of me. He was new, I think his name was Shane Longo? My hand seemed to go right through him. That didn’t seem right. It must have been the lack of sleep. My mind was playing tricks on me. Nightfall came over the classroom and I closed my eyes. When I woke, a thick black fog shrouded the room, clouding my vision. The classroom was empty. I tried to gingerly step around them, but I lost my footing on one of the bodies that were dead on the undulating floor, but I caught myself on the steel door frame at the last moment. My palms came away black and the metal was searing hot.

A man burst through the doorway just as I was reaching into my locker to stash my books.

“Hey kid! What are you doing in here?”

He wore a mask and some kind of heavy raincoat. I looked into his eyes confused, “Are you talking to me?” I asked.

“Yes!” He shouted, glaring at me like I was stupid.

He grabbed me by the backpack strap, “yes I can see you, you fuckin’ idiot.”

“What the–are you trying to die kid?” he asked as he pulled me outside. There were waves of intense heat and dozens of people looking at us exit the building. Shock was painted across each of their faces.

As I gulped in deep breaths of fresh air, the world stopped spinning.

“Yea seems delirious,” the fireman, explained “probably breathed in some of the gas before the explosion.”

“That doesn’t make sense,” the woman demanded, “if he was in there during the explosion he wouldn’t be alive.”

“Does it really matter why he’s alive? He’s alive. Thinks he’s invisible. Maybe something knocked him in the head.”

The woman turned to me then and asked: “Can you hear me?”

She smiled kindly, “My name is Bethany, can you tell me your name?”

She took me by the hand and began leading me to the ambulance, “It’s Scott. Am I in trouble?”

She snickered despite the situation, “No. Why would you be in trouble?”

“Because I was late.”

Her eyes were kind, “That might be the only reason you’re alive, so you’re definitely not in trouble. I just want to check to make sure you’re okay and then we’re going to go to the hospital.” she fit a mask over my face. It was full of air that felt sterile and weird. She began moving a bright light between my eyes and checked my pulse.

“No. Are you sure?” I ran my hands through my hair. The singed remains of it crumbled away.

She gestured to something over her shoulder and I began to come around. I began to understand. My breathing quickened and my eyes grew wide with shock.

“Relax,” Bethany smiled, “you are going to be fine.”

The entire wing of the school that I’d just been dragged out was a wreckage behind her. Pieces of the roof were caving in and the window of the classroom that I had just left exploded outward with a change in pressure as the fire devoured the air in the room. Fire hoses were spraying in futility trying to extinguish the raging flames that were engulfing the building.

Check out two stories from author Scott Savino (plus many more) in Monstronomicon, a collection of 100 short horror stories from 70 authors, now available on Amazon.com.

Please support the author’s latest project on Kickstarter as well. Black Rainbow is an anthology collection of LGBTQIA horror stories, with tales written by LGBTQIA authors and allies, and featuring LGBTQIA themes. To pledge your support to the project, visit it on Kickstarter now. 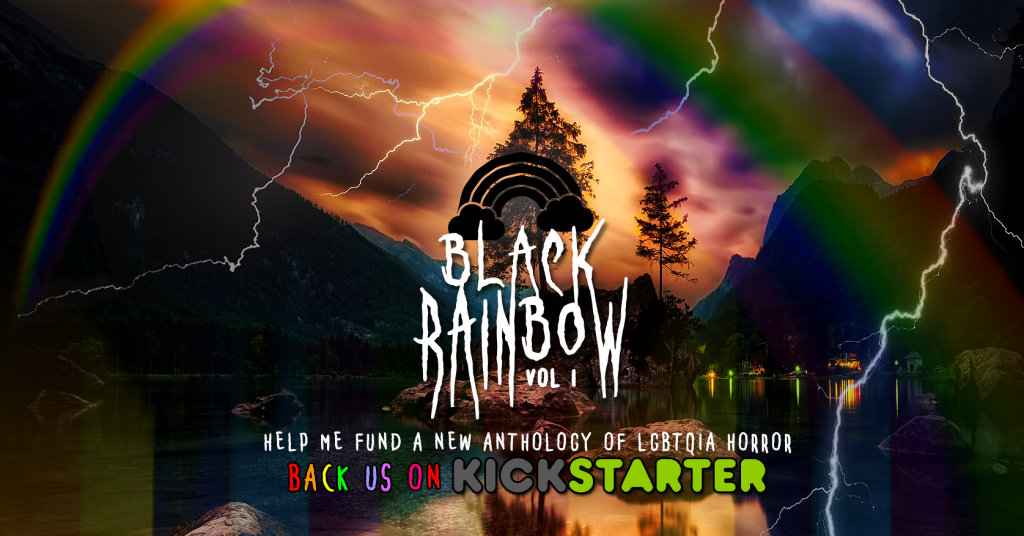