Have you ever heard of an old PC game called “The Theater?” Yeah, I didn’t think so. Probably because many people say it doesn’t even exist. You see, The Theater is an old computer game released around the same time as Doom. Today, if you ever find it, it’s only available on crappy bootleg CD-ROMs, which, more often than naught don’t even actually contain the game. The actual legitimate copies that they say were released back in the day feature a blank cover with nothing but the sprite of what has since been named the ‘the Ticket-Taker’. He is simply a poorly drawn, pixelated Caucasian, bald man with large red lips wearing a red vest over a white shirt and black pants. He is completely emotionless, though some say that if you smash the disc his face is shown as angry the next time you look at the cover. But this is just dismissed as an urban myth. What is peculiar about The Theater, though, is that there is no developer named on the jewel case, nor a game description on the back. It is simply the Ticket-Taker on a white backdrop on both sides.

The game was initially known for its inability to install correctly. The installation process immediately locks up the computer when the user reaches the licensing agreement. Also strange about the licensing agreement for The Theater is that whenever the development studio is supposed to be named, the text is simply a blank line. Anyways, most people who have claimed to own one of the original CDs say that they figured out how to install the game by simply rebooting their computer on the licensing agreement with the disc still inside. Then they are prompted to press ‘I AGREE’ on startup. Then they continue with the installation. The game then starts up without any introduction besides a main menu that is simply the sprite of a movie theater’s exterior on an empty city street. The title fades in and then the 3 menu buttons ‘NEW GAME, LOAD, OPTIONS’. Selecting OPTIONS immediately crashes the game to the desktop. LOAD is said not to function at all. Even if you do have a saved game, nothing happens when you press it. Thus, NEW GAME is the only working menu option. 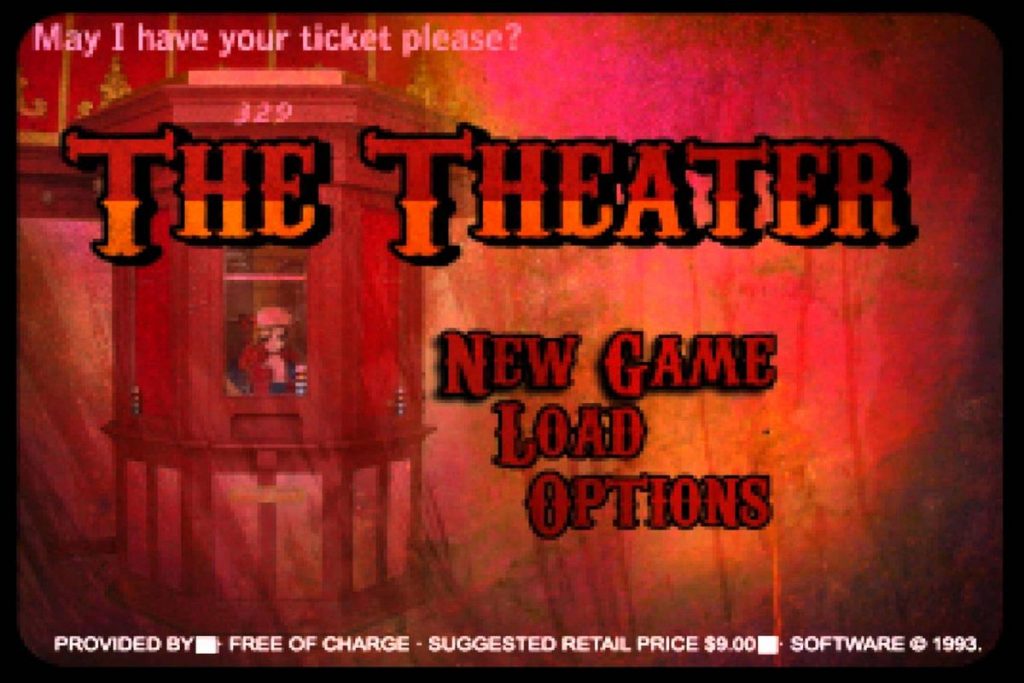 Once it is selected you are in the first person view. You are standing in an empty movie theater lobby, with the exception of the Ticket-Taker standing in front of a dark hallway which one can only assume leads to the theaters themselves. There’s nothing to do but look at the poorly-drawn, mostly illegible movie posters or approach the Ticket-Taker. Once the player moves towards the Ticket-Taker a very low-quality sound clip plays saying “THANK YOU PLEASE ENJOY THE MOVIE” along with a speech box saying the same thing. You then walk into the hallway and the screen fades to black and you’re back in the empty lobby and you do the exact thing again and again and again.

While this may sound like a really horrible game, a number of peculiar things occur as you continue to play it. The number of times that you have to continue into the hall after giving your ticket to the Ticket-Taker before the strange events happen is unknown. Most state that it’s completely random and could take anywhere from the first playthrough to the four hundredth. What happens, though, has deeply disturbed some players.

The first occurrence is when the player fades back in after walking into the hallway. This time they will notice the Ticket-Taker is completely absent. The player then, without any other options, decides to walk into the dark hallway. The sound clip and text box mentioned previously still play in the absence of the Ticket-Taker, but when the player walks into the hallways the screen does not fade out. It goes pitch black as they walk deeper into the hall, but the player’s footstep sound clip is still playing as they continue to push the up button on their keyboard. Those claiming to have played the original game report to have felt extremely uncomfortable walking down the hallway, anticipating the whole way something horrible happening. Well, eventually the player is unable to move forward. There is nothing for a few moments before a strange sprite that is described as ‘the Ticket-Taker but with a swirl for a face’ appears and stands before the player. The original players of the game say their bodies immediately froze up and their stomachs churned they saw this sprite (which has been appropriately named the ‘Swirly Head Man’). Nothing happens as the Swirly Head Man stands before them. Then suddenly a piercing screech plays as the game glitches out. This lasts for a few minutes, with the screeching being continuous. Then the player is abruptly returned to the lobby with all the sounds and graphics being as they should be.

The game continues normally for the next couple of ‘cycles’ of entering the hallway, with a couple of the original players claiming the Swirly Head Man would briefly appear and disappear in the corner of the screen as a brisk ‘yelp’ sound effect plays. Then, at some point after meeting the Swirly Head Man, the player sees the Ticket-Taker pacing back and forth (though there is no walking animation – the sprite’s limbs are completely static, so he just hops up and down slightly as a substitute) with his eyes being wide and his mouth open to simulate a worried facial expression. Some players noted that the movie posters had been replaced with images of the Swirly Head Man, which caused them to immediately turn their character’s head away from the posters and approach the Ticket-Taker. Then another different, low-quality sound clip plays, but the speech box contains nothing but corrupted characters that cause whatever text that would have been in the box to be completely illegible. Due to the extremely low quality of the sound, it is debated by players what exactly the Ticket-Taker says at this point, though it is widely agreed that he says ‘NEVER REACH THE OTHER LEVELS.’ Then the screen fades out once again and returns the player back to their starting point in the lobby, but the Ticket-Taker is gone and the hallway is blocked by a large brick wall sprite. Touching the brick wall will immediately crash the game. And that’s all there is to it. No one knows what the ‘Other Levels’ are or how to gain access to them, nor is it known why the Swirly Head Man causes such acute fear in those who have seen him in the game. All the original copies of The Theater have either been lost or destroyed. But the creepiest part is the fact that is that all the original players of the game claim to occasionally see a brief glimpse of the Swirly Head Man out of the corner of their eyes.

A sequel to this story has been written. To read it, click here. The author of this tale is unknown. The story as featured here was transcribed from a 4Chan /x/ screenshot. For more like this, please see the “Video Game Hoaxes and Urban Legends” thread on the Something Awful forums.