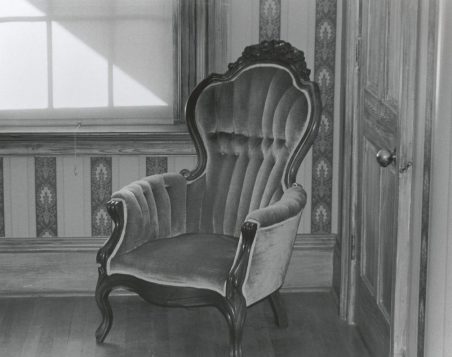 I was never at all superstitious. from what I can remember I always looked at life from a practical sense. I was always in the present, I liked my practicality and realism, it was my favorite part of myself.

One day I went to my local IKEA, to get some inspiration for a home project. I often went to IKEA to browse, I enjoyed getting lost in the endless hallways and rooms, each with a different setup to stimulate my imagination. I often imagined what a furniture piece would look like in my home, although I didn’t have much money, and it would be cheaper just to make one. I came across something very odd during my last visit to IKEA. It was nothing much to look at, it was a vintage high back chair with a wooden frame and dull white cushions on the seat and the back. This was odd because IKEA didn’t sell chairs like this, as for me I had a more modern taste, I never made or bought anything like this. I was curious and decided to get a closer look, It had a label, but it was not specific in the least, it red “The Chair”. No logo, no brand, no price, nothing but “The Chair”.

It did not look like it was very comfortable, but I was intrigued and decided to sit anyway. it was the most comfortable chair I had ever sat on in my life. I felt myself slowly mold into the chair, despite this being unusual, since it was only a small wooden chair with sown on cushions. I could feel my body growing more and more tired, I didn’t want to fall asleep in the middle of a store, so I tried to get up, My body wouldn’t let me. My eyelids were beginning to close, I forced them open, but it was useless. I called for some assistance, but no one answered. In fact no one seemed to notice me at all. I made another attempt to will my tired body out of the chair, my arms began to shake as I pushed on the arm rests on the chair, I managed the strength to lift my body a few inches off the chair, but my fatigue got the best of me, and I slammed down on the chair, panting.

I tried everything possible to keep myself awake, but my eyes began to close without me even noticing, I caught myself just in time, my eyes closed for only a millisecond, but when I opened my eye again I saw that the only people left were security guards and janitors, they still payed no attention to me. I turned to gaze out the window, I saw the moon and the empty parking lot, it was night time, the store was closed.

I tried again to get myself out of the chair, I could not move. I screamed at the top of my lungs, which at this point was just a quiet cry. The janitor that was moping the floor right next to me should have been able to hear me, but he remained unaware of my existence. the louder I screamed, the more tired I became. And I could feel my eyes closing again, there was nothing I could do.

This time it felt like more time passed than a millisecond, maybe a minute or two, but when I awoke there was no one. I looked around, all the furniture items had vanished apart from the chair I was sitting on, it was just a big empty warehouse. I looked out the window, the moon, the sky and the parking lot had gone, my view was pitch black, it looked as if the windows were blacked out. At this point I couldn’t scream, I could barely move my mouth. I noticed a tingling in my lower back, I couldn’t do anything but sit there in utter discomfort. I didn’t want to close my eyes again.

The discomfort only got worse, the tingling was felt under my arms, and all through my back, my shirt felt as if it were attaching itself to my skin. My eyes would not close now, the discomfort drew on, and on, and on. Until finally I drifted to sleep once again.

I awoke to find that all the lights had gone out, I felt like I was being watched, I could no longer turn my head. A shiver ran down my spine, and throughout my entire body. My mind ran rampant, I could not rationalize this, utter terror was the only thing running through my head. I heard small scampering movements, I saw in the darkness what looked like a man, standing there and staring at me, What was going on?

The last time I fell asleep, I was not even aware I had drifted out of consciousness, but when I woke up I found IKEA’s structure crumbling, the walls and floor had faded to a dirt yellow, there were various cracks and holes in the building, and out the window was the sun, blaring at what seemed like triple what it normally emitted, there were no items on display, but there were a few shopping carts, that were knocked over and gathering dust.

I sat there in the chair for what seemed like weeks, there was no pain, but I knew I was being tortured, there is all kinds of torment after all. I could not move, I could not turn my head, I was completely paralyzed, The only thing I could feel were the shivers, and increasing pressure. I wanted to fall asleep, but I could not, I wanted to get out of the chair, but I could not.

I sat there, my mind was racing but my body lay completely motionless, the utter lack of motion was torture enough, and by the second it just got more uncomfortable and more stiff. Eventually, after what felt like months, I managed to make a slight head turn, it turned into shaking. I could feel my body getting heavier, and I felt the wooden legs of the chair shaking, they began to crack, and after about 3 hours of uncontrollable shaking, the the chair broke.

My eyes closed for an instant, and when I opened I found that I was back in the store at the very instance I has sat on the chair. Everyone was staring at me. The chair lay there, its 4 legs snapped off and the back was cracked. I could move again. And I could see an irritated young employee approaching me.

“Excuse me sir, Your going to have to pay for that.” He told me

I went to the counter and payed with my credit card, I asked him if he could throw the chair out for me, I told him that since it was broken I had no use for it, He agreed.

I raced out of that store, and I did not look back.

I abandoned my car, I walked, I did not want to sit down at all. I tried my best to make sense of that I had just been through, It was too vivid for a dream, yet once I broke the chair it was like nothing had happened. I found myself shaking still, and decided to stop for some chamomile tea for my nerves. I wanted to call my friends and tell them everything I had been through, but I knew they wouldn’t believe me. I knew of sleep paralysis, I researched the symptoms, they matched what I felt during my time in the chair. But there was nothing on the internet to explain the eyes, nor the changes in landscape between sleeps.

I had my car towed, I lived relatively far away, it was a long walk home. I was beginning to tire out. By the time I reached my neighborhood it was dark out. I wanted to believe that it wasn’t true. I wanted to rationalize, but that was no longer possible. I came across my friend Simon’s house, and decided to go in for a visit.

Simon let me stay at his place for the night, I just told him that my car slid into a ditch, and had to be towed, and that I was too tired to walk any further, Simon advised me to sit down, but I had refused. Simon said he had to run to the store, to buy some wood for a project. I did not want to be left alone, but I told myself it would be fine. I did not sit down at all. I pulled out my computer and decided to check my blog, I did not know what I was expecting, but I always liked to check.

I saw a post I had never made before, it was a photo of the chair, you know which one I mean. There was a caption: This antique French armchair is so cozy you won’t ever want to get up! You will be so comfortable, you’ll lose track of time!.

I froze up. Closed the lid of my laptop, and decided to go to bed, I was I went upstairs to the guest room. I was still quite paranoid, and afraid to rest, but I was growing more tired by the second, and maybe some rest would do me some good. The guest room didn’t have a bed, all it had was a vintage high back chair with a wooden frame and dull white cushions on the seat and the back. I was too tired to resist.

That is where I am now, It has been 3 days, though time is hard to tell. Simon probably thought I had left and returned to my house, as he came into my new room many times now and hasn’t noticed me once. I know I will fall asleep soon, I can feel myself growing more and more tired every time I press a key, but I had to get my message across. You never know what can happen in life, you never know what to trust, if you take a seat, you may never get back up.