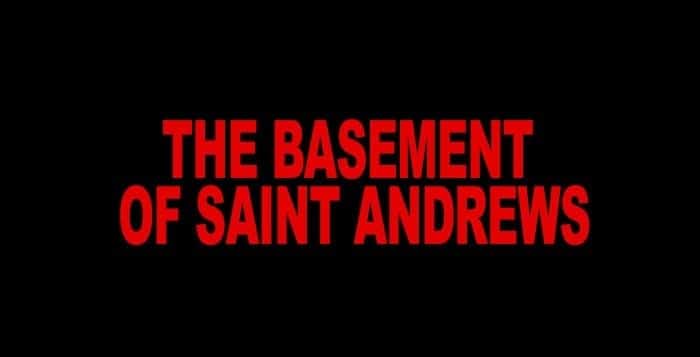 21 Dec The Basement of Saint Andrews

Posted at 10:56h in Locations and Sites by Creepypasta 0 Comments
Please wait...

"The Basement of Saint Andrews"

“Why don’t you go ahead and tell me what happened..”

God I hate that woman’s voice. I never really got along with my therapists, they always seemed so… apathetic. Its like they don’t care about the patient, rather just eating up time with their bullshit “grounding techniques” in order to get a fatter paycheck. I might as well be better off just explaining what happened to any old stranger on the street. So long as someone hears my story, what does it matter if you’re a professional reading this.

Anyways, let’s start at the beginning. I don’t have many friends. I was always the introvert, everyone pretty much avoided me. No one really wanted to be friends with the jewish girl, so I just kinda rolled with it. I spent a lot of my time reading, writing and such. But the thing I love doing the most is exploring. My family is a bit tight on money, so we couldn’t really afford luxuries like high end phones, or television, or even internet for that matter. So growing up, I filled my time up with whatever I could explore or find. My Rabbi always used to chew me out for roaming around the synagogue at shabbat. good memories….but when I got older, I started exploring bigger places, abandoned buildings, old parks, backwoods. But there was one place I have been wanting to explore for years. About a decade back, there was this old hospital down the road, Saint Andrews. It’s massive, just loaded with hallways and corridors. It was truly an urban spelunkers dream, but there was also apparently some dark side to it. There was many a time where I’ve heard that the hospital is haunted, or that there were unspeakable medical experiments that took place there. I never really believed in the stories though, and I always wanted to check it out, but I just never took the initiative. The thought just sat there for weeks and weeks, digging at the back of my mind. Eventually it faded, swallowed up and overwhelmed by my school work. But the year came and went, fading by like an old pencil drawing. Pretty soon summer bitchslapped me hard upside the head, leaving a massive welt of boredom on the side of my face. So I decided to kick up my gear and start exploring, just like I used to do when I wasn’t being fucked over by tangents and parabolas. It was the same thing every single time, old chairs, overwhelming graffitti, piles of useless accounting papers, empty beer cans and used condoms, all the things you expect in a secluded spot taken over by time. Pretty soon I found that I had pretty much embarked through every possible location I had easy access to. At the moment where I thought that there was nowhere left to occupy my time, Saint Andrews came to mind. I don’t know why, I just remembered. It was sort of eerie, but I was foolish enough to push it out of my mind. I packed up my shit and started off, walking into town towards that damned hospital..

It didn’t quite take me too long to arrive I suppose, considering it was only a miles walk from that little cottage I called home. But when I arrived something definitely felt off, like, that feeling you get when it’s your first time on a rollercoaster, like something bad is sure to happen. Despite my nervousness, I walked in the rusted front gates and up the path to the main building. The door had fallen off its hinges, so it wasn’t too hard to get in. I could instantly smell the rotting wood and mildew as I walked further into the building. I wanted to gag, but with a swift slipping on of a bandana I was back on track. It had sort of a disguised beauty, watching the dust float tenderly past the aged windows, seeing all the sunbleached paintings and posters of local shows, the beautiful carpet lining the hallways. I walked all through the empty corridors, exploring all rooms but one. The basement. I have never usually been creeped out by basements, but something felt, weird. I couldn’t explain it if I tried, but in the midst of my stupid teen brain, I went down. As I made my way down those decrepit wooden stairs, I was suddenly met with the worst, most absolutely harrowing stench any human could bare. The overwhelming odor of stale iron, feces, vomit and any other bodily fluid and harsh chemical hung in the air like a putrescent car freshener. I keeled over and lurched at the sensation of that smell that made the mildew smell like apples and cinnamon, leaving the taste of acid in my mouth. As I gathered myself off of the stairs, I ventured further down the stairs, pushing past that awful odor with all the strength I could muster. The further in I went the darker it got, but not quite dark enough to where it was pitch black, can’t-see-your-hand-in-front-of-your-face dark. I wandered through the maze of boxes, filled with old needles, rotting food and such, when suddenly I heard a faint, gargled, gasp, followed by an earsplitting screech of grinding metal that shook me to my core. I was scared out of my fucking wits, I don’t know why I didn’t just stop right there and run for my life. I guess I was trying to convince myself it wasn’t real, or that it was just shifting objects. My entire body trembled violently as I investigated further, only to find the source of that horrendous noise. There, in the clearing of boxes, was the literal embodiment of a nightmare. I couldn’t see much, but what I saw made me freeze dead in my tracks. This….whatever it was, was chained to a pole by the neck. Its face lacked everything but a mouth, filled with bile, blood and all other sorts of fluids that discharged that stomach wrenching odor from before. It’s arms looked like they has been taken from three different people and the bones all poorly screwed together beneath its tightly stretched layer of leathery skin. With every move it made, the nauseating snapping of bones loudly falling in and out of place as it crawled around, digging its long, unnatural and razor sharp fingers into the ground to pull itself forward. I was completely and utterly mortified, words cannot describe the absolute terror I felt as I watched that hideous creature go about its business. I tried to scream, but any noise that tried to escape caught in my throat like a breath trying to escape while you’re being hanged at the gallows. I stepped back to leave, praying to god that I go unnoticed, but I slipped, landing with a loud crash. At that moment I felt with every bone in my body that my life was over. The creature snapped its head towards mine, the most spine chilling crackle I have ever heard ripped through my eardrums as it let out the most blood curdling scream and with its claws, ripped away at the skin where its eyes should have been to show a gut wrenching pit filled with hundreds of stink bugs, the vile insects pouring out of it sockets as it sprinted towards me. With my life at stake I got up and sprinted past all the boxes shoving my way to the light of the door. My heart throbbed painfully as I pushed with all my strength to get out the door. I could hear the beasts footfall all the way to the stairs, only to have them vanish once I was up and out the door, but there was no way in hell I was going to risk it. I sprinted the entire way out of town and about three quarters of the mile home before I stopped and collapsed on the side of the road. After throwing up for what seemed like ages I finally gathered up the strength to stumble home. I burst in the door and deadbolted it before collapsing on the living room floor and sobbing. All I felt was fear, what if that thing escaped, what if it got to my family. At least my second question was answered when my parents strolled in the living room to see me and rush to my side asking if I was okay, the groceries spilled all over the floor without a care. I explained to them what happened and the next day they took me to a counselor. So now I apparently have Schizophrenia, and 15 pills a day keeps the monster away. So that kinda catches you up on my story. What my shyness brought to me instead of just sucking it up and talking to someone. But I’m pretty sure it doesn’t matter now. That smell is back, and there’s a stink bug crawling along my computer screen…