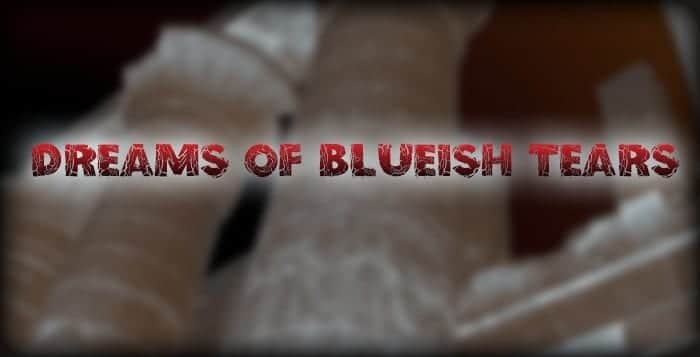 26 May Dreams of Blueish Tears

I found myself having to make a massive effort to be able to see though the dust that sailed through the air. With each tiny sand grain hitting my cornea it became harder and harder to see anything clearly. I held onto my mother’s hand tightly and not too long thereafter we reached our destination. It was cold and dark, but the light from the lantern which my mother was holding illuminated our faces and the dusty stairs in front of us. She smiled, carefully sweeping the dust out of my thick brown hair. “It’ll be fine, wouldn’t it be great if we’d even get to see a mummy or two huh?” She said, accompanied by the most loving laugh a person could know.

We walked down the steps slowly, taking in every fascinating detail that had been carved into the walls. It was as exciting as every other time we had visited some sort of ancient place. My mother had always been interested in traveling the world, and she had always loved history. I enjoyed it too, it was always nice to see new things, and to learn about our ancestors.

The sound of her boots as she walked filled the empty void to such an extent that it almost crippled my psyche. With each step I realised, without her by my side there would be no sound at all. I would be lost, not knowing anything about the darkness surrounding me. I got ripped back into reality once hearing her shouting my name. “Are you okay mom?” I said as I walked over to the room where she was sitting, viewing the carvings on the walls. “Isn’t this little thing beautiful? I’ve never seen anything like it.” She said, holding it in her hands. I sat down next to her, fascinated by the wooden carving she was holding. Upon reaching over to touch it I felt a strange sensation within my body which made my hand shake violently. I shrugged back in confusion. “Did the Egyptians even know what an owl looked like back then?”

My mother, as stubborn as she was, held onto the statue no matter how I explained my hatred towards it. It made me feel very uncomfortable, yet I had to agree with her. It would be an utterly beautiful souvenir. We walked down hallway after hallway, explored room after room. Each just as full of mysteries as the next. I must admit. At the time it seemed like one of the best days of my entire life.

Upon reaching one of the biggest rooms we’d seen so far my mother fell to the ground in pain, leaving the lantern falling to her side as she did so. I sat down holding my arms around her repeatedly asking her what was wrong, but she didn’t respond. She was sweating and screaming out of pain, looking like she was on the edge of suffocating to death.

That’s when I saw the faint blueish glow coming from within her bag. I didn’t want to touch it.

Despite my childish fears, I opened her bag in a haste and grabbed the statue. It wasn’t until then that I saw that it really wasn’t an owl. It was some sort of animal I’d never seen before. For just a second I was lost in its light blue eyes. It stared at me, as if gazing into my very soul. There was nothing else I could do. I didn’t know how to save my mother.

Once I managed to look away from the figure I realised it had probably been hours since I first took it out of her bag. My mother laid cold on the ground before me, not moving as much as a muscle. I shrugged back in horror and confusion, screaming and screaming constantly attempting to rip her back into consciousness. After minutes of panic and complete rage I laid my head on her stomach and felt my tears sink into her navy blue shirt. Even like this, she was just as beautiful as she had always been. Her smile, lighting up her face in a way it only did when she seemed truly fascinated by something spectacular. Normally, It would fill my heart with a peculiar warmth, but now within the depths of my sorrowful state of mind I shrugged at the thought of her cold, stone-like face. Even more of it forming a facial expression of pure.. bliss.

The figure remained motionless in the distance, the dust infused air making it difficult for me to make out any specific details in it’s horrific appearance. Looking up at it I flew back in terror, still clutching my mother’s body in my weakened arms. Tears streamed down my face as it approached me, it’s eyes unleashing a faint blueish glow over me and my loved one. Its animalistic features did not seem natural. Sharp feathers stack out of its skin, followed by a stream of thick red liquid, almost as if they’d been shoved into its flesh with such force that it’d be impossible to rip them back out. They were faintly beige, decorated in black and light brown details across the sharp, blade-like ends. But most disturbing of all was it’s eyes. It’s eye sockets covered a much larger area of its face than what was necessary, making the moist excess flesh beneath its eyes dangle and drip with a liquid I was unable to identify.

Waking up from my dream-like state I screamed and threw the decorative wooden figure in its direction, which made it shriek with pain as it’s feathers got shoved deeper into its skin. The thought of leaving my mother behind was unbearable, no matter the stillness in her eyes. But I knew what had to be done.

I swiftly got up on my feet and rounded the figure, proceeding deeper down into the ruins. I felt my own sweat run down my cold face and each sharp breath cutting through my throat like a sharpened dagger, making it immensely difficult to breathe as I ran down the hallways. I ran and ran, never stopping, never once looking back. Till my lungs at last failed me, and my legs folded beneath my body, aching with pain.

I fell to the ground with a loud thud, watching the dark corridor lighten up by an all too familiar glow. Slowly I felt how bruises formed across my arms and legs as I was dragged back towards the nearest staircase. My vision began to blur.. leaving me helpless at the fangs of my enemy. Till I was left unconscious in the darkness with the unmistakable smell of decay being my sole company.

I awoke to the aching pain in my head, sending a new wave of agony through my body with each pounding motion. In an attempt to raise my hand to touch the wound I realised.. I was laying on grass. I opened my eyes as a result of the shocking discovery, and could not comprehend what it was that I was seeing. The image of my surroundings melted as I tried to focus on it, leaving me unable to fully make out where I was or how I’d gotten there. As I tried to get back up on my feet I sank deep into the ground, almost as if I was swimming in water. Confused and afraid I tried to grab anything that could help me get out of the murky liquid, but failed miserably. I cried, watching my tears drip into the water. After minutes of desperately attempting not to drown, I felt myself sink beneath the surface.

I closed my eyes tightly, holding my breath as best as I could. My throat tightened, and I felt my chest bump in and out as I helplessly tried not to take another breath. The last few bubbles left my cold lips and I felt an undying feeling of horror as I allowed the liquid to fill my lungs and swallowed the darkness.

I awoke with a gasp, like surfacing for air, and it was over. I checked my surroundings in confusion and realised I was back in my room. The blue walls covered in tiny yellow stars filled my heart with warmth and excitement. “It had only been a dream”, I thought to myself, laughing softly. I jumped out of my bed, looking back at the Spider-Man covers a couple of times before exiting the room, just to ensure myself that I really was awake.

“Mom!” I yelled happily, running down the hallway to her bedroom. Upon ripping the door open the horrible scent and warmth accompanying it hit me like a truck. I stumbled backwards, coughing and holding my hands tightly against my nose and mouth. “Mom…?” I said quietly, my voice stumbling over each letter. My hand begun shaking as I pushed the door fully open and stumbled inside. The smell was almost unbearable at this point.

I looked up at the woman standing a few metres in front of me in the darkness, though I was unable to see her clearly. She ran towards me clutching my arm as she passed me by. We both flew out of the dark, out of the unbearable scent of death. She held me close, gasping for air as she sobbed. I gazed up at her, still confused over the situation. “Don’t worry honey, everything is going to be just fine.” She said, her blue eyes shimmering in the shadows. She broke eye contact with me after a while and kept running down the stairs, still holding my arm in a firm grip.

We never went back to our old apartment.. After that one peculiar night my mother was never the same. For long she refused to eat, refused to sleep, and I often caught her staring out into the void at the most odd of times. I understand her, now that I’ve grown older and realised what she really witnessed that night. After all, I miss my dad too.

Of course, I didn’t tell her about my strange nightmare. But I’ve always been confused over one specific matter..

My mother’s eyes had always been green.