When I was in college, I developed a bad habit. No, not alcohol or drugs, something far tamer than those. I developed a habit of sleeping in class. You see, it seemed as though every class I had fell right after a meal: breakfast, then comp sci, lunch, then general biology, dinner, then statistics. As a result, I tended to drift off as the professors lectured. However, it was an incident that occurred during that last class that finally broke me of the habit for good.

Most of my classes were held in lecture halls at the science center, a large, multi-storied, concrete building with little in the way of decor. From the outside, it looked more like a parking garage or a penitentiary than an educational facility. Inside wasn’t much better, a drab, featureless interior full of the same bland, concrete walls and dull fluorescent lighting. Only a small area on the third floor dedicated to offices for the various staff had anything that added color to the place.

One evening, after a meal from the student union, I sat in the back row of my statistics course, feeling the tug of my eyelids as the professor droned on down in the front of the auditorium and my stomach digested my dinner. You never notice yourself going to sleep unless you’re actively fighting it, and I was not one to wage war on myself, so it wasn’t long before I was out, chin in my hands, pen dangling from my fingertips, hunched over a notebook full of scribbles.

It wasn’t unusual for the teacher to notice when someone was snoozing in the middle of a lecture. Half the time it seemed like they didn’t care. They’re not paid to wake you up, after all. If you’re not paying attention, they’re not going to suffer a pay cut when you flunk out. But some still take a moment to call your name, try to snap you out of it. So when I heard my name being called in the middle of sleep’s dark embrace, I quickly snapped to attention and responded.

My face got really hot, anticipating the laughter of the other students, but the moment quickly faded as I realized I was sitting alone in a dark and empty classroom. Looking at my watch, I realized that I’d actually managed to doze off through the entire hour and then some, and it was already past nine o’clock. Nobody had bothered to wake me, either as a joke out of sheer obliviousness.

Then I sat there wondering, who called my name? I could still hear the voice in my head, leaving me to wonder if maybe it had been a dream.

But then the voice came again. It was low, echoing in the empty room, clearly not my imagination. The auditorium was dark, but I could still make out much of the interior and the empty seats from the smidgen of yellow light that came through one of the exits, especially from my position at the top back row.

“Hello?” I called out into the empty blackness.

Several steps down and to my left, something shuffled, moving along the row of seats. I couldn’t see it, but from the sound of it, it seemed to be coming in my direction. Instinctively, my heart started racing and I stood up, fumbling in the dark to find my books and get out of there. My pen fell to the floor and rolled off the edge of the level I was on, and for the briefest moment I had the insane thought that I needed to go get it. But then the shuffling stopped and the room went quiet and I stood frozen in my spot, holding my breath and feeling my heart beating in my ears.

It felt like minutes went by standing in that uncanny silence. I swear the only sound seemed to be the faint ticking of my watch. The need to move, to get out of that room was overwhelming, but some lingering thought in the back of my mind wanted to hear whoever it was, whatever it was, and know that I wasn’t going crazy.

It obliged, finally breaking the silence by calling out my name again, not with a friendly, curious voice, but one almost devoid of emotion, like a parrot repeating the sounds its owner makes but not knowing what they mean. When I gave no response it moved with a brushing noise akin to someone crawling on their hands and knees, then called again.

I couldn’t hold my breath in any longer, and I exhaled raggedly, my entire body shaking with fear. It was enough, and the shuffling came again, almost frenetic, moving to the middle of the aisle then up the steps toward where I stood. Finally, my fight or flight response kicked in and gripping my books tightly under one arm I dashed for the other end of the row, nearly tripping over my own feet. Looking back over my shoulder, the room was still incredibly dark, but there was enough contrast between the shadows and the objects that I could just make out the form of whatever it was coming up around the edge of the desks.

It had the appearance of a human being, but its gait seemed more like that of a crab, walking on both hands and feet with its knees and elbows bent and its back arched at an agonizing-looking angle. Something about its head also seemed off, the way it bobbed as the thing scuttled, like it wasn’t fully attached.

The nightmare realized that I was on the move and began scrambling up onto the desktops in a bee-line straight for me. As it clambered across the row, it started making this awful gibbering sound with an unnerving excitement to it. glucklugluglugluck I can’t adequately describe the noise, but it put the fear of God in me. Any faint notion I had that I was being pranked went right out the window when that thing came at me.

I hit the wall hard, bruising my shoulder and tumbled down the steps toward the front of the room. Through sheer determination I managed to keep myself on my feet and tore out of that classroom without looking back. Nobody was in the hall, in fact nobody seemed to be in that part of the building at all. And why would they be? There weren’t any classes that late at night, and all the offices and study areas were two stories up. The exit to the building was dark, almost as dark as the lecture hall, but I didn’t care, I bolted out into the crisp night air, startling several people who were walking past, and didn’t stop running until I’d made it back to my dormitory where I hid in my room with the lights on, door locked, and shades drawn until my roommate returned.

So what was it? I don’t really know. My strongest suspicion is based on a story I learned later while talking about the incident with a grad student who had been studying at the school for years. According to her, when the center was first being built, one of the construction workers paving the roof wasn’t watching where he was going and stepped on a skylight that happened to be set over a stairwell. He plunged three stories, striking the railing several times and landing on his neck, killing him instantly. Whether that story is true or not, I can’t be sure. I couldn’t find any news articles about construction accidents, and none of the professors I asked would verify it. Nobody else has described experiencing anything like it either.

I’ll tell you though, after that I didn’t visit the science center after dark, and I sure as Hell never fell asleep in class again.

From veteran short horror author William Dalphin comes Don’t Look Away, a chilling compendium of 35 hair-raising, handpicked tales, illustrated by Emily Holt. Each of the dozens of stories in Dalphin’s frightening debut collection is bound to tingle your spine and leave you looking over your shoulder. If you enjoy a good shudder, Dalphin’s terrifying tome will satisfy your craving for the macabre. But be prepared… Lock your doors, check your windows, and whatever you do… don’t look away. 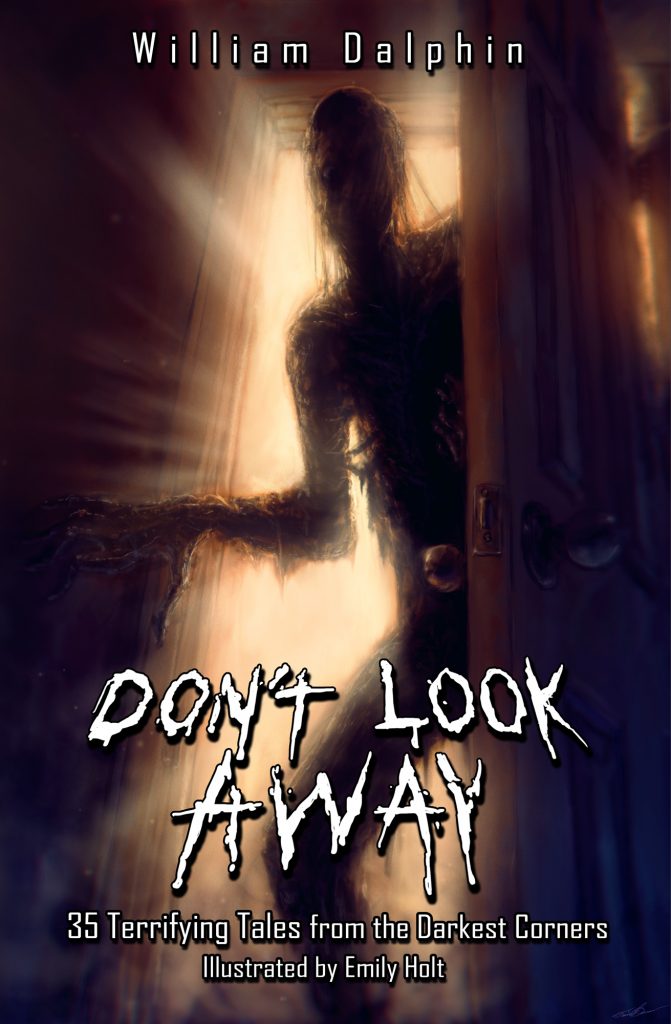