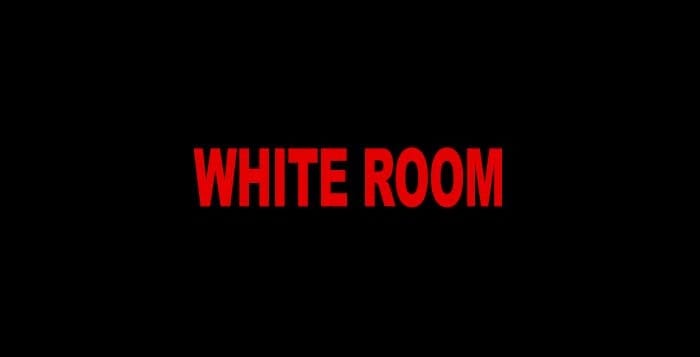 Posted at 04:41h in Deaths, Murders, and Disappearances, Locations and Sites, Strange and Unexplained, Suspense and Thrillers by Creepypasta 0 Comments
Please wait...

The subjects awoke in what looked to be a huge room With large mirrors on the walls above.
The concrete walls and floor were painted white, very recently too
As some parts were still drying.
All three were dressed in white
Jumpsuits.

The man stood up holding his head like he had a hangover and then looked over
And saw his cellmates; A woman and a child. He first thought they were mother and child.
The woman on her hands and knees was struggling to get up,
But The child (who was an 8 year old boy) helped her.

“Hey!” The man shouted Startling
Them.
“Who are you! And Where am i?”
Feeling like she just woke up from sleeping on a concrete floor she caughs out
” *caugh* I know about as much as you *caugh* sir”
The woman stood up to her feet with help from the boy.
“But that is a good question”
The man and woman looked at the boy,
“Uhh…i don’t know” the boy said awkwardly while adverting eye contact
And twisting the tip of his shoe on the floor.
That was the best case he could make.

The man calmed down.
“maybe this is jail or something.
Maybe I got fucked up and they brought me in”.
“Watch your mouth in front of this child!”
The woman angrily said to him.
she reminded both the guys of their mothers.
“It’s okay, I’ve heard worse at school”
The boy told them that, but he also gave off the impression
That he didn’t cuss, when in fact, he could cuss with the best of em.

“So y’all two got zonked, but I don’t know why I’m here. All I remember was walking home after school”

“You’re pretty young to be walking home after school”
The man asserted.

“Hey I Didn’t get “zonked” alright, I was at my job on a 12 hour shift last thing I remembered.” The woman retorted,
As the boy started laughing at her
Frustration.

Suddenly the alerted group turned their heads to the loud sound,
like deer catching wind of something.

A gate began to open, a dark hole revealing itself.

The opening was rather small, but first thoughts were that maybe it’s a wayout! Maybe we could fit through there,
we could get out and get…

Four long objects began emerging from the darkness. The objects looked like pointy bones with an edge on them. Following them, A large Limb reached out from the black hole…
They weren’t scared yet, they didn’t
understand what was happening,
what was coming for them.
The young boy who you will not know the name of, figures it out first.
that was a hand, with claws coming out of its five fingers; it had scales.

The reptillen claw grabbed the side of the cage, then another appeared and grabbed the other side, IT pulled it self out of the dark hole and slunk to the ground.

There was nothing they could do,
Their minds to busy racing with confusion and terror to realize What was about to happen to them.
All they could do was stare at the Thing in a state of What In Gods Name Is That…

It stood up straight on it’s raptor like feet, from the distance of about 50 yards (half the distance of the big white cell)
it looked like a Big Man holding about 10 machetes who’d been burnt to black.

From about 20 yards,
It was a Monster out of your worst Nightmares. standing still, with arms stretching out, twisting it’s head and neck about, like it had been stuck in that damned cramp hole for too long.
Dark black and red Scales covered it’s body, it’s head hung at its shoulders,
It’s mouth no wider than a humans,
filled with sharp teeth.
It’s arms lowering to it’s side’s,
It’s long claws clanging together.
Then, the creatures glowing Red eyes met the group’s.

Frozen in absolute fear, not a sound made, not a muscle moved, as the three stood still like statues; unable to make their bodies do anything; their bodies knew better.

They could feel themselves being pierced by it’s gaze.
Those Red Eyes stared into them with absolute joy; joy for what It’s about to do to them…

The boy was frightened, holding to the women like he did With his mother when he was smaller. (He was one of those kids that wiped his mom’s kisses off his face because he believed he was to old for such things.)
She wrapped her arms around him, Protecting him.

Of the three, the man was an atheist.
He always said of God “I’ll believe it when I see it”.
In that short moment of dead silence, converting him would have been easy. He was sure that he was being stared down by a Demon that just crawled out of Hell right before his eyes.

The woman was Thinking that…
“OH GOD!”
The Creature Lunges towards them, screaming at them loud with a deep guteral Screeching,
ITS COMING FOR THEM.
Moving at an inhuman speed, Their eyes couldn’t track it if it hadn’t Been B linening straight for them.

50 yards of space was gone in the blank of an eye, the monster’s bloodthirst
Hadn’t been quenched in such a long time, and it wanted to kill them so badly.
In a futile move, the man pushed the woman and boy in front of him,
He turned around and began to run,
Screaming and crying harder than the woman and child.

The two on the ground were helpless.
Holding each other tight, as they closed their eyes and waited…
But the moment they waited for didn’t come. Not yet.

Her eyes opened for a glimpse, but nothing was there.
A moment of relief was met with a
Another terrible silence.
she turned her head, she looked and saw…10 feet away…

The man was just Standing there but…no he wasn’t standing…his feet were not touching the ground.
Her eyes honed in on the face above the man’s head. That face…it looked like a big smile. No skin or lips around the mouth, just exposed sharp teeth.

It Was holding him up effortlessly with one clawed hand, but there was no blood. the man was shaking uncontrolably.
Staring into its eyes.
She could hear him whispering
“God Help Me, someone Save me…”
The Devils free hand rose up slowly
as the man’s eyes followed,
Scraping it’s claws together making the last sound he’ll ever here.
“GOD N-…” Was all she heard as she closed her eyes tighter then before.
Right as Its hand swiped across.

She felt blood raining down on her head and her eyes came open again.
The same sight as before, but this time
There was no head. Just Blood spewing
From where it use to be.
what was left of the neck was
Sticking up, puking out filth
With a little white sharp piece of neck bone poking out, separating the flow and Spraying it everywhere like a sprinkler.
What she didn’t see was his head
Splitting like a watermelon,
becoming a red stain in It’s hand.

The Creature slung the corpse away
After it’s amusement had faded.
She didn’t close her eyes again.
She knew she had to do something.
But there was nothing she could do.

She stood up, the kid was scared to death and wouldn’t let her go.
She pushed him away and yelled at him
“Just…” and she was cut off.
The boy reminded her of her little brother; She was very protective of him.
In this situation, She acted out of instinct.
In her mind she was going to distract the creature so the boy could run away, maybe he could jump in that hole and escape, but the creature in a movement so swift-that not even the boy could have warned her in time-penetrated her through the nap of her neck and out through her throat with the tip of it’s sharped finger in a “come over here” gesture.

Solid red trickles raced down the chest of her white jump suit. her lips moved one more time, “run…”. The nail pulled from her throat, and the full set came back with such a force, her body was turned Into…the boy initially saw just a cloud of red…disapating.
what was left, wasn’t even a body anymore.
The boy didn’t have a semblance, or
a single hope of fathoming the Horror
In front of him.

His body went into auto pilot, getting up and running as fast as he could,
But Even if he did survive this, he would never get over something like this.
For sure, His well being was forever lost after this.

But The thing did not chase him.
The boy hit the corner opposite of the the gate where the monster came from.
His back to the corner, looking right at it…It didn’t move…The Creature shook blood and bloody chunks from its knives and started walking back to the gate.
The small cage still open, the creature stepped in, The boy did not take his eyes off of it. It turned and Looked back at the boy, 100 yards on the other side of the cell. The boy saw the red eyes,
He covered his eyes.
The gate closed.

The boys name was zack.
Zack was a good kid.
He wanted to play baseball
But his mom wouldn’t let him start
Until his grades came up.
He didn’t know why he was here,
The very last thing he remembered was
Walking home from school (because he lived just a few blocks away.)
He heard the gates close, he didn’t move at all; he Stayed put. Nothing happened.
He was waiting for someone to come.
Maybe his mother and father will come
Find him.
Hours went by, though it was much longer to him. he finally stands up, shaking because his nerves are no longer stable. He walks with his eyes locked on the gate. He can’t even begin to gather his thoughts, let alone wonder on a way out.
But Something caught his eye.
He focused as far as his could tell.
There was something next to the gate like a black line, a crack, no…A gap…
The gate…it wasn’t closed.

In that moment,
He didn’t feel anything…
He didn’t feel the puncturing of his flesh,
He didn’t feel his spinal chord sever,
He didn’t even feel his insides turn into something you’d see in a blender ad.
He’s body was in shock, overwhelmed
With processing pain.
Just a little movement was left in his neck.
He could only look around aimlessly,
No understanding of what has happened to him, until he looked down. in his blurring vision he saw four long white things that looked like dinosaur teeth; covered in red.
Two of them had grazed his side’s, while two wear going through him.
blood erupted in his throat,
he choked on it, coughing up what little life was left in his young body.
The claws redacted and the boy fell lifeless like a rag doll.
The pool of blood he layed in looked like a mudpuddle that he might have played in Once a long time ago.
The last thing he could see, or thought he saw, was his mother.
She was telling him to come inside and clean up.