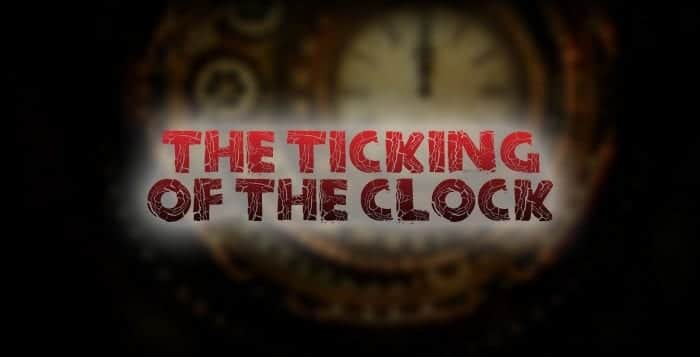 15 Aug The Ticking of The Clock

"The Ticking of The Clock"

“There are no clocks in Hell, only an eternal ticking…”
– Bridaine

He walked inside, a man’s man, home from a hard day of labor, in no mood for sass or foolishness, brutal discipline at the ready, silence dominating… save the ticking of the clock. According to their training, his family sat still, remained obedient. And as the pendulum moved within the table clock’s dark cherry body, his fingers running over the oily smooth surface, the tick-tock sound echoing throughout the cabin, he needed only a nod to impart his command.

She sat at the dinner table, her back to her husband. Affection was beaten out her long ago and she did not dare to greet him. With fine china set properly before her, a thick layer of dust covering it, she mumbled and laughed, an early 50s game show playing through her mind, her delusional part that of a cheery contestant. Not that she would have known if it was, but the command was not for her.

Nor was it for his eldest son sitting at the other end of the table, carving his arm with a dinner knife. Blood rolled to the stained table cloth below, his eyes twitching and his lips tightening with every stroke of the blade.

His daughter, such a gorgeous young girl, the body of a woman blossoming around her fourteen year old mind, reacted with haste: She sprung up from the couch and disappeared into the kitchen. She returned with an ice cold bottle of beer, walking past the little boy sitting in the corner, playing with his only toy – a small beanbag – over and over again, tossing it high, catching it midair.

The man said nothing as he took the beer, his daughter sitting down next to him. After quenching his thirst he put the bottle down, turned toward his daughter and she turned her back to him – just as he wanted. Her hair was so soft, long and light brown, smelling of lilac and femininity, and he ran his fingers through it.

The ticking of the clock remained constant, but perhaps grew louder, more imposing with every turn of the interlocking mechanisms that made up its inner workings… grating on nerves, invading the deepest recesses of the mind, soothing and disturbing all at once…

A toss of the beanbag high in the air… a gleeful gasp from the contestant… a deep cut into a previous scar… eyes closed tight as her mind went away… the man moving from silky smooth hair to creamy smooth skin, caressing her shoulders, kissing her neck…

The little boy threw the beanbag higher into the air each time. When he plucked it from its fall, a cascading rush of noise broke the silence… and the man’s concentration.

“Be silent, boy, or I will butcher you and feed you to them for supper.”

Holding his beanbag tight, the little boy bowed his head, looking away from his father. The man turned back to his daughter and put his hands down into her shirt, his fingers moving underneath the straps of her undergarments. The ticking of the clock was now more piercing, its rhythm irresistible and completely invasive. Light from oil lamps shimmered off of the face of the clock, the arms unnaturally moving counter-clockwise and then back again…

The little boy squeezed the beanbag close to him… the contestant shaking her head in disbelief (she won, she won!)… the knife now buried half way into arm meat… the man pinching nipples while lapping her face with his tongue…

The threat of violence was forgotten by the little boy. He stood up and tossed the beanbag once more into the air. Taking a step forward, he lunged to catch the beanbag. He stood still and looked at his father, gauging whether or not the man noticed him.

The little boy pushed his luck. The beanbag was launched from his hand, but it was too strong and it hurtled through the room, striking his father on the head.

The man was furious. He stood up and removed the thick leather belt from his pants. Petrified, the little boy did not move while the man walked toward him.

The eldest son slammed the knife into the table and screamed. His father changed direction and ran to the table. A crushing backhand knocking the boy across the room. Another backhand cleared the china from the table, and it crashed to the floor, a million pieces playing in a shattering symphony.
Inspired by the macabre concerto, his wife began to sing jaunty show tune.

The ticking of the clock was relentless now, deep black anger resounding throughout the house. Madness vibrated through their minds with every tick; with every tock, fear pulled them farther into the abyss. Shadows danced near by, excited specters of the oil lamp lights, evil joy exploding in celebration.

The man whipped the little boy, blood squirting from his face at first and then his back after he fell to the floor. Over and over he scourged his son, thick red liquid splashing him, rolling down the walls.
A scream came from behind the man and he turned to find the barrel of a shotgun pointed at his face. Tears pooled in his eldest son’s eyes. The man smirked and gave the boy a chance to show some balls, but he was a castrated disappointment. After taking the shotgun from his eldest son, the man issued him a buttstoke. Several teeth bounced off of the floor just before his son’s head did.

The little boy ran over to the couch and picked up his beanbag.

The woman sang with tragic gusto, her success in opera bringing her fame and fortune.

The young girl sat naked on the couch, waiting to perform her nightly duty.

The man pulled the trigger, splattering his eldest son’s brains all over the house.

The ticking of the clock sounded like laughter now, whining and screeching, high-pitched insanity shaking the walls. The shadows moving around the clock… triumphant, jubilant…

The man stepped over his dead eldest, stripping the clothes from his body, making his way to the couch. Almost imperceptible, but audible nonetheless, the cascade of the beans preceded the strike that followed square in the middle of his back.

The man turned around and grabbed the beanbag from the ground. The little boy ran through the cabin, trying to get away. Catching the movement from the corner of his eye, the man whirled around and threw the beanbag at his last remaining son.

As the beanbag struck the little boy in the head – the beans now weighing hundreds of pounds, each one of them – blood erupted from the crushed crater in his skull. The lifeless boy’s body careened into an end table, toppling it over. Unholy shadows streaked across the room as the oil lamp that sat upon the table fell, collided with the hardwood floor, and devoured everything nearby in a ferocious explosion. Flames raced throughout the cabin, helped along by dancing demons, yearning for the family to join them for all eternity.

The man lost his appetite for young female excitement and ran to the front door. He took hold of the door handle and screamed when his flesh melted on to it. He pulled and pushed and kicked, but the door would not open. He smashed his fists into the smoldering wood, smashed them until they were nothing but bloody pulp.

The ceiling broke apart, fire falling in on him from above. A support beam fell and crushed him, his neck twisting completely around, the clock his final sight. And the ticking of the clock was the last sound he heard before the demons welcomed him to hell.

The fire was brilliant, visible from miles away. There was no point in trying to alert the fire department, it would have taken almost an hour for any response to such a desolate place. Not that he would have called for help anyway.

By the time he arrived, the cabin was little more than a smoldering pile of ash. Load-bearing support beams jutted up from the ground, smoke pouring off of them like jagged, cockeyed chimneys. He parked his car and got out, purposely walking on the family name placard that had wafted onto the driveway, stepping on the family name of whom he despised.

Walking through the embers he made his way to the former center of the house. A smile played across his face. He found it standing upright, not a mark on it, the pendulum swinging and the mechanisms gracefully catching… the ticking of the clock soft and inviting.

He picked it up from the ground. Heat did not transfer from its body to his skin, no, instead the clock’s dark cherry body felt cold to the touch, oily and smooth. He dusted the ash from it and turned it over, also dusting the bottom to reveal the engraving.

A large circle of intertwined serpents… an inverted triangular star… the inlay adorned with a demonic angel on either side of the pentagram… above the carvings a beautifully inscribed warning:

He laughed at his wit. They had been too stupid to decipher his humor. He told Harrison that he would get the last laugh. He told them all, but they didn’t listen. They should have learned from what happened to the others. But no, they just ridiculed him, beat him up, broke his jaw, made a mockery of him.

Well, they were the ones who were suffering now… and he was the one ridiculing them.

As he walked back to the drive, he took inventory: Three down, one more to go. His revenge was almost complete. And nothing would stop him.

It was, after all, just a matter of time.