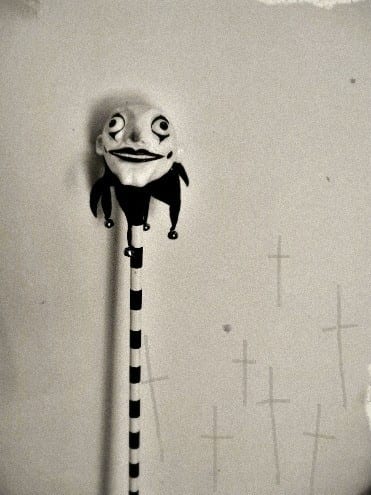 Posted at 00:00h in Artifacts and Objects by Creepypasta.com 20 Comments
Please wait...

This curious item once belonged to the English theatre actor James Fontaine. He was best known for playing the role of Hop-Frog, a jester character from the stage adaptation of Edgar Allan Poe’s story of the same name. It was during one particular performance in 1922 that he lost his life to a freak onstage accident; part of the set fell from above and decapitated him, flinging his head into the horrified audience.

After his death it was believed the prop was cursed because wherever it was kept fires kept breaking out, a strange coincidence as fire also plays a part in the story of Hop-Frog; the jester takes his revenge out on the king and his cabinet by setting them ablaze.

The prop is pictured here with the mysterious crosses which appeared on the walls of the late actor’s home after the death of seven close family members. The house was riddled with damp which seemed to disappear overnight leaving these ghostly markings. Visitors to the house have reported hearing eerie laughter and the sound of tinkling bells coming from the attic were the jester stick was kept locked away in a trunk. 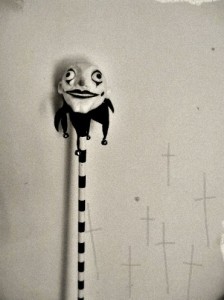