I think it was 1998 when my family visited my mother’s sister and her kids in North Yorkshire, England for a week. My family lived in Ohio, but my mother’s side of the family was from the UK. It was a fun trip, checking out the local sights and hanging out with my cousins. I was enjoying myself, at least until the Sunday towards the end of the outing.

My entire family is Christian, so we went to the church my aunt and cousins go to that day. What initially struck me about the building the most was the architecture. It was a large Gothic building that looked like it was from medieval times, but according to my mom, was built in the late 1800s. Even as a seven year old kid, I could tell it truly was an impressive building.

Looking back, I don’t remember what the service was about. I just remember sitting around in chapel afterward as my mother and aunt talked with some friends for a while. When I got bored of sitting and waiting, I looked around, examining the architecture. My eyes drifted around the room, but stopped when I spotted the man standing near the altar.

The first thing I noticed about him was how tall and thin he was, almost inhumanly so, but it was too far away to tell for sure. He did tower well over anyone I had ever seen, that’s for sure, but that wasn’t the weirdest thing about him. He was wearing a long black cloak with a hood. I couldn’t see his legs or arms, so the only visible part was his face.

Once again, it was too far away to see in great detail, but it looked like he was wearing a white rag or a veil that obscured everything from below the eyes, which were the only human part of him I could see. His dark eyes stood out against his pale skin, hardly darker than the white veil.

He immediately struck me as odd, even creepy, but it didn’t look like he was doing anything. He was simply standing there, looking around the room, just like I had been. I stared at him for about a minute, examining who had to have been the strangest person I had ever come across.

Then our eyes met.

It was only for a fraction of a second. I lowered the eyes the instant I had seen that we made eye contact, but that brief moment was enough to send me into a state of panic I was not prepared for. For the instant I could see him looking at me, fear struck me to my very core. My entire body got cold. My heart was racing in my chest. I don’t know what it was about it that frightened me so much, but for whatever reason, I was absolutely terrified.

I don’t remember how long I was looking down, scared out of my wits. It could have been ten seconds or two minutes. The entire time, I was sure that he was coming over to do who knew what. I was forced back into reality when I heard my mother say my name. I looked over at her, and she said it was time to leave.

It wasn’t until we were almost out of the room that I dared to look back to where the man was standing.

I never told anybody about what had happened that day, and I tried my best to forget about the whole experience myself. In fact, it wasn’t until very recently that I even thought about the incident for the first time in several years.

I’m in my twenties now, owning my own house and working a full-time job. I was thinking of something to do with my vacation time when it occurred to me that I could visit my cousin in England, who had a wife and family. I Skyped him and we talked a little about things we could do if I went over. He was telling me that we could drive down to see Stonehenge when something tugged at the back of my mind, a repressed memory that was nearly two decades old at point. I tried as nonchalantly as possible to ask him if he went to the same church he went to with his family back then.

His brow furrowed slightly when I asked, as if he suspected something. “No. Why do you ask?”

“Oh…uh, no reason.” I could tell from his facial expression that he wasn’t satisfied with that answer, so my mind scrambled to think of a good lie, since he wouldn’t have believed me if I told him the truth.

“It just…it just kinda creeped me out.”

I started recalling more about the day, and the emotions of that event came flooding back to me. I was so lost in my own thoughts that it took me a good ten seconds to notice that he had said something.

That wasn’t what I was expecting. It seemed so random that it was actually able to snap me back to reality again.

It occurred to me that that must have been the name of the church, but I was still completely lost.
“I have no idea what you’re talking about.”

He gave me a weird look, then just shrugged.

“Whatever. The point is, you won’t have to worry about it.”

We talked for ten more minutes or so, and the moment we wrapped it up and finished the call, I went to Google to look up “Newby church photo.”

I still get chills when I think about what I discovered.

The picture was not hard to find. It was clear right away that the first picture to come up in my search was what he was talking about. I digged a little deeper and got some background for the photo. Apparently, in 1963, a Reverend was taking photos in the church, and something was in the picture of the altar. Although the image could have been replicated with certain methods at that time, its authenticity has never been confirmed nor debunked.

Shown here is the image. Even after what I had experienced, I still don’t know what to think. 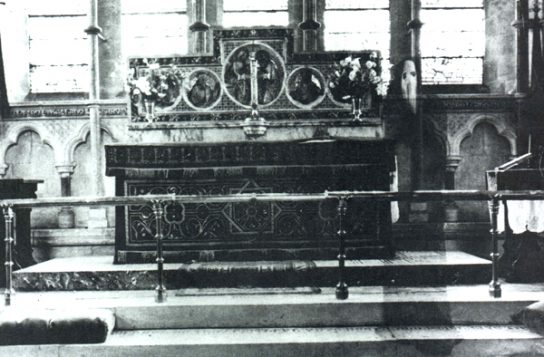