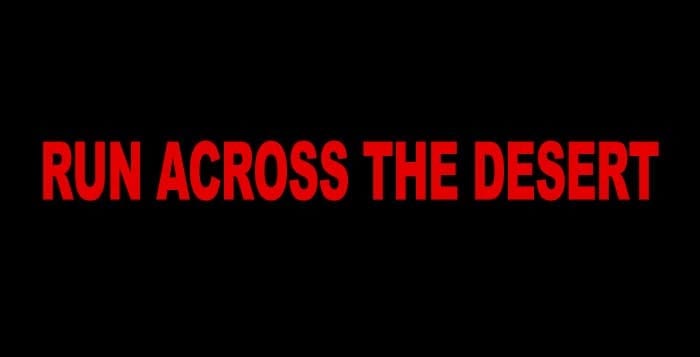 28 Mar Run Across the Desert

Posted at 11:42h in Beings and Entities, Ghosts and Spirits, Locations and Sites, Madness, Paranoia, and Mental Illness, Strange and Unexplained by Creepypasta 0 Comments
Please wait...

"Run Across the Desert"

A man stands in the desert. His skin is big bright white. Brighter than normal, a sharp sort of glowing white like lit up cellophane. This is the past to his present and he is not human.

Across many sand dunes, a line of cammels walks slowly towards the sun. They are burdened down by packs and dark skinned riders. These men have pourous skin that sweats, and long black whiskery beards, and dark eyes. And they are human. There are women with them. Hidden, perhaps less than human. Perhaps more.

The man is waiting for them. And although he could quickly traverse the distance, he does not feel like going to meet the dark skinned men. He is resigned to wait for them here.

A line of footprints travels directly across his path. The shadows in them crystalize. Edges crumbling. Punched into the smooth dune, ragged dark dark ragged black holes.

It travels the width of the desert. In a perfectly straight path.

The Arab men reach him. Their camals spit and flip their lips at the stranger. The men stare, and one of them jumps off his cammel.

He is a young boy. The son of the leader. He runs up to the stranger. Stares at him long in the face.

“*What are these?*”
The stranger points. It is a crudge gesture, with a crooked knuckle, pointing down at the sand. The line of footprints stretches atrociously out into infinity, punching holes in the deserts smooth skin, abomination.

The young man looks at them, and opens his mouth.
“They are bad omen. You are not from here. Who are you?”

The young man’s mind churns chaotically. It has been a long time since he has come into contact with men, and the stranger who looks like a man but is not finds it unpleasent and sickening to sort these random thoughts. It gives a sense of vertigo. But the story is there.

“***I have never seen someone run like that. Across the desert. In a straight line. She ran as if something worse than hell were following her. But nothing was. Only the night.

And in the Sahara, night is freezing cold. Anyone in their right mind would pitch a camp, try to sleep. But still she kept running. She had no camp. She had no pack, no weapon, no waterskin, that I saw. I thought she was desert spirit. I thought I was going mad, that my eyes were making things up.***”

The Arab shook his head. And he explains now half in words and half in thoughts. The white skinned stranger can hear both, and it is slightly more apealing to let the boy speak, rather than force him to think.

“How she ran. It was horrible.”

“I thought for sure, she was desert spirit. For sure. I thought I’d see her only once, that day she came staggering out of the sands and ran along side our caravan until the heat of the noonday sun. When we stopped for water, she went right on running. I thought, Desert spirit. Not a nice one.” ***evil witch, her clothes all black, made of cloth in foreign lands, a woman wearing mens clothes, whore…***

“Then Night came and I did not dream, and I thought, in the morning, forget her, you will not see her again.”

***Liar, I dreamed many dreams, God hates those who lie, but he cannot know what I dreamed, for I sinned, so bad…***
“Then one night three weeks later our Caravan took a short cut through the desert. It seems she did not know about the short cut, and went the long way, the straight way, because we saw her foot prints. They cut like a knife across the sand dunes, they mqde a straight line. I thought Impossible.
And then, there she was. Running. Out ahead of us. Our camals were walking slow, we did not want to rush them. My father said to send someone to catch up with her…go out and get her, bring her back. No one in their right minds runs through the sand like that, he said.
It was then that I know he see her too. The desert spirit. So either my father and I are both crazy, or she is really there, and she carry no water skin, she has not drank any water since three weeks ago. Impossible. Not good.”
“I went to my father and said no, do not go get her. Because I had very bad feeling about this. I tell my father what I saw three weeks ago. At first he does not believe me, but I tell him more, and finally he aknowledges, there is something wrong, maybe we should not send a rider to go get the floundering girl.”
***And I watch her weave and stagger, but still somehow her feet fall straight, and she is cutting a line through our desert, only slower and slower. I want her to die, I want the heat of the sun to burn her up, so I don’t see her in my dreams anymore…***
“So we leave her there. Slowly our caravan passes her. She is running slower and slower, you see, like she were growing tired. My camel finally pass her, I see her face. There is dread. Only dread. And in the pit of my stomach there is so much fear, I do not want to know what she is running from, I want only to see her go, far away, never come near me or my father or my family again.”

“*You said nothing followed her?*”

The young man is lying. In his memory, the stranger hears a last forsaken cry as the girl falls down, a screech and them a scream so tortured and sad that even he, at his many many eons of age, is tempted to try and actively forget it. It is of course impossible for him to forget. The human, Arab boy has the luxury of spending his short life in this sand whipped place pushing that memory away and away and away. The stranger with the white skin wonders cooly what it would feel like to envy him.

“You see I know when there is a curse. And to touch her or help her or even look at her, was cursed.” Now the Arab boy is pleading, trying to explain. As though leaving her was a crime. “So the caravan walk pass her, last thing I see is, she finally falls. And there is a little dark hump where her shoulders are, then the camels walk too far and I cannot see her any more. I breathed happy sigh of relief and went on.”

“*Ok.*” And that is all the stranger says. He makes a gesture. The boy runs back to his camel. He says several words to his father. The caravan moves on.

The stranger looks out over the line in the sand.

It is disheartening, to be human and know how big the desert is. He can sense some of this, though he does not share a mortal’s sense of fatal tradgety. In the footsteps, there is some kind of morbid taint, a shadow of darkness, or glowing particle, that he can trace. A radioactive signature, or a curse. Either one. Neither phrase in English can adequatly describe or explain what is going on.

The stranger sighs. “Altera, what have you done? Where have you gone?”

The footsteps do not answer, and stare back their malevolance at him.

Somewhere, unbeknownst to him, and forgotten by the Arab men, an ash white girl in black wool clothing hides under the shadow of a rock, frothing and foaming. Her eyes are black, and blood has dried around the rims of them. She has held this trace for 28 hours, or rather, been held in it, and there seems no returning, no end to the catotonic misma of eternity spinning endlessly around her head. It is giddy and dismal. And she waits.