Publisher’s Note: This story is part of the author’s Father Cooke series of interrelated stories. If you enjoy it, the author invites you to click here to read the other tales in the series.

Magister Alexander laughed at me. “This never gets old.” He picked up the pages I had printed off the internet and shuffled through them while shaking his head. “If I had a dollar for every time somebody screwed up a summoning spell, I’d be able to retire.”

“I can’t help you, and if I could, I probably wouldn’t. It is up to Father Cooke to decide if he wants to help you or not.” He used the pages to point to the priest sitting on the stool across the workbench from me. “I can give you some advice though. Next time you want to summon an imp, don’t print the ritual off the internet.” He tossed the pages onto the table in front of me.

“Lesson learned…now are you going to help me or not? This really hurts.” I whined to Father Cooke as I gestured to my left arm that was held in two large metal vice grips. One grip held my wrist while the other was clamped just below the elbow. It was the only thing I could find to keep my hand from causing any more trouble. That is why we were gathered around a workbench in my father’s machine shop.

My left hand responded to my pleas by giving me the middle finger.

“I can help you,” Father Cooke said, “but what reassurances do we have that you won’t do something like this again? You might not be so lucky next time. ”

“Trust me.” I tried to sound as convincing as I could under the current circumstances, “I have learned my lesson. Please just get it out of my arm.”

Father Cooke stared at me for several seconds as he made his decision. “Since we are already here, we might as well help you,” he sighed and then opened the large leather bag sitting on the table in front of him. “I hope you have suffered enough to have truly learned your lesson,” he added.

“I doubt he has suffered as much as the neighbor’s dog did,” Magister Alexander pointed out.

“That wasn’t my fault!” The Magister was acting as though I had actually killed the dog.

“It was the hand! I just leaned down to pet him like I always did…” The thought of what happened to the dog made me sick to my stomach. I hung my head in shame, only to glance down and notice the blood and flecks of viscera that still stained my pants.

“If you summoned it, then you are responsible for it.” Magister Alexander folded his arms over his chest, his face full of contempt.

My left hand gave a thumb’s up to his comment.

“If you aren’t going to help, at least be quiet.” Father Cooke chided his partner while he removed three items from his bag: a flask filled with a clear liquid, a small bible, and a simple wooden cross.

Once the items were laid out on the table my left hand began to frantically gesticulate with my fingers. I could only guess this was some form of sign language.

“Lefty has a point.” Magister Alexander stated after interpreting what my hand had spelled out.

“He claims that he is the real victim and he shouldn’t be punished for your stupidity.” He turned towards Father Cooke. “Lefty wants to plead his case. I don’t see why we shouldn’t let him.”

“You have got to be kidding me!” I couldn’t believe he was going to waste time listening to that thing. “It’s my hand!”

“True, but he claims to have information that might change our minds on how we handle your situation.” Magister Alexander countered.

“It’s a hand, what could it possible know?” I balked at the idea of my fate being decided by what my left hand was going to tell them.

“You aren’t in any immediate danger, and your problem is entirely your fault. I agree with Magister Alexander. I would like to hear what it has to say.” Father Cooke said.

My left hand made a fist and tried to pump it in the air to signify its victory, but the vice grip kept it from moving very far.

“Screw you!” I scoffed at my hand. It responded by slowly raising its middle finger. Then it began to spell things out to the Magister in sign language.

“One moment please,” Magister Alexander held his finger up while he pulled out a notebook and a pen. “Okay, you may proceed.”

We sat in silence for about fifteen minutes while Magister Alexander transcribed everything that was being said by my hand. When it was finished it clenched into a fist; except the pinky, which was fully extended.

Magister Alexander made the same gesture with his hand and locked his pinky around the pinky of my left hand. “Pinky swear,” he explained when he noticed Father Cooke’s raised eyebrows.

“Let’s see what we’ve got,” he read over the notes, “Interesting,” he said when he was finished.

He handed the notebook to Father Cooke, “Very interesting,” the priest agreed after reading it.

“Give us a moment.” Magister Alexander stood and indicated to Father Cooke that they should step away from the workbench and speak in private.

They talked in hushed voices for several minutes. At one point I thought I heard Father Cooke say, “That’s a bit harsh don’t you think?” That made me very nervous. Large beads of sweat started to pop up on my forehead as I waited for them to finish deliberating.

Both men returned to the workbench, but neither man sat down. Magister Alexander stood with his hands behind his back, a smirk on his face.

“We’ve come up with what we think is the best solution, given the new information your hand has presented us with. We are, of course, going to give you a chance to explain,” Father Cooke said to me.

“Okay…” I was starting to feel a little relieved. “What did it tell you?”

“There has been an increase in the number of spells and rituals popping up in the dark corners of the internet lately. We have been called in to deal with a few delicate issues relating to them, your current predicament included.”

“What does that have to do with me?” I didn’t know how the thing in my hand knew what I had done, but I wasn’t going to admit it. It was my word against its. “I’m a victim just like everyone else!”

“You…are a victim of your own stupidity. It was bound to catch up with you eventually,” Magister Alexander scolded me. “Did you really think we wouldn’t find out?”

“I don’t know what you are talking about.”

“Stop feigning ignorance.” Father Cooke held up his hand to silence me. “Our little friend has told us everything you did.”

“How could it possibly know anything, it’s a hand!” I argued.

“It’s a possessed hand,” Magister Alexander corrected me. “As such, it has access to your thoughts and memories. It just happens to be stuck, unable to move anywhere else in your body.”

“But..,” I tried to explain, but I couldn’t think of anything to say that would change their minds. I was caught. “Fine, I did it…,” I admitted. “I was using them to trade for the summoning spell. I didn’t know they’d be posted online for everyone to see.”

“Now, can you please help me?” I pleaded.

“We will,” Father Cooke said as he collected his things and placed them back in his bag. “But, you aren’t going to like the solution we agreed upon.”

That sounded ominous. “You aren’t going to perform the exorcism on my hand?” I asked Father Cooke.

“I thought he couldn’t exorcise demons.” I was confused. Even more so as I watched Father Cooke place a syringe, a roll of gauze, and a few other medical instruments I didn’t recognize onto the table from his bag.

“I can’t,” the Magister responded. “We decided the best way to help you and ensure something like this never happens again is to limit your ability to practice the arts.” He then revealed the large hand saw he was holding behind his back. “That is why I am going to exorcise your hand from your wrist.”

My left hand gave an enthusiastic thumbs up when it heard that.

Along the way, you will meet a young man who awoke to find a hole to another dimension in his arm, a couple whose painting is more than the simple portrait it appears to be, and a woman whose cat ate something it shouldn’t have. These are just a few of the unfortunate souls whose stories await you. Do you dare take a peek at the worlds that lie on the other side of the mole hole? 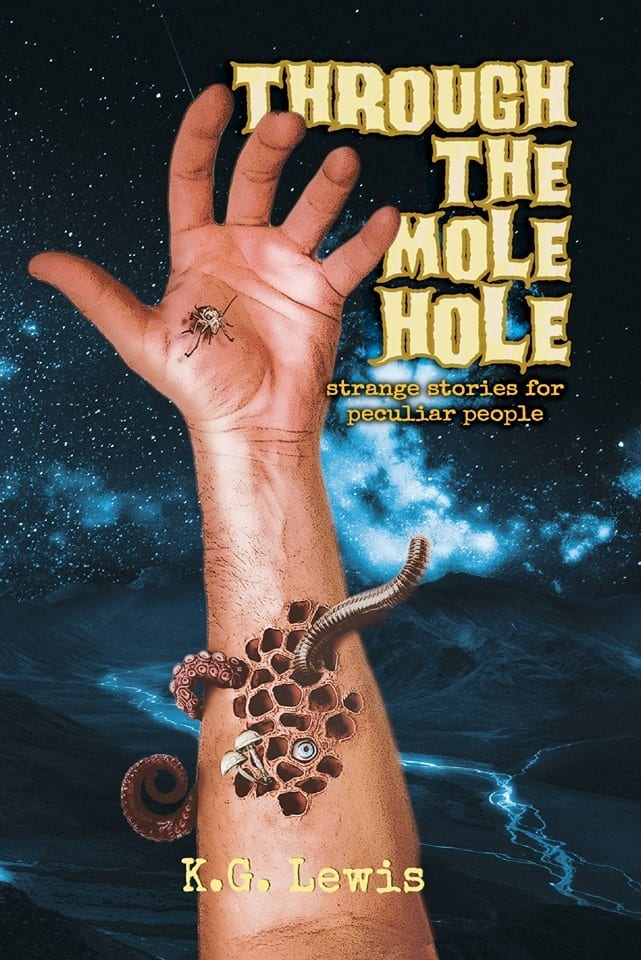