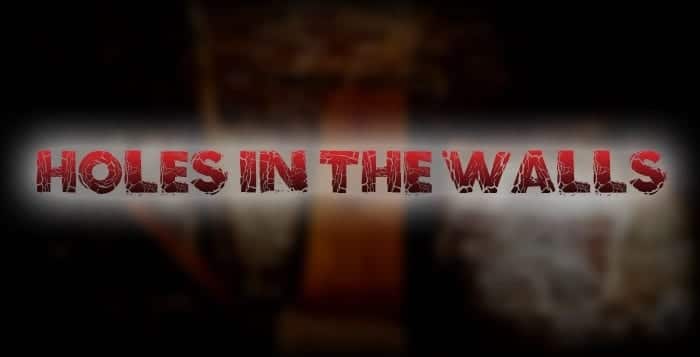 28 Jul Holes in the Walls

Posted at 13:16h in Locations and Sites by Creepypasta 10 Comments
Please wait...

"Holes in the Walls"

I stepped up the old, wooden steps of the porch, to what would be our new home. It was nice enough. It had a big back yard (fenced in with barbed wire) with a massive tree and a sturdy-looking tire swing. Most importantly, the neighboring houses were probably about a mile away each; this was country land, and you definitely smelled it. Occasionally the wind would carry over the smell of manure, and all you had to do is open a window – and bam, cow crap.

I wasn’t like most other sixteen-year-old girls, though; I didn’t throw a hormonal fit for my parents over moving to a less-than-perfect new home. Regardless, these things didn’t bother me too much, anyway. I guess I’ve always just been pretty laidback about stuff – life, really. I was mostly an introvert, so I never really had any friends, other than long-distance ones I had met and known for years through online multiplayer games. I was definitely a gamer, but I didn’t let that get in the way of my health; I didn’t feel right if I didn’t go jogging at least every three days. I loved to run, and occasionally I would pick up yoga to keep things interesting. Staying physically active helped my mood.

Enough about me. The interior of the house looked even nicer than the exterior did. I got a big bedroom upstairs with a window that looked out at the back yard. I was pretty happy with the place, except for one thing that really turned me off – a serial killer used to live in this house.

Yes, a serial killer. That’s why the price had dropped so low. He was apparently a doctor, too. Stanley Hutter was his name. He had worked at the hospital up in town not too far away, and would do the sickest things to his victims – he would get them inside his house (this one), and keep them down in the basement. He would torture and sexually assault them, but not before removing their vocal cords first. He would sew their eyes shut, and keep them tied up for the rest of their lives. Their limbs would eventually get stuck in the positions they were bound in, and could hardly be moved at all on their own. He would feed them through feeding tubes, and that was their life from that point forward, until they eventually died of infections, malnutrition, or bleeding injuries.

After he was caught, he was sentenced to life without parole… but he escaped. Nobody knew where he was now, but the police suspected that he still visited the house, because two entire families went missing a few months after moving in. After that, a high-tech security system was installed in and around the house, but nobody ever moved in after that…

…until we came along.

Now, if it weren’t for all of this, I would’ve really liked the place. But thanks to its history, I was always on edge.

The first night there, I decided to bring my yoga mat down into the furnished basement. None of us had gone down there yet, because that’s where he used to keep his victims.

It was the beginning of Spring, so it was still pretty chilly outside – and in the basement. But that wasn’t the only problem with the basement; it reeked. It smelled like something rotting, and it was coming from everywhere down there. Once I was down there, I decided to work on the temperature first. I immediately began searching for the thermostat, because each level of the house had its own. I found it, and turned it up a bit.

That feeling when it’s freezing and you’re waiting for the heaters to kick in and make a difference.
Only I never really felt much heat coming from the vents. The airflow was weak…very weak. There was something else about the basement that struck me as odd – there were holes in all of the thin wooden walls, about the size of golf balls.

Then I realized something; were there dead rodents in the walls? Was their stench coming in through the holes everywhere?

About the holes everywhere – there were at least 3 in every wall, at different heights, and nearly all of them had stains underneath, like something had at one point been leaking – or rotting – out of them. When I got close to one of them, soft puffs of warm air ventilated out of it into my face.

Were the heating pipes in the walls busted? Broken? Chewed-through somehow? The heat was coming out only a few of the holes, and it carried the stench of decay with it. Instead of being transferred to the vents in the basement, was the heat leaking out inside the walls?

I told my dad, who came downstairs to investigate. Except for me, none of my family had been down there. I’ve always been the more confrontational, do-what-I-want type of person, so the house’s history, although it deeply disturbed me, wasn’t going to bring down what I wanted…needed, to do, for my own health and self-esteem (despite my strong-willed behavior for things I wanted to do to be happy, I was bullied a lot in school, and had always had self-esteem issues).

My dad agreed with me about the stench, and said he would talk to the landlord about it tomorrow, as now it was nearing seven o’clock. After riding for so long, all of us were pretty tired, so we all ended up passing out on our beds earlier than we would normally go to sleep.

The next day went pretty smoothly. The movers came with the rest of our things (the first night we could only bring what would fit on the trailer), and after a long, laborious day of unpacking and setting things up, we finally settled into our new house. My dad had indeed contacted the landlord about the problem in the basement, but he wouldn’t be able to come by until tomorrow (go figure). This frustrated my dad, as well as me, but nothing could be done about it. We simply had to wait.

That night, I decided to actually do some yoga (which I was still fairly new to) in the basement, and just tough out the smell.

It was quiet down there that night… quiet and cold.

I rolled out my yoga mat in the middle of the biggest part of the basement, got positioned on top of it, and started doing my stretches. It was cold down there, but I was having a hard time focusing because I kept getting the feeling that I was being watched. The thought popped into my head at once:
Is that sick freak living in the walls, watching me through these holes?

The thought made me feel even colder, but I pushed it out of my mind. That was ridiculous. That kind of stuff only happens in movies and scary stories.

I turned the thermostat up higher. Like before, only a few of the holes were ventilating heat, and the actual vents were doing a sorry job. I made my way back to my yoga mat.

Then, I saw part of the wall on the other side of the basement start to wiggle, and to my horror, it slowly hinged open, creaking softly. It was a hidden door, and into the basement out of the walls, stepped a tall man in bloody scrubs, looking at me, smiling with big, crazed eyes. He was holding a scalpel.

I screamed, backing against the wall behind me, feeling the warm, stinky heat venting out against the back of my neck. The man rushed over and grabbed me, throwing me down to the floor and getting on top of me. He pressed his hand down over my mouth and held the scalpel to my throat, lowering his weight down on top of me.

“Be a good girl,” he whispered.

Without warning, my dad flung open the door to the basement, running down the stairs.

“Dad, help me!” I screamed, muffled under the man’s hand, but as loudly as I possibly could.

The man, whom I knew beyond a shadow of a doubt at this point was Stanley Hutter, jumped up off of me and lunged at my dad with the scalpel. My dad managed to dodge it, making it graze his forearm instead of sticking into his chest, and the next thing I know, the two of them are scuffling on the floor.

I did the one thing I could. When I saw my chance, I ran up and kicked Stanley in the side of the head with my toes upward, as hard as I could, knocking him to the floor next to my dad. The scalpel fell from his hand, and at that point I couldn’t stop myself. I ran over and grabbed it, held it over my head with the sharp end down, and stabbed it deep into Stanley’s throat.

“Die, you bastard!” I heard myself scream.

The police got there surprisingly quickly, but of course, Stanley was dead. I never got in any kind of trouble for killing him. After all, he was a wanted serial killer, and had attacked my dad and me. He no doubt would’ve tried to go after the rest of my family, too.

That was the end of Stanley Hutter. However, his secret residence wasn’t the only chilling revelation. When the police entered the area Stanley had emerged from, they found themselves venturing through spaces that had been regularly used for travel inside the walls, and eventually came across a dead body.

But that wasn’t all. A team came in and started tearing down all the thin, wooden, hole-ridden boards that made up the walls, and what I saw inside, was burned into my mind forever;

They had all been tightly bound to wooden posts, with their eyelids sewn shut, and their vocal cords removed. Every single one of those holes was lined up with the mouth of an emaciated person with brown, decaying teeth. The pipes were indeed cut in certain places, to make room for some of the victims. The walls were pressed tightly up against the bodies, so when they were torn down, most of the skin on their open lips was ripped off, as it had attached itself to the interior surface of the walls after being pressed against them for so long.

Those holes were breathing and feeding holes. That’s how Stanley fed them through their tubes. Being a doctor, he had operated on each one, extending their urethras and rectums with rubber tubes that merged into the house’s main sewage line. Many of them had died from infections in those areas.
The bodies blocked most of the heat from getting to the actual vents, not to mention the cutting of the pipes. But none of that heat should’ve been leaking out through the holes, because there simply wasn’t enough room in front of the victims’ mouths.

A total of twelve emaciated bodies, with reeking, rotting teeth and limbs were found inside those walls. Four of them were still alive…