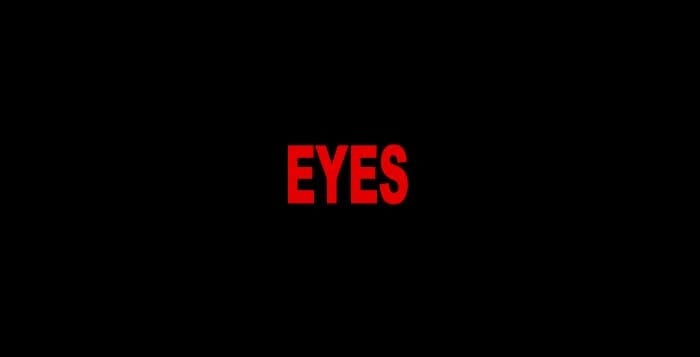 I’ve always had a thing about eyes. I mean, yeah, we all have them and some of them are super pretty, but that’s not what I mean. I mean eye stuff – things happening to, or wrong with, eyes – really creeps me out.

It started when I was a kid and I kept having a recurring nightmare about my brother poking his eye out with a stick. This never happened in real life, of course, but in my dreams, it was clear, bloody, and in super-slow motion.

Have you ever watched a late seventies or early eighties soap opera? When a character remembers something, or is dreaming, and suddenly the edges and corners of the television screen get all fuzzy? Well, in my dream, that’s how I see it. It’s all fuzzy around the edges. But, what’s happening center-screen is terribly, awfully clear.

My little brother is laughing like a lunatic, and I can only see the back of his head. I know we’ve been out in the yard playing, but his laugh is unsettling. He’s waving a stick around and laughing. He’s wearing a striped shirt, and blue-jean overalls. It’s all very clear. And then, he turns around and, still laughing, I see he’s gouged out his eyes with the stick! There’s blood dripping down his cheeks and he’s just laughing and laughing.

It’s so awful I wake up immediately. And now, as a full-grown adult, I still occasionally have this dream and it remains unchanged and no less scary.

When I was nineteen, I had an infection of the vitreous inside my eye. At first, the doctor thought it was simply another case of conjunctivitis (more popularly known as ‘pink eye’), but, after treating me for pink eye, it got worse rather than better.

I was taken to an eye specialist who diagnosed it – some ultra-long medical term I don’t remember – and finally got me on the right medication. I spent three months visiting that eye specialist every other day and, before it was over, I’d lost seventy percent of the vision in my right eye, and my left eye was beginning to follow suit. The doctor was afraid I was going blind. Needless-to-say, it was a frightening time for me.

When we’d finally beaten the infection, my vision began to return on its own. It was slow, but it was what we were hoping for. However, I’d been left with a life-long, ultra-sensitivity to light. At first, the doctor gave me these awful blue-tinted glasses which I was to wear all the time; inside and out. They were supposed to filter certain types of light to help my eyes continue to heal. Mostly, they were just annoying. At that time, it was the early nineties, and blue sunglasses were a thing. I remember being regularly annoyed at having to explain I was not wearing them as a fashion statement. To this day, I wear sunglasses most of the time. Sometimes even inside. If I don’t wear them, it feels like an ice pick being jabbed into my eyes. Lovely thought, eh?

A few months ago, I wound up with a legitimate case of conjunctivitis. It was pretty normal, truthfully, and the usual goop they prescribe to treat pink eye seemed to work like a charm. But, after a couple of weeks, I began to see things.

The doctor I saw – the one who examined my eyes and prescribed the goop – was a very short, very bald, very rotund man, with small, beetle-like eyes behind thick, wire-rimmed glasses. He was nice enough, and I didn’t feel uncomfortable during the exam. I knew what was wrong with me when I went in, so the diagnosis was unsurprising, and the prescription was what I expected. I followed directions, used the sticky goop as it was prescribed, and went about my business.

I got better. The itchy, red, dry eyes went away, replaced by clear, moist, normal eyes. I was glad of this. Pink eye is no fun.

And then I forgot about it.

But shortly after all this, however, I was sitting in a work meeting and happened to glance across the table at the guy sitting just opposite me. To my utter horror, his eyes were missing! Totally gone! Black, gaping holes where his eyes should be and blood dripping thickly down his cheeks! He acted as if he had no idea, moving his head as if he were actively watching the meeting participants and following their conversations. I squeezed my eyes shut, feeling my heart race and my stomach roll. But when I opened my eyes, the man across from me looked right at me and winked – with his perfectly normal, perfectly intact, clear, blue eyes.

We finished the meeting with no further incidents and I went back to my office, shaken and confused, but nothing more.

Over the next few weeks, this happened over and over again. I’d look at someone and see them with missing eyes, black empty sockets, and bloody cheeks, only to squeeze my own eyes closed, and, upon opening them again, find the person’s eyes exactly where they should be. And not only was it happening over and over, it started to happen with more frequency. The time between incidents (because that’s what I started to call the hallucinations: incidents) became shorter and shorter.

I went back to the doctor.

I expected to see the same short, fat, bald man I’d seen before, but this time, a tall blonde woman came in and introduced herself as Dr. Taylor. She wore a giant smile showing perfectly straight, white teeth. Her eyes were a dark, steely gray and she was as pleasant as can be. I explained the incidents, beginning with my last visit due to the pink eye, and ended with, “…and now, here I am again, trying to figure out what’s happening.”

At first, she just watched me with patience and interest, but when I was done, she looked alarmed and concerned.

“Who did you see the last time you were here?” she asked me.

“I’m sorry, I don’t remember his name,” I said apologetically. But I described him in detail.

She patted my knee and said, “Hang tight, I’ll be right back.” Then she rose gracefully and left the room.

A few minutes later, she returned; her face a complete mask. Behind her, entered another doctor. “Thank you for waiting. This is my colleague, Dr. Sample. I’ve asked him to sit in on this. You’re okay with that, right?”

While he stood, arms crossed, leaning against the back side of the door, she resumed her former seat. “So, let me just make sure I understand what you’re telling me,” she said. “You claim you were here on October tenth to have someone look at your eyes and treat them for pink eye, correct?”

“Yes,” I said, wondering why she used the word ‘claim’ in her question.

“Further, you claim the practitioner you saw was a short, fat, bald man with black eyes and wire-rimmed glasses, and that he prescribed you some ointment to treat pink eye, is this also correct?”

“And, you also claim that, in the time between your last visit, and this visit today, you’ve been having hallucinations of people with missing eyes, correct?”

“Well, I’m not sure what to tell you, Ms. Meyer. To start with, we have no record of your visit here on October tenth. Secondly, we do not employ a doctor fitting your description. And finally, we believe your hallucinations have nothing to do with your eyes, but rather, and most likely, it’s a neurological issue. We’d be happy to refer you to a neurologist, if you’d like.”

“But I was here,” I cried, confused. “I was here, and I saw the doctor and he gave me stuff for my eyes! Don’t you have video or something? Maybe you misplaced my records?”

“I’m sorry, Ms. Meyer. There’s nothing to be found. We have no record of your visit. Our security tapes are recycled every third day. Would you like a referral to see a neurologist?”

Dr. Sample, who’d until this time had been simply observing, said, “I’ll get that started, Dr. Taylor,” and silently exited the room.

Dr. Taylor looked at me, not with the sympathy I needed, but with disdain. I felt very small, and very confused. She did not say one word to me while we waited for Dr. Sample to return with the paperwork for the neurologist.

When he did, he handed me the packet saying, “Dr. Morrow is excellent and is expecting you tomorrow morning at eight o’clock. We’ve already made the appointment for you.” With that, both he and Dr. Taylor excused themselves and I was left to wonder if I was allowed to go.

I didn’t sleep much that night. The nightmare of my brother with missing eyes was back, but now, behind him, each person I’d seen with missing eyes in the past few weeks was appearing one-by-one. Each of them laughing like they were having the greatest time in the world. The laughter, along with the endless empty eye sockets, was more than I could take. I finally came fully awake at three o’clock in the morning, knowing I would not sleep again that night.

I’m not sure how to tell you about the next sequence of events, but ultimately, I have been admitted – involuntarily, mind you – to a psychiatric hospital. The neurologist found nothing either, of course. Unfortunately, after that visit, everyone I saw – every single person – was missing their eyes! I began raving. Not sleeping. Not eating. I became somewhat of a hermit, not wanting to leave my house for fear of seeing the eyeless people. I watched a lot of television, but then the people on television began to be eyeless, too!

Everywhere I went, everyone I saw had gaping holes in their heads and blood dripping down their cheeks! And they seemed happy about it! Going about their normal lives as if nothing was wrong!

One day, I risked leaving my apartment. I was acting crazy! I knew I was acting crazy! Maybe if I forced myself to face the fear, I’d overcome it, and everything would go back to normal. But when I got down to the street, I saw only eyeless people everywhere, going about their business.

I was frantic! My head whipped left and right. I tried to force myself to look – really look! Look past the horror to the truth! They had eyes, dammit! I knew they had to have eyes! But no matter how much I tried, I could not see past the hallucination.

“Miss,” he said, and his eyeless head turned in my direction, “Are you alright? Do you need help?”

“Where are your eyes!” I screamed at him, crying now. “Where are everyone’s eyes?”

I melted down, right there in front of a gathering crowd of people with no eyes. Staring, unseeing, at me as I wept, leaning against the concrete of a building. “Eyes! You all! All of you! You have no eyes! Why don’t you have eyes?”

What happened next is a blur. There was an ambulance, a couple of eyeless EMTs, and some thick leather restraints. The next thing I know, I’m waking up in St. Angela’s Psychiatric Hospital.

And all the nurses, patients, doctors, visitors, even the therapy animals – all without eyes.