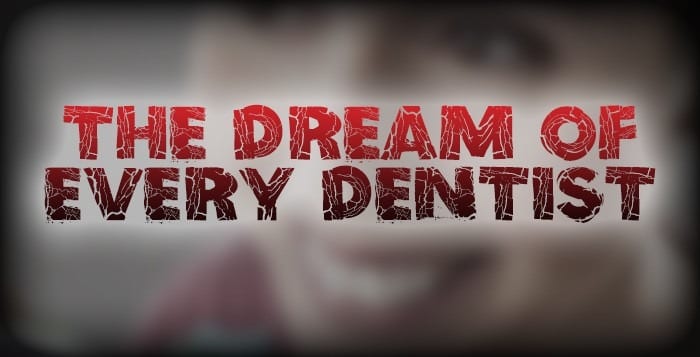 19 Sep The Dream of Every Dentist

"The Dream of Every Dentist"

“You are here,” said the man in the black suit, “because you are dentists.”

“Of all medical professions,” continued the man, “dentists have the highest rate of suicide.”

The men didn’t move. They kept their eyes locked on the man talking to them.

A few of the men fidgeted. One uncrossed his legs. They looked at one another. They looked sharply, squinty-eyed, questioningly at the man in the black suit.

The man in the black suit folded his arms and looked at each of them. He waited.

Finally, one of the dentists spoke. “You a dentist?”

“No,” said the man in the black suit.

“Then why should we talk to you? It won’t do any good.”

“You wouldn’t understand,” said another dentist, sitting up in his chair.

“You wouldn’t understand unless you’re a dentist,” said another.

“You can’t understand it,” corrected another dentist.

“And even if you could understand our dream,” said another, “You wouldn’t really understand it. Not really.”

The man in the black suit listened to them. He nodded as they spoke. The dentists looked at him with scrutiny. The man shuffled a bit and cleared his throat. “Like I said, I brought you here to talk about the dream.” He reached into his black suit and pulled out a bundle of envelopes. He opened one and showed it to the dentists in their seats. “Each of these envelopes contains $5000.00 cash. You each get an envelope if you’ll agree to tell me about the dream.”

“Why do you care?” asked a dentist. “Is that your money? You a pharmacist? You gonna give us a pill?” Some of the dentists snickered. “What’s in it for you? Why should we . . .”

“Regardless of my reasons,” interrupted the man in the black suit, “I have a lot of money for each one of you if you will tell me the dream.”

The dentists sat in silence. Then they spoke and said more or less the same thing.

“No, you couldn’t understand.”

The room fell silent again. The man stayed standing in front of the dentists as they sat, arms folded in front of him. Finally, one of them spoke.

“It won’t matter,” said another dentist. “He won’t get it. Nobody does, unless you’re a dentist. And he’s already told us, he’s not.”

“So what do we have to lose?” replied the other one. “I’ll tell him the dream, we’ll get our cash, and we’ll be on our way.”

Except for the few heads that nodded in agreement, the room stay still.

“Excuse me,” interrupted the man in the black suit, putting up his hand, “before you begin, I ask that this be recorded.” The man in the black suit clapped his hands twice, loudly. A door opened from the back corner of the room and an old woman entered, pushing some sort of typewriter on a chair with squeaky wheels.

“This is Ms. Crumb,” smiled the man as the woman approached. “She is a record keeper,” he said. “That,” said the man, pointing at the machine on the chair, “is a stenograph. Ms. Crumb will take notes.”

“Okay,” smiled the man in the black suit. “If you are all in agreement, let’s begin.”

The willing dentist stood up. He cleared his throat. “The dream has to do with the amount of holes in a person’s head,” he began.

One of the dentists sighed loudly as if he’d heard the story a thousand times. “He’s not going to understand,” he retorted.

“Let him try,” said another.

The first dentist continued. “Every person has seven holes in their head: two ear holes,” he said, putting his index fingers on his ears, “two eye holes, two nostrils, and a mouth,” he said. “Seven.”

Ms. Crumb started typing quietly away on her stenograph.

“It’s a horrible dream. Really,” he continued. “The dream deals with a type of weaving that goes in and out of these different holes. And it’s always the same.”

The dentist lifted his hand and put his thumb and forefinger together as if he were pinching something. “I am standing over a patient with a needle and a piece of thread. I have an overwhelming need to . . . to . . .” the man squinted up his face like he didn’t want to say the next part, but he did. “I have an overwhelming urge to weave that needle and that thread through those seven holes. I put the end of it in an ear, and it must come out of another hole . . . say, the mouth. Then it must go into another hole and out another and in another and out another until the last one.” The dentist paused. “Am I right so far, fellas?”

“You got it,” said another.

“And that’s a problem?” asked the man in the suit.

“It’s a huge problem,” continued the dentist. “There is something in the dream . . . uh, an aura, or uh . . . an entity, a compulsion—call it what you want—that mandates: What goes in . . . must come out. So there I am, bent over some man, sewing a thread through him like he’s a stuffed turkey.” He scrunched up his face again like he knew he’d said something distasteful.

“It’s hard to capture in words,” one of the other dentists interrupted. “But the dream is very clear and there is a very real sense of some sort of . . . urgency. I take that needle and that thread and I must go in through one of the holes in the head, and out through another. Until they’re all used. And every time,” he continued, gritting his teeth, “that dang needle ends up on the inside. So I pull it out and the patient is screaming and I start again and I’m up to my elbows in blood and . . .”

“You can imagine,” another dentist interrupted. “It’s horrific.”

“And of course, it makes perfect sense when we’re awake,” said another, “that the needle and thread will always end up on the inside of the skull, but we do it over and over and over because it’s a dream. Going in and out, in and out, in and out, and in. The patient screams and you gotta pull the needle and thread out and you’re up to your elbows in screaming and blood, and because it’s a dream you just start again. And again. And again . . . ”

“Then,” said another dentist, “we wake up after a full night of needling and threading and go to work and there is a patient in the chair and the only thing on our minds is that dream and after a while, it is pretty dang hard to determine what is a dream, and what isn’t.”

“It’s why we drill so hard sometimes,” said another. “We think, if I can drill another hole in that tooth, in that head, then maybe, just maybe, I can dream of a patient with another hole in the head, and maybe the needle will come out!”

“And maybe the dream will stop,” said another.

“And,” said another dentist resolutely, “it’s most definitely why some of us put a gun in our own mouths and pull the trigger.” He looked around the room. Nobody looked at him as he finished. “It’s a bad thing to say, but that hole in our own head is the only sure way to end the dream.”

The man in the black suit listened.

“Then we can sleep,” said one.

“That’s the story,” said one of the dentists. He looked at the man in the black suit. “We just want to sleep.”

At this point, the man in the black suit got up from his chair and approached Ms. Crumb who had been recording every word on the stenograph. He stood directly behind her so the two of them faced the semi-circle of dentists. He placed his hands on her shoulders. She stopped typing.

“I would like all of you to come forward and stand around Ms. Crumb,” said the man in the black suit. “Go ahead. Come forward.”

The dentists got up. They approached Ms. Crumb and the man in the black suit. He looked down onto the top of her head and said, “Ms. Crumb, I want you to show these people your unique . . . characteristic.”

Ms. Crumb slowly lifted her chin, and tilted her head back until she locked eyes with the man standing above her. He gently placed his hands around the bottom of her chin and snugly cradled the top of her head with his forearms into his stomach. The man in the black suit looked up at one of the dentists.

A dentist stepped closer and stared down at the old stenographer’s face. He gasped. “What is that?” he asked. He moved even closer until he was just a foot or so from Ms. Crumb’s face. He squinted and fumbled with his words: “How? . . . Why? . . . How is it done?” He lifted a pointing finger at the old woman’s face. “That is impossible!”

The man in the black suit looked up at the rest of the dentists, “Look closely,” he said, “all of you.”

Ms. Crumb remained in the man’s grip, staring up at the ceiling. As they came forward, she resumed her typing—recording the dentists as they came one by one until they had all witnessed for themselves the miracle of Ms. Crumb.

“It’s just a line,” said another, pointing with a pinky finger. “Just a fake line.”

“She has six holes in her head,” said another with a half smile.

The man in the black suit gently released Ms. Crumb from his grip, and she dutifully continued to record each statement, each observation, as the dentists walked around the chair, counting the holes in her ears, her eyes, her nostrils. Some counted the holes with their fingers. Others pinched their own imaginary needles—plunging and pulling imaginary threads into the air as they walked around her.

“She doesn’t have an extra hole,” said one. “She has one fewer! It makes sense!”

“Thank you,” they cried to the man in the suit.

“I am ready to hand out some envelopes,” said the man in the black suit, reaching into his suit coat, retrieving the bundles. “But first,” he said, pulling a needle and a long piece of black thread from his coat pocket, “Let’s make sure it works.”