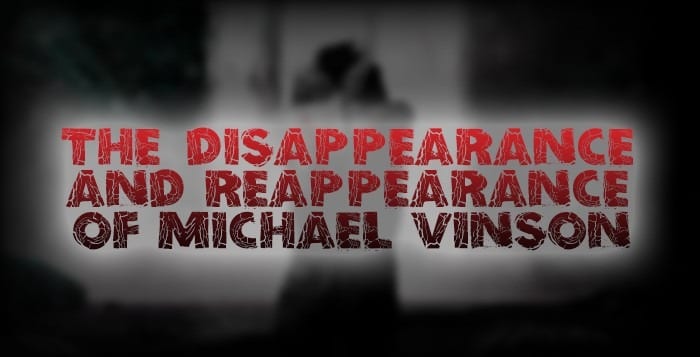 05 Oct The Disappearance and Reappearance of Michael Vinson

Posted at 23:00h in Strange and Unexplained by Creepypasta 8 Comments
Please wait...

"The Disappearance and Reappearance of Michael Vinson"

It’s been a month since Michael returned. He was gone for more than four years, and now he has finally come back. The only thing is, he isn’t the same anymore. I understand that, it’s been four years, of course he has changed. It’s in the way he changed that’s odd. He barely ever smiles anymore, only ever gives off the occasional hint of a smile, then it’s quickly suppressed and a blank, emotionless mask takes its place. Sometimes when we hang out, he would suddenly panic and start screaming and hitting himself in the chest and legs uncontrollably and that usually goes on for a couple of minutes at the very least.

Even though he still is my best friend, I’m afraid to be with him alone, for what he might do. I’m not necessarily afraid that he would try to hurt me, it’s that if he tries to hurt himself I don’t trust myself to be able to help him.

Michael has been on TV many times since returning. Every news station and talk show were all over him for the first couple of weeks, offering a lot of money for him to be on their show before he appeared on any other. His parents were very against the idea of him being paraded around on TV, but he ended up doing it anyway, being very adamant about the self-proclaimed “fact” that he needed to. While appearing on these talk shows he acted even stranger than he usually would. Sometimes he would simply ignore the hosts’ question and just stare at the audience with blank eyes, until the host eventually snapped him out of it by touching his shoulder or something of the sort.

People online defended this saying he had been mysteriously gone for four years, of course there were going to be some things he would have to get used to, the attention for one.

His parents were very supportive of him and whatever he felt like doing, but they were also very protective, understandably so. Every time he went somewhere decently far away, they came with. Personally I’m just glad that they never joined when he would come over to my place.

Now, I know what you’re wondering, where has he been for four years?

I’ve tried talking to Michael about it but it must have been incredibly traumatizing, because every time I try to ease into the subject he ends up freaking out and having a panic attack, or just getting oddly mad and leave. After a few attempts I decided that it would do no good for me to ask him about it, and I would just wait until he was ready to tell me, and even though I desperately wanted to know what had happened, it was okay if that never happened. I would leave that to his psychiatrist from now on.

One other thing about Michael’s behavioural changes since coming back is that he sometimes acts abnormally when we do something that he enjoys. I took him to the skating park just last week, since skating is something that he used to love, and he kept repeating with even intervals,

Maybe you don’t find that too strange, but the thing is, my name isn’t Thomas, its Isaac. I would correct him every time, and every time he would apologize and blame it on his brain being scrambled since he got on the meds the psychiatrist was giving him. Those must be some strong meds, I thought.

Even through all the odd behaviour and lost memories, I still see my best friend. He is still in there, and I will be there for him every day showing my support until he is fully healthy.

One day, I decided it could do him some good to go out, drink and just relax. Surprisingly, he agreed and asked me to pick him up at nine.

When I got to his house it was ten to nine and he was still getting ready, so I sat down in the kitchen with his mom as she was getting dinner ready. We talked about everything under the sun, and I eventually brought up Michaels odd behaviour at the skating park.

“What kind of meds does that psychiatrist give him, anyway? Don’t get me wrong, Michaels been acting out of sorts even before those but it seems even worse now, I mean he called me Thomas, repeatedly.”

Michael’s mother, Martha, gave me a look that told me she had no idea what I was talking about,

“What are you talking about Isaac? Michael hasn’t had any medication prescribed, the doctors told us that would more than likely escalate his strange behaviour, and it could also worsen his PTSD.” By the mention of that last word she lowered her gaze and looked incredibly sad for a split-second, but when she looked up again the sadness was gone and she acted like nothing had happened, then she went back to chopping vegetables for supper.

“I think it’s good that you are taking him out to have some fun, you’re a good friend Isaac, just remember to be careful.”

“I promise we’ll be as careful as we possibly can.” I said with a hint of sarcasm and Martha smiled genuinely.

I didn’t have any time to ponder what had just been said, before Michael came jogging down the stairs.

We said goodbye to Martha and got out to my car. That’s when it hit me. Michael hasn’t had any medication prescribed, that’s what his mother said. Either he lied to me or he lied to her, but why? I had to know.

“You know at the skate park, where you told me you were on about that whole Thomas thing because of the meds you were taking?”

I gave him a deeply concerned look and almost ran us off the road, so much for being careful, I thought.

“I don’t feel like talking about it.” He finally said. He looked distant.

Well, that was new, and strange, what just happened?

We soon arrived at the club, and the incident in the car was practically forgotten, any troubles could wait until tomorrow, or even longer for that matter. Tonight was about relaxing, taking a load off, and just having fun.

We walked up to the bar to do some shots first of all and then see where things went, we decided on tequila. We downed a few shots and generally had a good time, Michael seemed to loosen up a bit, when all of a sudden something felt wrong about him. He seemed way drunker than he should be, we had only done three shots so far. Michael was always quite the heavyweight when it came to drinking. When he spoke he slurred badly, his pupils twitched to the sides and up and down, it freaked me out. He looked like he was having a breakdown, much worse than any of the panic attacks he had experienced before. I grabbed his shoulder and gently shook it,

“Michael!” I had to scream to make myself audible, the club was deafening. “What’s happening, are you alright?” He didn’t respond, his twitching got worse and worse until he fell from the barstool down onto the floor, his whole body shaking violently, foam spurting from his mouth in waves, it seemed endless. Other people were now noticing what was happening, they helped me carry him outside and someone called the ambulance, I was so shocked I just stood there, looking at him, feeling completely helpless. What if he died? They couldn’t give my best friend back to me just to take him away a month later, that couldn’t happen!

As the ambulance drove away I stood still for a long time, must have been like thirty minutes, just watching the road it had driven off on. They didn’t let me come with them because they didn’t want any distractions or interferences, at the same time as that had pissed me off, I understood them.

I suddenly began sobbing uncontrollably and kicked a lone trash can into a wall as I screamed straight out into the night. An idea popped into my head as I stood there, devastated, and not a good one. Instead of going to the hospital to sit with my friend, or even informing his parents, which I was sure the hospital would do themselves anyway, I decided to head out to the forest where he had gone missing. What was I searching for, you might ask? Nothing, anything, answers to all the questions spinning in my head. What had happened to Michael out in those woods? Who, or what, had done this to him? Was there any way for things to go back to normal?

I asked myself that last thing over and over as I, in a rage, drove down to the woods. I parked my car between a river and the beginning of the forest, grabbed a, finally useful, flashlight from the glovebox and started walking. If Michael was a heavyweight when it came to drinking then I was a very light lightweight, and I was very tipsy from the few shots we had had. This made wandering through the woods alone at night more terrifying than I had anticipated. The wind howled and the leaves shook wildly in the trees.

“Just breathe, Isaac, in and out.” Somehow talking made the forest even more unnerving, and just as I spoke, I thought I could hear footsteps behind me. “There’s not a damn thing here.” I told myself in an attempt at mustering some courage, but I knew that was a lie. Something was here, something had taken Michael, something had broken him and it felt like that something was watching me right this moment. Footsteps again, or, no, not footsteps, dragging. Something was dragging against the ground close to me, that something was breathing heavily, wheezing in long ragged breaths. I spun around, shining the flashlight all around me, but I could see nothing. Another sound could be heard, right in front of me, a twig breaking. Something was coming towards me in the pitch black darkness, and it was moving slowly, very slowly.

A hoarse voice was calling my name, it sounded weak, dying. I slowly walked toward it and what I saw made my heart stop in my chest. It was Michael, lying on the ground, a bloody mess. Apart from the wounds, he looked almost identical to when I last had seen him, four years ago. I didn’t even know what to think, my head was spinning.

“It’s not real, y-you’re not real.” I finally blurted out.

He had lines drawn all over him, like someone had taken his measurements, taken his size. I don’t know why, but I believed what I saw, I believed he was real. Tears streaming down my face as I sat down beside him, I asked,

“If, if you’re real, then who is the Michael that came back?” I barely believed my own words as I spoke them, they gave me shivers to the bone. The Michael on the ground was trying to speak but he was too weak, instead, he rolled over. On his back there was a scar, right beside his spine. I breathed in sharply as I realised and collapsed in grief over Michael’s now dead body. That scar had been there ever since Michael was five, I know remembered that the Michael who returned, didn’t have one.