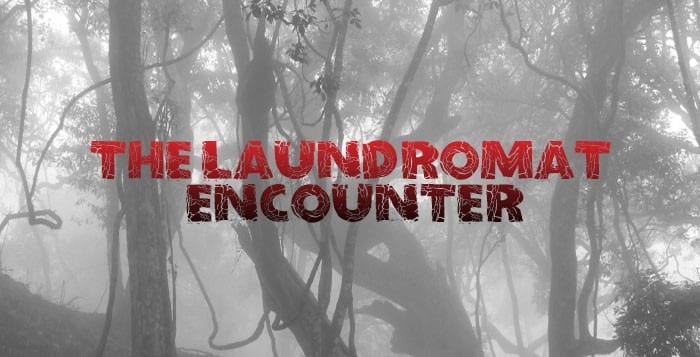 Posted at 19:55h in Beings and Entities by Creepypasta 11 Comments
Please wait...

I swear on my dead father, this is an honest-to-God real story. It happened when I was 13. I remember the night clearly: It was cold, and it chilled me to the bone, and I will never forget it.

I had run away again, and this time I was faced with spending a night at an apartment complex. I thought I was going to stay in my friend’s room, in one of the apartments in the compound, but that wasn’t the case. My friend’s family didn’t want me to stay with them that night (or maybe any night), so she suggested I sleep in their community Laundromat, which was open 24 hours and located in the center of the housing complex. I took the key she gave and made my way to the center.

The night was windy (definitely in the 30s), so I went into the one-room building as soon as the last apartment dweller had taken their clothes. With only a thin jacket on, I needed to be inside. It was empty and quiet, and I found a comfortable little nook between a dryer and a corner. I slumped down with my knees to my chin and looked around. It was snug; I could rest my head on either side, I had a view of the door, and I felt safe.

The silence was soothing, and I felt my eyelids grow heavy. I was exhausted from teenage angst, and from running away, but I felt relieved that I had found a comfortable refuge for the night. It was better than I had expected. Content, I closed my eyes.

A minute later, it began.

I heard a slight shuffle, followed by a sweeping sound, the kind a Chinese broom creates when it’s being swept across a hardwood floor.

A cold wind brushed against my left ear, and then the stench of garbage (the kind that’s been sitting in the sun) wrapped its stink around me. And the scariest thing happened next, the breathing.

It was short, tortured, but it was steady. It made my blood run cold and I was petrified. I knew something non-human was close to me.

My heart pounded loudly, and I sincerely thought it would explode at any moment. I had to do something. The stench had settled around my calves like a thick layer of rotting flesh. I had never been more terrified in my entire life, and it got worse.

It took all the strength I could muster to open my eyes, and even more unknown reserves of courage to shift my head to the left and peek out. I saw a wall, the same one that was sandwiching me next to the dryer.

And the room was silent, aside from the drone caused by the water system running through the washer and dryers, it was void of paranormal sounds and foul odors.  The room was completely empty. I was still in my spot, and I was still sane.

However, just before I was able to breathe a sigh of relief, it returned, and I thought I was going to die of fright at that very second. I looked around the room, frantic, my mind racing to find an explanation. Maybe my friend was playing a prank on me. Maybe the wind had carried some poor apartment dweller’s snoring party my way. But none of that was true and I knew it.

All the windows were closed and the air was still. The rustling of the leaves could be heard outside, and inside, the breathing next to my left ear became louder and more jagged. Suddenly, a surge of adrenaline raced through me and I jumped into action.

I made a mad dash through the laundry doors, past two apartment buildings, climbed to the second-floor staircase to some random building dweller, and stopped. I was panting, I had a cold sweat, and I was afraid beyond words. I could barely catch my breath, and then I felt the cold breathing next to my ear once again. My heart stopped. I didn’t know what else to do, so I ran across to the other side of the compound… and the entity followed.

I was thoroughly scared, so much so I fell onto the steps of the staircase I had been climbing, gathered myself into a sitting fetal position and did something I didn’t normally do. I started praying.

I prayed to God, Jesus, and the saints. I promised them my good deeds and repentance for all the bad I’d done… but as I kept on praying, the breathing stayed steady in my ear.

The night passed that way, with the praying and the breathing, until the first rays of sunshine sliced through the dark and dawn broke. The entity disappeared. The light saved me.

I felt the heavy weight of a possible possession lift, and I was able to run and escape the apartment complex entity, but it never really went away. Throughout my life I would feel its presence, and hear its faint breath next to me, every time I am alone.

It is there waiting to take my mind and my spirit, and I am so afraid.