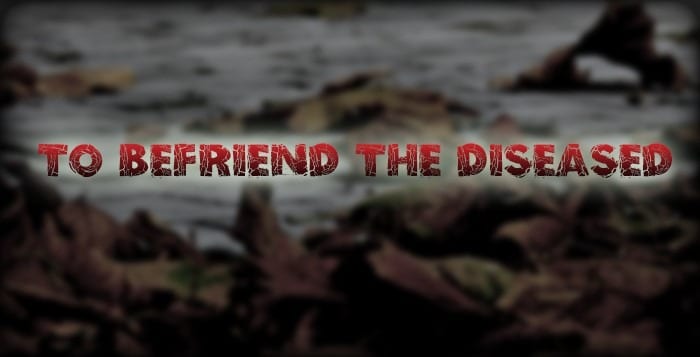 25 May To Befriend the Diseased

Posted at 23:59h in Deaths, Murders, and Disappearances by Creepypasta 10 Comments
Please wait...

"To Befriend the Diseased"

A silver grey car drove me by, allowing water from the newly formed puddle beside the sidewalk to splash up at me. This left my pants soaking wet and the side of my face splattered with murky rain water. Normally, I’d let out a load attention craving sigh, curse the driver or raise my middle finger, even though I knew they’d probably not care enough to notice. But this time I did none of it. I kept on walking, listening to the sound of the two inner sections of my pants rubbing against each other’s water drenched surface.

The streets were almost completely empty, except for an older man and a few teens running off to different locations. It made the raindrops tapping against the hard ground even more outstanding to me.. as I lowered my head. After about ten minutes of walking in the heavy rain, the strong sensation burning behind my eyelids made it too difficult to keep my eyes from watering. I felt tears run down my cheeks as I sobbed. There, before her bloom adorned grave, I stood. Accompanied by nothing but the crows lonely singing and what I hoped would be my best friend’s long since lost embrace.

My mom used to say we were inseparable as kids, not a day passed that we wouldn’t share with one another. She and I roamed the world in a constant search for adventure, two young souls with a hunger to swallow the world we adored, and knew oh so little about.

We first met on a beautiful summer day. I sat in a handcrafted swing in our backyard. My father had built it for me himself, since he’d always been quite handy and didn’t feel like spending money on things he could make on his own. I sat there, glancing up at the sky. It was like the secret work of an unidentified artist, their canvas covered in blue, spotted with just a few droplets of white paint.

Whilst swinging my small, pale legs back and fourth, allowing myself to go higher and higher, I was suddenly interrupted by a cheerful tone. “Hi!” I heard from behind my back. I turned around to see a young girl hanging over the wooden fence between us. “Hey!” I said happily, jumping off the swing. “Wanna go play in the woods? It’s no fun being out here on my own.” She looked at me for a second, then leaped over the fence, her eyes glowing with excitement. “I never thought you’d ask, come on!” She said and grabbed my arm. And with that me and Leona begun our very first adventure together.

Birds dressed in shimmering feathers sailed through the air, as the sea of grass and blooming flowers below them swayed in the warm breeze, which helped carrying them to their next destination. They softly allowed their songs to echo through the air, almost too eager for their peaceful melodies to attract a new partner.

Leona danced around the trees like a whirlwind, taking in every fascinating detail about our gorgeous surroundings. We stopped at several places to look at different insects and discuss their strange appearance, watched the birds fly high up in the sky and sang as we collected flowers in the fields.

As it got dark we both darted back down the streets to our homes, struggling to explain to our parents why we’d been out so late, but every second together was worth more than gold.

Every summer’s day was just the same. She’d knock on my door and I’d sprint out into the wild with my newfound friend, often leaving my half-eaten breakfast behind, causing my mom to yell at me in the distance as we ran. Our dresses and the trees surrounding us would blow in the wind in harmony. We’d laugh and do each other’s hair. We’d have snowball fights and build snowmen every winter. And once school started we sat together on the bus, discussing different subjects and drawing in our paint books.

With time though, Leona begun spending more and more time at home after school. I asked her why that was, why she couldn’t come out and play. But she’d only look down into the ground and bite her lower lip, as if she was trying to come up with a less complicated answer than the actual truth. She’d blame it on homework even though we had none, or that her dad was taking her somewhere though she’d never say where. After a few months I stopped questioning her strange behaviour, and instead I spent all the more time alone trying to find something that could make up for the loss of my friend.

I sat in the forest one day later that same year, watching the colourful leaves fall to the ground all around me. I grabbed a handful of them and tried talking to them for a while, but it didn’t take long for the cold wind to rip them all out of my grasp. Leaving me alone on the icy ground. I sobbed uncontrollably, thinking of my old friend. Of the times we’d spent on that exact spot. The topics we’d discussed.. and all the things we’d drawn and sung.

For just a second I was overcome with terror as I realised the sensation, I was being watched. I turned around to face whoever was staring holes into the back of my head, and saw.. a young boy. I waved at him to come play and he started talking to me as if we’d known each other for years. It was amazing to finally have found someone to play with.

We wandered through the slowly decaying forest, taking care not to disturb any nearby animals. It was beautiful, each tree decorated in the colours of autumn. After a few minutes the young boy suddenly stopped and stared straight at me. I looked back at him and asked what was wrong.. No response.

Almost as if in slow motion his face begun to melt before me as all light disappeared into shadow. I parted my lips to let out a scream of horror, but soon noticed no sound whatsoever could be heard. I checked my surroundings and watched as faces formed within the bark of each tree, smiling and crawling around like insects. I screamed and cried as I hit the deformed creature repeatedly with a large rock. The sound of it’s bones cracking became louder and more disturbing with each hit, and it’s shrieks and laughs more difficult to withstand. I wanted nothing more but to recoil in horror.

I could feel my heart race with terror as I desperately tried to keep on slamming the rock into its face. My arm went almost limp as I sobbed, asking myself what the hell I was doing.

Before I knew it I could see the tender pinkish meat around the figure’s empty eye sockets. How the rock repeatedly dug deep into its skin and ripped each moist, bloody piece from its very bones which I was making a vigorous effort to crush to pieces. For a minute or two I stopped and stared into its eyes, as if peering into its very soul.

It placed its hand on my cold, sweaty cheek as its body begun to melt back into what used to be my beloved Leona. I gasped at the sight of my mangled friend and tried over and over to rip her back into consciousness, but it was hopeless. I stared at the rock in my hands and threw it away in horror. This last moment with Leona shattered my whole world for the rest of my entire life.

I never knew schizophrenia was running in the family.