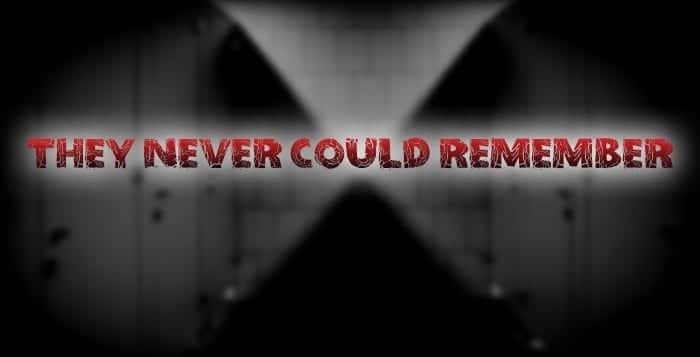 14 Jun They Never Could Remember

Posted at 00:01h in Strange and Unexplained by Creepypasta 7 Comments
Please wait...

"They Never Could Remember"

The girls’ bathroom is haunted.

That sentence was the sentence that tortured him. Not because it was true. But because every goddamn day of his life, that exact same string of words were thrown in his face at a high velocity by shrieking, sobbing, ecstatic in anything-but-serious childish fear, hyper-ventilating, off-the-wall first graders, starting right after the announcements every morning at nine o’clock sharp.
This was his life. Originally, he had liked his job. Adored it, actually; he loved working with the kids, no matter how annoying they got and what decibel their piercing voices could reach on a daily basis.

Eventually, though, his joy for his chosen profession began to dwindle, until it reduced to an all-time disdain. He constantly pondered alternative career options, going back to school, starting his own business, anything to escape this. But her knew he never would. As much as he secretly resented them, he did love his young students, and besides, it’s not like he had the money from an elementary teacher’s salary to survive for two minutes without a consistently paying job.

He had no kids of his own. An extraordinarily average, middle-class, white man, his only noticeable differences in appearance were that he was unusually tall and thin, but remarkably young looking for his age, which was 43. Personality-wise, he was also astoundingly un-out of the ordinary. He hated his job, he despised most of his fellow humans, specifically his coworkers. He had reached the point in his life where the trivial things that mattered so much when he was younger meant little to him. The only thing he cared about was money and getting through the week without losing his sanity in front of the hordes of children – who he loved – that plagued his every waking moment.

The only thing remarkable about this man was the way he died.

Like everything else about him, the day of his death was exceedingly normal. He woke up at 7, drove the car he had had in his possession for almost six years by that time to the center of town, turned on the radio to the same station as always, discovered that his favorite drive-through coffee shop was closed. He then proceeded to turn the car around and head for the gas station, tell himself that although the coffee there may be disgusting and hint vaguely that it had been existent since the 80’s. A speeding convertible cut him off at the intersection, he swore profusely although he didn’t necessarily care that much, arrived at the gas station, bought said horrific coffee for 99 cents plus tax, and was on his way to the elementary school in the next town over.
Once there, he was bombarded with small children, asking hundreds of questions an hour, complaining about the behavior of the other kids, cries for help after getting hurt despite their teacher’s attempts to watch their every move, and, of course, the pleas for him to make sure that the girls’ bathroom was safe to enter as it surely contained a ghost or monster or demon or mass murderer, and so on and so forth. Typical childhood tomfoolery.

It took him the standard fifteen minutes before school officially started to calm everyone down, and he thus began the day’s lesson.

Everything went swimmingly until recess. The kids impatiently hopped in a single file line, infuriated at their teacher’s leisurely strolling pace, until they scattered once they hit the playground. A group of girls asked to go to the bathroom, our main character granted them his permission, and then sat at the base of the stairs leading down from the main entrance to supervise the energetic cluster of children.

He had learned at an early point in his vocation that no amount or quality of surveillance of overactive elementary schoolers could prevent catastrophe of any sort. He wound up walking a teary-eyed five year-old (a kindergartner, not even from his class) to the nurse’s office, and it was then did he witness the group of three girls from his class, who had previously excused themselves to the bathroom, sprint down the hall.

They begged him to check the bathroom, he refused, insisting that; first of all, he wasn’t allowed in the girl’s bathroom, and second, there was nothing to be afraid of, it was just their imagination.

They weren’t buying it.

The girls followed him out the door back to the playground while the relentlessly repeated their pleading, until he finally asked Mrs. Katkocin – a woman about his age but with far more energy than he – to investigate. The two believed, obviously, like any good adult grown out of the land of fantasies, that there would, in fact, be absolutely nothing in the bathroom.
So off she went. At first she played along with the girls, pretending that they were going to go battle some fearsome monster, lifting the spirits of the girls as best she could. And all was well until all four sprinted out of the bathroom in a panic.

The kids were ushered back into their respective classrooms, while our main character and Mrs. Katkocin discussed the events just seen.

All the kids had been dismissed. The majority of teachers had left. Those who were still in school were the custodians, those who worked in the main office, and the teachers and students involved in after school activities. Our main character was one of the sort; the Girl Scouts has asked to use his room, and he had given them his permission, but it was mandatory that he remained in the room for the duration of the meeting.

He sat there and graded papers on autopilot as usual, until he noticed something peculiar. The troop leader, a woman of about 30 years, asked a little girl to check on another named Emily who had gone off to the bathroom and never came back.

The girl stalked off, bothered to be pried away from her friends. She was gone for nearly five minutes before the woman became nervous again.
She was about to head to the girls’ bathroom to find them when the the first one – her name was Karen – went running by the door before passing out halfway down the hallway.
The woman sternly instructed the girls to stay in the classroom, while she went to the help Karen, who was now bleeding from the fall. Our main character, shocked as could be, waited for the woman and the girl to get back into the class before leaving them and going to see what was the matter.

While he was away, the girls inside the classroom had resumed a calm state, or as calm as a group of children could be. Down the hall and to the left was the girl’s bathroom, where high-pitched shrieking could be heard at a continuous rate. In terror, memories are easily forgotten, but quick to reappear when needed the least. Before he could enter, his mind suddenly flashed to the images he had imagined while listening to Mrs. Katkocin earlier.

He paused at the entrance. You’d think, and he certainly always thought, that in moments that required bravery, he would come through. And this expectation, really, was the only thing that forced him into the girls’ bathroom in the heroic act of attempting to save a child from God-knows-what. What a hero. How amazing.
He took two steps and then fainted.

Emily, Karen, the woman, the other girls, and all those left in the building were distant, practically nonexistent to him. He woke up slowly, and contrary to his better judgement, he did not feel afraid.

As his consciousness grew, so did fear, until it became something inexplicable, something absolutely indescribable. Nothing he could have ever dreamt. And there was nothing there.
Nothing at all.

And it suddenly hit him how brave those children must’ve been. To stand within this. He didn’t scream, but only because he was far too…too…afraid was not the word.
Don’t make any noise.

And it suddenly hit him, another thing, how much courage it took to scream.

He stood. He looked at the ground, at where he had been laying. He saw the smattering of blood from where he had fallen, just like the kid, and he suddenly felt embarrassed. Something beyond fear and something beyond calm allowed for emotions to be played over others.

Don’t look in the mirror.

It was only rational. Don’t look in the mirror? Of course. Why would I? I’m sitting in the middle of a quite possibly haunted-as-hell… where was he?

Lazily, he lifted his head to face the full-length mirror across from him.

Where did the kids go? Why were they scared? Why did he fall? Why was his head cut and bleeding? Who was the girl on the ceiling?

The kids left the building sobbing. The Girl Scout leader had to go to therapy for the next ten years. The school was shut down. The teachers and school workers were laid off, quit, paid for their mental trauma, and found jobs elsewhere. Most had post-traumatic stress. Most had depression. Most woke up screaming in the middle of the night.

Our main character’s name was Adam Lennox. He was confirmed dead seven years after he went missing.

And no one could figure out where he went, or what had happened to him. Not the police, not the forensic scientists. Not even the witnesses. They never could remember.

And they never could remember who was the girl on the ceiling.