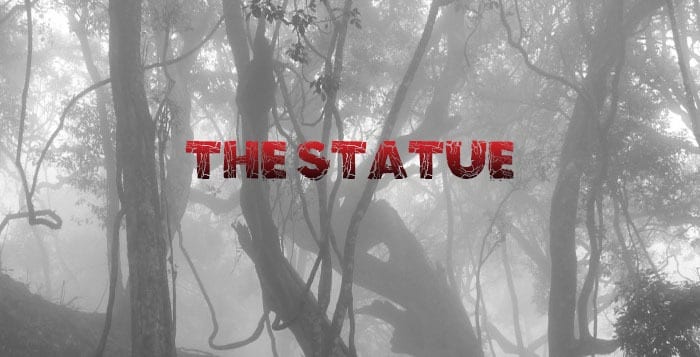 Posted at 16:59h in Artifacts and Objects by Creepypasta.com 8 Comments
Please wait...

The dealer was effusive in his praise for the artwork. It was just so life-like, he gushed. It wouldn’t be cheap, he admitted, but it was well worth every penny the artist was asking for it.

I knew the drill. Let the dealer do the talking. Don’t ask about the price until you’ve seen the piece.

Don led me down the gallery, his stubby legs practically dancing with excitement. He was very bad at hiding his emotions when he smelt a potential sale in the offing. I’d asked him to join me and my poker buddies for our weekly game countless times, but he’d always politely declined. Perhaps I needed to work on my poker face as well.

With a flourish befitting a maestro, he flung aside the cloth covering.

I almost gasped. It was a masterpiece. A sculpture of a woman caught mid-scream, her features twisted in some unknowable agony. Hands clawing at her face as she looked skyward for the help that never came. Exquisite.

It turned out that the price wasn’t that steep after all. A common trick used by salesmen, as I found out later. Make the customer think it’s going to cost a bomb, and when he’s pleasantly surprised that it isn’t going to burn such a big hole in his pocket after all, he’s more likely to be willing to part with his money.

But I would have paid more, if that’s what it’d have taken to have that plaster lady grace the corner of the living room, just beside the telly. Vera would never again be able to watch her silly rom-coms in peace. As expected, she kicked up a big fuss when the movers hefted the life-size statue into place. But I would have none of it, and my smart, lovely girl, knowing which side her bread was buttered on, wisely let the matter slide after letting loose one last plaintive whine about how it even smelt funny.

The guests couldn’t stop talking about it though, much to my delight. And I was happy to give full credit to the wailing woman for my handsome winnings from poker night too. Poor old Bobby swore he folded his pocket Aces to my Kings only because he thought he saw the statue blink. That fateful night birthed the tradition of “Cup for Luck”, which saw my rather vulgar friends cupping their hands round a certain part of the lady’s anatomy in order to invite luck into their hands. I didn’t approve, of course, but it wasn’t like the statue was going to be worse for wear.

Anyway, to my surprise, Don finally agreed to come down for one of our games one night. He had heard from me how well his golden girl was being received by all who saw her, and I thought he was probably going to try to take the chance to pull in a few potential clients, even if it meant losing a few hundred bucks to the sharks awaiting him at the table.

He whistled when he saw the statue, illuminated by a small set of spotlights I had purchased just for the sculpture.

“I swear, Dave, it looks even more realistic than when I last saw it.”

I rolled my eyes. “Save the pitch, buddy. I’ve already bought it.”

“I know, I know.” He looked forlorn. “Well, I did tell him that he could have asked for higher.”

He soon cheered up though, as soon as he was seated at the table. For once, it seemed that no one was even interested in the game.

“Who the hell is this artist, man?”

“Do you have any of his other works?”

Revelling in the attention, Don detailed the provenance of the art piece. Ignoring the romantic embellishments the inveterate salesman couldn’t resist adding, the background seemed a rather unexciting one. The artist was one he had worked with from time to time, but never had he produced such an inspired work.

Don’s pudgy face fell as the rowdy bunch grew bored of the story and returned to Texas Hold’em. He remained sullen throughout, folding most hands and constantly looking at his watch. The others just got more boisterous as the night progressed, as was the usual case. Poker nights at my place always include an open bar.

Almost inevitably, tempers eventually flared. I have to admit that part of the reason I keep my friends so well hydrated is because I can never resist a little bit of drama, even if it means that some of my friends end the night with a new bruise or two, or more rarely, a few missing teeth. But that night, I got way more than I bargained for.

It all began when Trevor and Bobby both showed the Ace of Spades. It was probably just two decks mixed up—after all, half-drunk men are hardly the most careful—but Trevor had lost a couple of hundred bucks just a few rounds back thanks to Bobby’s rather unexpected full house, so you can sort of guess what happened next.

The two men were on the floor before I knew it, drunkenly grappling with each other as the chips and cards from the upset table rained down on us all like some surreal snow storm. It was only when the two human rolling pins suddenly tumbled dangerously close to my precious new statue that I had the sense to react.

It was far too late.

A half-choked wail of despair escaped my throat as the woman’s head met the marble floor with an almighty crash and broke off from the body. I was ready to strangle the two clumsy cretins with my bare hands, but all thoughts of vengeance evaporated when the stench hit me.

It was an odour so putrid that the mere whiff of it was enough to expunge the contents of my stomach to the back of my throat. Worst of all was the pool of gunk that was fast spreading from the broken pieces of plaster.

Trevor gave a terrified scream and, like a crazed crab, scrambled on all fours to back away from the dark liquid. Bobby took one look and promptly emptied the contents of his stomach on the floor.

Dazed, I could only stare dumbly at the jagged white protrusion from the head of the statue as the screams around me numbed my ears.

The rest of the night was a blur. Someone called the police. Someone even called for an ambulance, can you believe that? I hope it wasn’t me.

I spent the night holed up in some hotel as the crime scene investigators swarmed all over my beautiful apartment to gather every last fragment of the unfortunate plaster-encased woman.

I never found out her name. All I know is that she was the ex-wife of the murderous sculptor. The one mercy that has been providing me some solace—the post-mortem showed that she was almost certainly dead when the psycho coated her with wet plaster.

Anyway. A word to the wise. Don’t ever buy anything from the gallery known as Don’s Art Library.