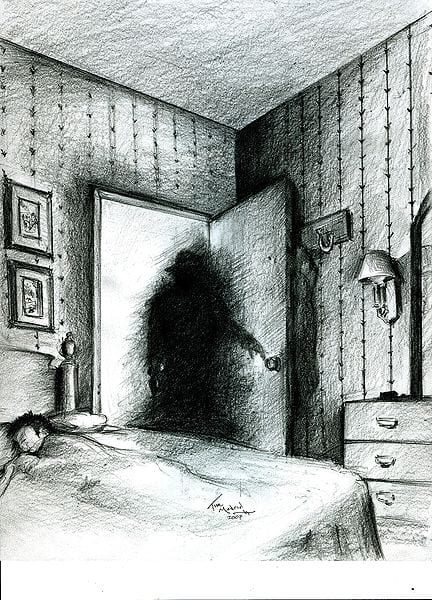 22 Dec The Shadow in the Doorway

Posted at 00:00h in Based on True Events, Beings and Entities by Creepypasta.com 14 Comments
Please wait...

"The Shadow in the Doorway"

I love myths, urban legends, paranormal stories and chronicles of unexplainable mysteries and phenomena. As a kid, I actively sought books and articles on the topic, no matter how vaguely related. 20 years on, I still enjoy delving into the stories of the unknown. The difference being, 20 years ago I didn’t have access to the wonderful world wide web. These days, I literally have a world full of myths, legends and stories at my fingertips and so, I often indulge in long Googling sessions, dedicated to absorbing as much information as i can. I am intrigued by the unknown; it means that there are things yet to be discovered and mysteries to be solved.

It was during one of my many mystery binges, i came across the story of the Hat Man – a form of Shadow Person. I stumbled across the legend of the Shadow People completely by accident, clicking through random links on Wikipedia. But it was the related article about the Hat Man which piqued my interest greatly. It roused a long dormant memory from within the depths of my mind. The following is an account of my encounter with what I now believe to be the Hat Man.

I don’t recall how old I was – around 4 or 5 – but it must’ve been quite late at night. My parents had retired for the night and the house was completely dark. The only source of light was the gentle wash of moonlight filtering through the thin curtains into my room. I was lying on the top bunk of the bunk bed my dad had made for us; the bottom bunk was occupied by my younger sister, who had been sleeping soundly for hours. It was nearly Christmas and I was laying awake, pondering the complexities of the world – something that has become a bit of a habit over the years. Although, it was likely the huge intricacies I was trying to figure out in my mind had something to do with how long it was until Christmas, on that particular night.

As I was staring at the ceiling, completely emerged in my own thoughts, I suddenly became aware of a feeling spreading through my body. A chill went up the back of my neck, making my hairs stand on end. If I had been close to falling asleep, I was wide awake now. I held my breath and laid stone still, straining to hear something which would give me a clue as to what it was that had put me on edge so suddenly. I heard nothing, other than my sister’s rhythmic deep breathing from the bed below. When I could hold my breath no longer, I let it go as quietly as I possibly could. I couldn’t hear anything out of the ordinary, so, after a few more minutes of laying as still as possible, I decided to roll onto my side, so I could see out of the bedroom door, into the hallway. I did this in such a way that it would seem, to anybody looking in on me, as though I was rolling over in my sleep; just in case one of my parents came in and gave me an earful for not being asleep, as I was supposed to be.

As I completed my expert manoeuvre, I heard a noise in the hallway. It sounded like footsteps, which was a relief – it was just my dad, checking on something in the house. But, as the footsteps drew nearer to my bedroom door, a wave of unease washed over me again. My dad was always very careful about being as quiet as possible, when walking around after lights out, so as not to wake anyone. Listening to this particular set of footsteps, I wondered if perhaps this was my mum, as the perpetrator seemed to be making no attempts to mask their sounds.

I pondered this curiosity, as a figure emerged from the hallway and came to a stop in the doorway of my bedroom. Once again, I found myself holding my breath, trying to be as still as possible. The figure stood in the doorway, breathing quite loudly. It was definitely a man, judging by the sound of the breathing. For a few moments, I relaxed, thinking that it was my dad after all. I started breathing again and closed my eyes, pretending to be asleep. But the sound of the breathing stayed in the doorway. I opened my eyes again and took in the image before me. My blood ran cold. My dad did not habitually linger in doorways. Also, my dad was nowhere near as tall as the door frame, nor did he wear – or even own – a wide brimmed hat. I stayed as still as I could, hoping that the figure could not see that I was awake. With that monologue running through my mind, I was reminded of the line from the Christmas carol, “He sees you when you’re sleeping, he knows when you’re awake.” I smiled to myself – the figure in the doorway was Santa Claus and he was waiting for me to fall asleep! Of course! It made sense, being so close to Christmas.

I closed my eyes once more, ready to fall asleep. Once more, I got that feeling of unease. The hairs on my neck stood on end, once again. Something was not quite fitting about that conclusion. Santa doesn’t wear a wide brimmed hat. Also, I was fairly certain that he is never depicted as tall and broad shouldered. The figure in the doorway definitely did not look – or feel – very Santa-ish at all. My eyes shot open again. I needed to figure out who was standing in the doorway. Even with the light filtering in through the curtains, I could not make out any details of the figure. My eyes had adjusted fairly well to the darkness by now and i could make out just about everything around this figure. But whoever was standing in the doorway may as well have been a shadow. The only thing that told me that this was not a shadow, was the heavy breathing accompanying the figure. Just as I felt that I could not lay still any longer, the shadowy figure took one last deep breath and receded from the doorway, seeming to melt away into nothingness.

By this stage, a lot of kids would probably have cried out for their parents or, at the very least, thrown their covers over their heads. I did neither of those things. Instead, I laid there, pondering my new mystery of the night, Christmas forgotten, until I fell asleep. I remember asking both of my parents, the next day, whether they’d spent any time looking in on my sister and me the night before. They assured me, every time that I probed them about it, that they had not been anywhere near my bedroom the previous night. I guess, after a while, I just sort of shrugged it off. It didn’t happen again at all. Every now and then, the memory would spring to mind, especially during my night time ponderings. However, I thought about it less and less as time went on and, until I saw the picture accompanying the Wikipedia article on the Hat Man, I’d almost forgotten it completely. To this day, I have no idea what it was – whether it was one of my parents sleepwalking, somebody who wasn’t meant to be in the house, a supernatural being or otherwise – but the picture of the Hat Man is almost exactly what I remember in my doorway.

based on a true story, based on true events