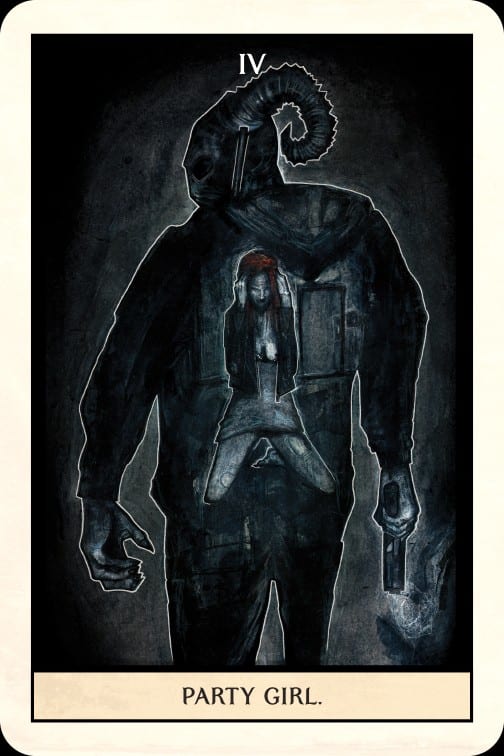 Posted at 12:00h in Deaths, Murders, and Disappearances by Creepypasta.com 4 Comments
Please wait... 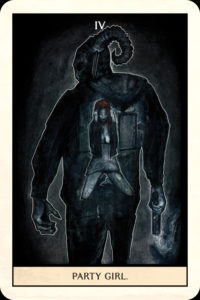 The door slams behind Monica as she stumbles into the hallway of an apartment complex, mascara streaming down her face.

“Asshole,” she says. The word hisses out between her clenched teeth.

Fiona steps out of the apartment. Through the open door, Monica hears a snatch of conversation.

“What’s up with your friend?” the drummer asks.

“I don’t know. PMS?” Katie says. They laugh. Katie, Becca, and Serena laugh like they weren’t her best friends only minutes ago. They laugh to look cool in front of Adrian’s band. Smoking cigarettes and drinking booze she bought them, wearing the expensive clothes and jewelry she loaned them.

Fiona shuts the door behind her. “They’re jerks,” she says. “Forget about them.”

“I can’t believe Casey would do that to me. She knows I like Adrian. Stupid whore.”

“She probably got caught up in the moment and didn’t know how to turn him down,” Fiona says. But Monica isn’t interested in sympathizing. She wants to rush back into the apartment, bust down the door to Adrian’s room, claw at Casey’s face, drag her out of the building naked, and let the bums have their way with her.

“Come on, let’s get out of here,” Fiona says, guiding her down the hallway, past graffiti, heels catching on the stained, threadbare carpet. They lean against each other for support, walking in a jagged line.

Monica curses that last drink. Her brain is ice in a blender–gray matter spinning and pulverizing against the spiny blades at the base of her head. The flickering, murky lighting isn’t helping. Beside her, Fiona takes deep, steadying breaths. She doesn’t look so hot either.

Just beneath the sizzle of dying bulbs overhead, a buzzing nags at her ear. Only when they’ve reached the bottom floor does Monica realize the sound is coming from her purse.

“Shit! It’s my dad,” she says, fiddling with a crystal-studded phone.

“Are you crazy? Don’t answer that! We’re screwed if he finds out where we are.”

“I’ll just text him. I’ll say I don’t want to answer because I’m on the can.”

“No. My parents are out of town at PR seminars. As usual. It’s fine–he was just checking up on me.”

The frozen air hits them at the same time as they lurch out the door and onto the street.

“It’s because of the San Gabriel Stalker,” Monica snorts. “Dad thinks anything that gets publicity is worth caring about.”

The San Gabriel Stalker was the big word on campus at Lakewood Prep. Everyone tittered endlessly about the serial killer, excited by the sudden media frenzy that had burst their manicured, suburban bubble. Monica had tried to keep the news out of her house, but her dad didn’t just have a finger to the media’s pulse, he tapped into that vein like a junkie. Just as she’d expected, a sudden outburst of fatherly protectiveness almost convinced him to cancel his business trip.

Monica’s patience for a few nights to herself, her friends, boys, booze (and anything else she could get her hands on) had run dry. She convinced the old patriarch that he was worrying over nothing. Her mom helped out with a reminder that he was supposed to be making important connections at the conference in New York while she worked the conference in Los Angeles.

Monica breathed a sigh of relief when they were whisked away by matching Bentleys. Costumed kid-killers were the least of her concerns. She only had a couple of hours to get ready, and she still had to find an older man in desperate need of attention from a young girl–in other words, any old man–to buy her alcohol. Anyway, the guy had only knocked off a handful of girls from the Christian academy on San Gabriel. Nobody she, or anyone in her circle, knew.

But out on the dim city street in front of Adrian’s apartment complex–police sirens screaming in the distance, trash clogging the gutters–a visual of the killer processes like a Polaroid in Monica’s imagination. They should find the car and get home. Screw the other girls. If they don’t have money for a taxi, it’s their own damned fault.

The girls huddle closer as they walk down the street. They should’ve brought jackets and a change of shoes, Monica thinks as their sky-high heels smack against the pavement. They’re loud against a charcoal backdrop of grungy buildings and streets. Their colorful party dresses snap at a chilling breeze as they hurry along. Monica tries to soften her step, but her legs are so heavy even balancing is tricky.

The streets are empty except for a few drifters rubbing the cold night off their hands over garbage fires. They stare at the two stumbling girls on the opposite sidewalk. Monica doesn’t make eye contact. Fiona’s heart beats faster against her arm.

The girls speed up, but they keep tripping over their own feet and Monica is having a hard time catching her breath. Her stomach pitches.

“I don’t know. Is this where we parked?”

Fiona is blubbering so Monica tries to be the calm one. She ignores the churning in her stomach and looks around, still walking as fast as she can, certain she can feel someone’s breath on her neck, the heat of an outstretched hand. There’s a door on the side of a building only a few steps away. They can bang on the apartment doors until someone lets them in. Monica can call a cab and be in her pajamas watching Cheers reruns before midnight. Maybe she’ll make herself a hot cocoa to chase all memory of this night.

“Come on. In there,” she says to Fiona. They break into a tangled almost-run through the door and tear up the steps as someone shouts behind them.

The girls scream and keep running, not wanting to look back. But the stairwell ends at another door. Monica twists the knob. It doesn’t give. She pulls at it with what strength she can muster, but no luck. Fiona joins her, fingers scrabbling at Monica’s.

Monica and Fiona hug each other and flinch as an old homeless man joins them on the platform, dropping to his knees.

“I know who you are,” he shouts. “You have come to bring about the end times. I beg of you: save my soul. Let me stand beside God’s throne and pray for humanity boiling in torment below. Save my soul!”

Their shoulders drop. A broken fever pushes small beads of sweat to the surface of Monica’s skin. She leans against the door and lets relief wash over her.

“You scared us half to death,” Fiona shouts at the old man. Monica turns to her friend. Fiona looks like crap. What the hell was in those drinks?

“Holy shit, Fiona. I think we’ve been roofied,” she slurs.

Something like cannon fire rocks the stairwell. A moist explosion sprays across Monica’s face. The homeless man face-plants with a wet thud. Fiona’s shrieks echo in Monica’s ears. Another man stands at the foot of the steps, holding a gun. A black latex mask with rough holes for the mouth and eyes hides his face. A pair of plastic Halloween demon horns crowns his head.
Monica drops to the floor. Fiona is still shrieking when the masked man reaches the platform and grabs her by the dress straps. He wheels her around, but Fiona struggles and manages to free herself. Her heels scrape against the granite floor as she shuffles backward, putting a hand out to push the man away. Monica sees it coming before Fiona does. One of Fiona’s heels latches onto the ledge of a step. She rests all of her weight on the back of that foot to lean away from the man. She reaches out again and pushes off on his chest. Fiona’s body and the stairs are at an angle. It becomes more acute with each slowly-passing fraction of a second.

Fiona locks eyes with Monica who bears witness to the full evolution of her friend’s realization before she hurtles headlong down the stairs. Monica hears a crunch and a groan the first time the body hits the steps. She presses her palms against her ears for the rest.

While her eyes are closed, as she feels the wind knocked out of her, Monica tries to force sense out of the moment. She reels back in time to protect herself from the ugly, immediate future and stops on a memory.

Standing on the corner of Evergreen and Carol Street, Adrian had asked her to come over that night. He wanted her to hear the band, tell him what she thought. Monica had been waiting for this moment. He wanted her. She knew it. He’d been hesitant about getting close to a high school girl, but she was a senior and freshly eighteen. She agreed to stop by; he told her to bring her girlfriends along.

Monica walked home in a heat, fretting over what to wear, wondering how the night would go. Imagining her first time. The other girls thought she was a pro, but she always chickened out at the last minute. It would be different with Adrian. She’d let him.

Wandering down Evergreen, past San Gabriel and flocks of girls with gold crosses hanging from their necks, Monica clutched her books to her chest and daydreamed.

Monica looks up at the killer. He saw her then, mingling with the academy students, clutching her books like a naïve schoolgirl. He thinks she’s one of them.

A sharp, warm sensation floods Monica’s chest. She gasps, surprised, but instead of air, she’s taking in water. She coughs up. Monica’s eyes bulge as she stares at the splattered blood. More sputters out of her throat as spasms rip through her ribcage. Her arms give out and she meets the freezing floor. Monica’s head rolls to face the ceiling, to look up at the San Gabriel Stalker. But she can only see dark shadows swimming above her head, and pale light reflected off a blade raised high like a sickle moon.

Credit To – This is a “Final Hours” vignette excerpted from dark graphic novel Beatrice is Dead, a coming of age story set in the afterlife, written by S. Zainab Williams and illustrated by Robert Burrows.