On November 24, 2005, there was a disturbing occurrence at Disneyland.

It was an average day at the wonder-filled amusement park. Families were scattered throughout the park, the excited squeals of children rang out over the crowds, and Disney mascots wandered around and posed for pictures. Suddenly the magic of Disneyland was shattered as a frantic call ran out over the crowd.

A mother was running around Main Street, calling out her son’s name. Other mothers pulled their children closer to them as the woman ran around, her voice quickly growing from panic to horrible desperation. Tears began to roll down her face. Park security showed up and looked around, an announcement was made over the intercom to look for James with a description of what he was wearing.

The boy wasn’t found and nobody volunteered any information. It was only a few hours later that something else happened.

The same horrible scenario all over again. A mother ran around shouting for her son and asking people if they had seen him. She ran around with the boy’s father chasing after her, begging her to calm down and trying to reassure her by telling her that they would find him. Another announcement was made about Ronnie. Nobody came forward with any information.

After two kids had gone missing on the same day, something had to be done. Security in the park was tightened, placing security guards near almost every attraction in the park. Footage from surveillance cameras was reviewed, but nothing more than people buying sunglasses or Mickey Mouse walking with a few kids was seen. There was one security guard who reported that one kid had told him that he had seen Ronnie.

The guard said he was standing outside of one of the rides when a little boy walked up to him. The boy looked to be no more than six or seven years old.

“I know what happened to that boy…” he told the guard.

“You do?” The security guard didn’t know what to think. The boy probably hadn’t seen anything important, but it would probably be worth a listen.

The boy nodded. “I saw Ronnie. He was with Mickey Mouse, but Mickey was being mean to him. Mickey took Ronnie.”

“Mickey?” The guard said. He was confused. How could a child think that Mickey Mouse was taking the kids? The guard just assumed it was a pedophile or kidnapper or something and knew that the kids would be found. Where did Mickey Mouse come into this?

“Yes, Mickey Mouse ate Ronnie. He ate that other boy too.”

The guard was speechless. He was still trying to think of what to say when the boy’s parents hurried over and pulled their child away, scolding him to be careful around the park and thanking the security guard for finding their son.

And as fast as the boy had appeared, he was gone.

The security guard knew he shouldn’t have been too bothered about what the kid had said about Mickey, yet he couldn’t seem to push the thought of it out of his mind. The security guard waited until his shift was over, but instead of leaving he went to the security room where a bunch of monitors displayed video from the surveillance cameras. He asked the people working there to review footage and look for Mickey Mouse around the time James had gone missing. The tapes were rewound and scenes from earlier that day were replayed on the monitors.

The guard’s eyes darted from one screen to the next until he finally noticed something. He told the men to pause the video. Everybody in the room focused on the monitor, even though there wasn’t much to see. Mickey Mouse and a small child were walking toward a maintenance room door in what seemed to be Tomorrowland, near the Space Mountain. The child seemed confused, maybe a little scared.

The guard decided to check it out before he went home. He couldn’t forget that one boy’s solemn expression or what he had said about Mickey Mouse. Just in case something happened, he took his radio and keys. The guard walked over to Tomorrowland, and found himself by the Space Mountain.

Inside, it turned out the maintenance room lead to an old maintenance tunnel. The lights were off. The guard tried the light switch near the door, but the room remained in darkness. The vague echo of a rat scampering across the room was heard, but the guard could not see it. He hadn’t thought to bring his flashlight.

Suddenly the guard gasped. His hand flew up to his nose. God, what was that horrible smell? It smelled like poisoned mushrooms or rotting meat infested with maggots. He tried not to breathe, but the smell was already in his nose. The guard tried not to let it sink onto his tongue as he stepped further into the room.

The only source of light was the door, which he had left wide-open. He hoped the smell didn’t get out so the guests could smell it. The guard assumed the maintenance tunnel went under Space Mountain, but in front of him was a dark, inky blackness. He squinted and had to hope for his eyes to adjust to the dark. For now, he could make out vague silhouettes and shapes.

He began to walk into the tunnel, visibility decreasing with every footstep. His footsteps echoed off the walls, seeming to pound on the concrete floor. The guard suddenly stopped walking, a few feet away from a brick wall. He assumed he had just come to a turn. He looked left, and saw nothing. He looked right and saw a small, flickering light.

He decided to go toward the light, and kept his hand on the wall so he wouldn’t get lost. The smell seemed to be growing worse. After a short walk, he reached the light, which was actually coming from a small crack underneath a metal door. The door was rusted and bent, and the guard knew it wouldn’t take much to rip it from its hinges. The security guard found the doorknob and gently opened it. The door squeaked as it came open. The smell seemed to explode out of the room, eager to get out. The guard tried not to violently puke at the terrible aroma, and looked inside the brightly-lit room.

His eyes needed a moment to adjust to the sudden light, and when they finally did the guard gasped in horror. Children littered the room, almost all the ones that had gone missing in the park over the years. He recognized James and Ronnie, lying on the ground with the other ones.

No, they weren’t just lying on the ground; the guard realized the children were dead.

He gasped again, and took a step back. Some of the kids had arms or legs missing. Each one had their eyes removed, leaving bloody holes in their faces instead. Thick slices were over some of the bodies, as though something with claws had got to them.

Something in the room moved. 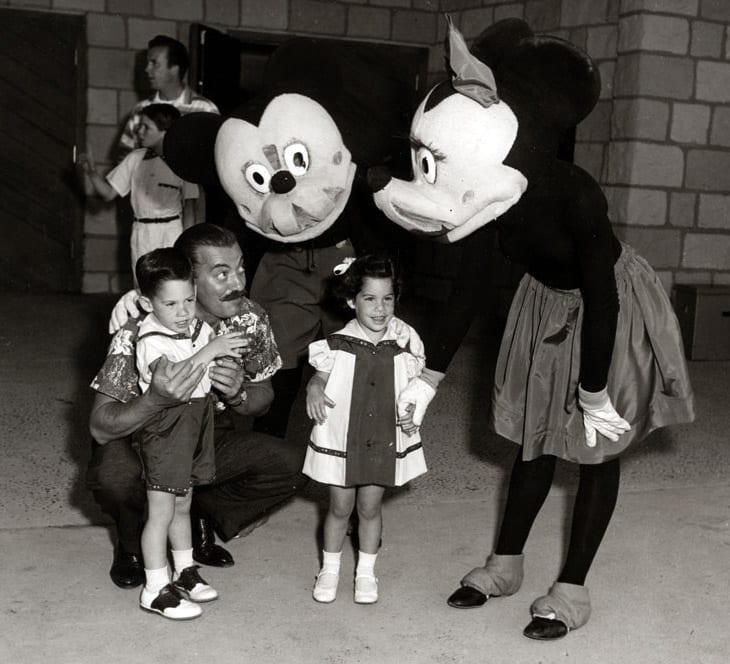 The guard tore his eyes away from the children on the floor, and he saw the most unreal thing staring at him. A giant Mickey Mouse stood in the room, observing the guard with wide eyes. Something was inside a Mickey Mouse costume, and everything came together in the guard’s mind. It would be easy for Mickey Mouse to lure kids away and not draw any attention. But now that same Mickey Mouse was staring at him.

They had a silent staring contest for a few quiet moments, but then the costume’s arm came up to point at the guard. A thick screech came from inside the mascot’s head, and the mouse moved toward the guard. The security guard turned and ran for his life.

The heavy footsteps of the costume behind him alerted him to the fact that Mickey Mouse was chasing him down the long, dark tunnel. The guard ran faster than he had ever run before, just knowing that death was directly behind him, close enough to stab him with a claw, close enough to wrap its arms around him and drag him back into that room…

…and then the guard was outside. He stopped running, and blinked a few times to clear his vision. The sunlight felt warm and reassuring to him, but when he looked back at the maintenance room he knew that the sunlight had stopped the thing in the costume. Maybe that was why it wore the costume- to protect itself from the sunlight, but it would not chase the guard anymore. He had gotten away.

The security guard reached back inside the maintenance room, groping for the doorknob so he could slam the door shut and make sure the thing didn’t get out. He expected to feel Mickey’s hand seize his and pull him in, but nothing happened. The guard slammed the door shut, and sighed deeply. He was safe.

A large group of guards entered the tunnel and found the kids, all scattered on the cold concrete floor. A blood-covered Mickey Mouse costume also lay on the ground in the room, right next to all the kids as though saying he’d always be there.

Whatever it was, it wasn’t human.

The guard turned back into the room and saw blood smeared all over the wall. The other guards were silent, all eyes fixated on the blood. It had been used to spell out a simple, three-word message on the wall:

The maintenance tunnel was destroyed, the door buried behind a concrete wall, Space Mountain was closed for a few days while it was searched, and the security guard quit.

To this day, children still squeal in excitement and hurry over whenever they see Mickey Mouse. Photo albums are being filled with pictures of the iconic mouse.

And nobody ever knows for sure who’s under that costume. Or what’s under it.