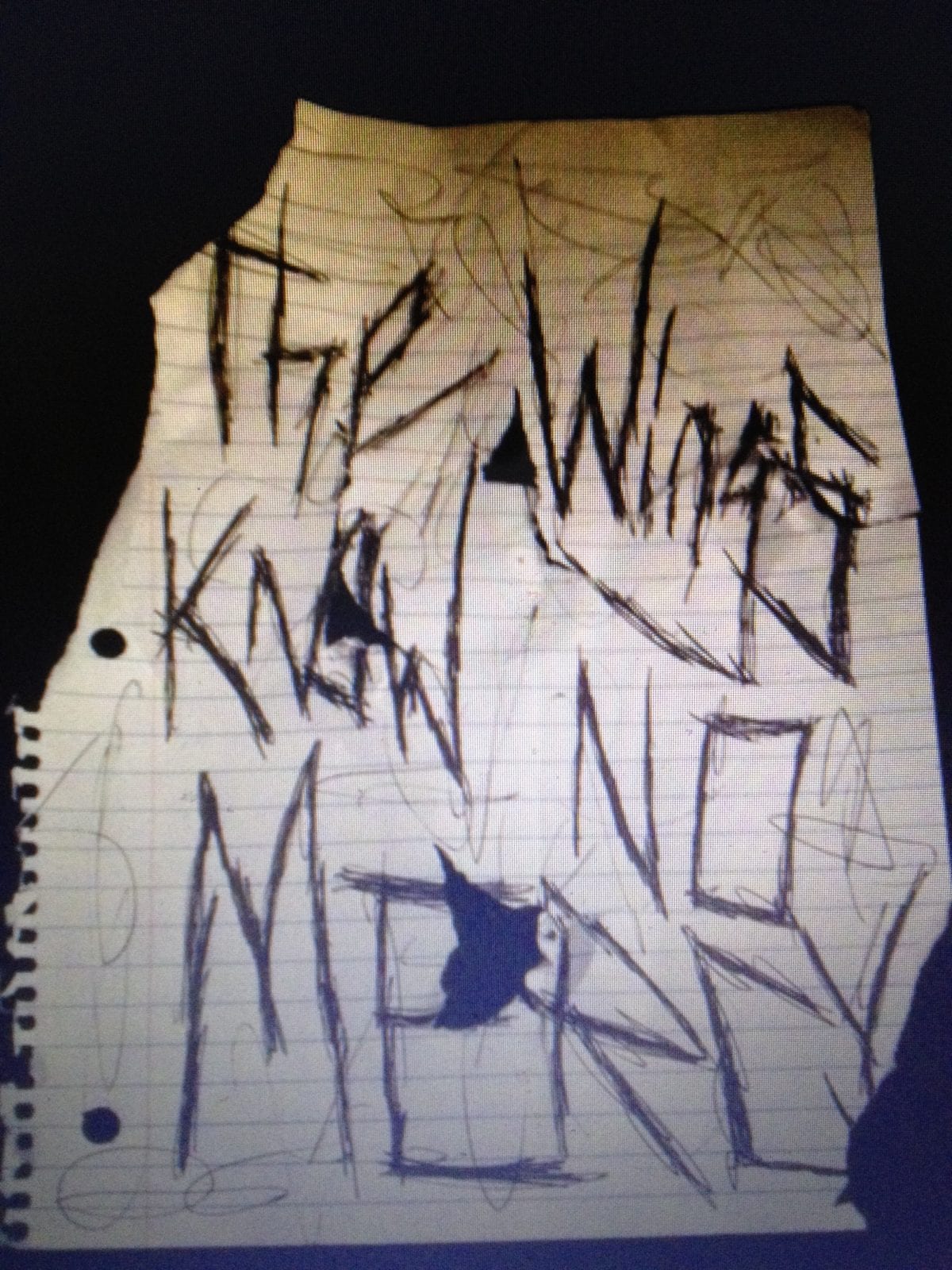 Posted at 00:00h in Beings and Entities, Deaths, Murders, and Disappearances by Creepypasta.com 35 Comments
Please wait...

We laughed and laughed about it for weeks. The whole idea of it was just blasphemy. It was like a bad horror movie escaped out of a $2 bin at the Lucky’s gas station and made its way to reality. They called him “The Carrier” and as soon as the Jacob Monroe video hit YouTube the gossip spread like wildfire. The security video of a little boy’s abduction was far from normal. A black-winged, human-like creature bombing to the ground at such a velocity it made the ground beneath his feet crack. In one swift move, the being used one talon-like hand to get a firm grip on the boys head, and used the other to slice his neck like a stick of butter. There was a long screach, enough to cut the video out for a second, but when it got back? Gone. Leaving only the boys scream to be lost in the sky and a thin, spinly trail of blood falling straight down. The beast soared to the sky, claiming the first victim visible to be visible to the public eye.

“carrymehome” was the account that uploaded the Monroe Abduction. It was the only video he posted, and soon after it hit headlines the video was taken down. Soon after that the account got removed. I never thought much of it, I tended to stay away from all of the bullshit myths people talk about. This one was different though, this one took me off guard. Mainly because it looked to real… The kid, his screams… It seemed real. Then again, technology was magical. Anything could be faked. I mean, come on… This kind of shit is just… A stupid story right?

That was my exact thought before the day of October 17th, 2008. Two months after the Monroe Abduction had run its popularity course and everyone kind of forgot about it. A few mentions every now and again, but nowhere near as much as before. Anyway, as I was leaving for school I noticed a box on my front porch, a gift box. A nice, neat box wrapped in metallic purple paper with yellow ribboning. No address, no note, just a gift box. I was already late, and didn’t think much of it. So I left it sitting there and went on my way.

I came home to a fairly bizarre sight, I was taking my usual route through the Brandermill Path’s when I heard a scream, a familiar scream, I arrived into my neighborhood and glanced up at my house. I had to do a double take, but I saw my mother outside vomitting profusely. I started to run, worried about what was happening. I asked her what was wrong but she couldn’t talk, she was barely clenching on the gasps of air. All she did was point to the box. Hesistating, I walked up to the already opened box to see… To see a truly grisly sight.

I stepped back in horror as I made out what the hell it was. After a second I instantly knew, and I was more horrified at the realization. It was my neighbors two cats, they were dead. It wasn’t that specifically that mortified me, it was that the cats had both it’s head removed, and grotesquely stitched to the other cats neck. A vice-versa… with heads… It took a minute to put into perspective what had exactly happened. At the time, I thought it was just a sick, twisted idea of a prank. But, I understand now. More on that later though.

The vision of the sick sight burned into my skull, and after that my life became a constant battle. I was always frightened, I went on with the war in my head for a long period of time, I don’t really know how long to be exact. I started to get better, I thought I was… I KNEW I was… But then my first encounter happened. And I will NEVER forget that night.

I had just gotten done with my baseball practice. I just remember being happy, walking home without fear. I then heard a a loud scream. A child. He was wailing, blubbering like a baby. I was running to see what was happening when I saw him. Looked no older then 9, he was tied tight to a large tree trunk, and crying heavily. But it was strange… He looked straight up, nowhere else. Just up. Waiting, crying. Out of the blue I heard a loud snap. Loud enough to make me cringe, like a bone being snapped in two. I winced, then looked back at the boy. He broke his upwards stare to look at what had just appeared. A waving body flowing with the wind. She was a woman, tied by her hands and strung up by a treebranch. I heard vague muffles, but the boy had nothing binding his mouth, and there was noone else there. The woman was alive, desperately writhing to get free at this point. The boy started to wail again when he was interrupted by what sounded like a thunderbolt striking a foot away. It was so loud it blew me off my feet.

I looked up, and saw what I hadn’t seen in years. The Carrier, standing straight up. Looking at the boy, mocking his fear. He turned towards the woman, who’s muffled cries were easily made out at this point. I should’ve ran, but I was paralyzed. I never got up when I fell, just watched… Watched as the creature, with one movement of his abnormal hand, snapped the womans neck like a toothpick. He cut her binds with one movement of his hand then dropped her… The boy screamed, I knew instantly who she was. It was his mother, who had just lost her life to this sick being. The Carrier was grinning ear-to-ear, content with his kill. He started to walk back to the boy when he stopped, dead in his tracks. He turned his head towards me, and looked… Stared into me with his hollow, non-existent eyes. He wasn’t smiling anymore, but a subtle laugh belted out of his sharp teeth. I still couldn’t move. He slowly turned back to the boy, thats when I ran. I was about ten feet away when I heard the shriek. The shriek of victory by the beast, who with one jump, entered the sky with his fresh kill. I looked back and noticed he didn’t take the body of the mother, only the kid. I was too frightened to care, as I turned around. And ran…. and ran… and ran.

It’s been a year and a half since I witnessed the murder of the boy and his son… I took a break from this to try and cope but it’s only been getting worse. I keep seeing him, just peering at me through my window. I keep getting packages on my front porch, there’s been 7 ever since the first one. I haven’t opened one and never will, I know what he’s trying to do. From all the data I’ve calculated, every victim of mysterious disappearance in the Virginia area who were seen before their disappearance had experienced some sort of traumatic event, something to induce them with fear. That’s the only way he can strike. The two dead cats… I think he was planning something, don’t know how his plan failed. The boy in the woods… The Carrier killed his mother before him, to pump him with fear before killing him. I have no idea if this is correct, but I refuse to leave my house. I see him once a day, EVERY day. Sometimes more then once… But he only looks. Waiting for me to fear. I know better then to fear him, but I don’t know how much longer I can. I can feel myself losing my sanity, I haven’t had a full nights sleep since the murders. I can’t eat a full meal without vomitting. And… I keep having delusions. I see the boy in my house sprawled out on the couch, dead. On the floor, dead. It varies. Same with the mother. It’s The Carrier. I don’t know if there’s more of them… But I pray for anyone who encounters him. Please, stay safe. I have a feeling it’s too late for me as of now…

(P.S. I wasn’t going to share this, but, I feel it’s my obligation to warn everyone… Before they turn into prey as well… Recently, whenever I wake up there’s strange, most of the time completely illegible markings on paper. I wake up with pen ink all over my hands, and its written in pen every time… I think, no, I’m sure I’m doing this. In my sleep, it’s part of my delusions. There’s only three that have ever made any sense to me… The rest are just scribbles. I’ve seen similar side-effects from the mythical creature Slenderman. If anyone can inform me about what this shit is about please email me. I can’t take this anymore. I’ve included photo’s of the three papers and my best interpretation of all of them. Please, help me..) 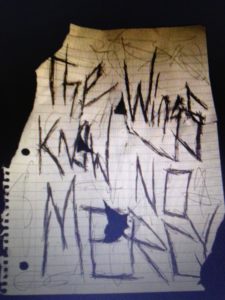 The first legible message I received (or wrote.) It says “The wings know no mercy.” I think it’s pretty obvious, The Carrier is a dangerous creature who shows no sign of hospitality. There’s tears and holes in the paper, I haven’t a clue why those are there. 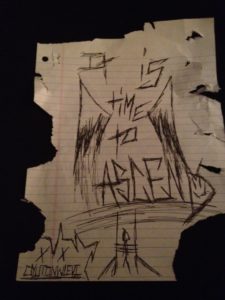 The second one. The message states “It is time to ascend.” with wings dripping blood around the text. I’m guessing it’s a message to me saying “Time to die” maybe? I don’t know. It shows a boy tied to a tree, which is a flashback to the murders I witnessed. He’s trying to fear me still. The papers sides are ripped in various places as well.(Also, on the bottom left corner, it says “OYUTONWLEVI”… I have a feeling I can interpret it but I’m too afraid to at risk of my well being. 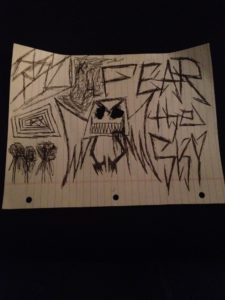 The image here was the last legible marking I got. Its a head and wings with a sinister grin, that of which I saw during the murders. The eyes are cut out of the paper. The text reads “Fear the sky.” It soars into the sky with it’s victims… That’s all I can really think of. Everything else I don’t understand.