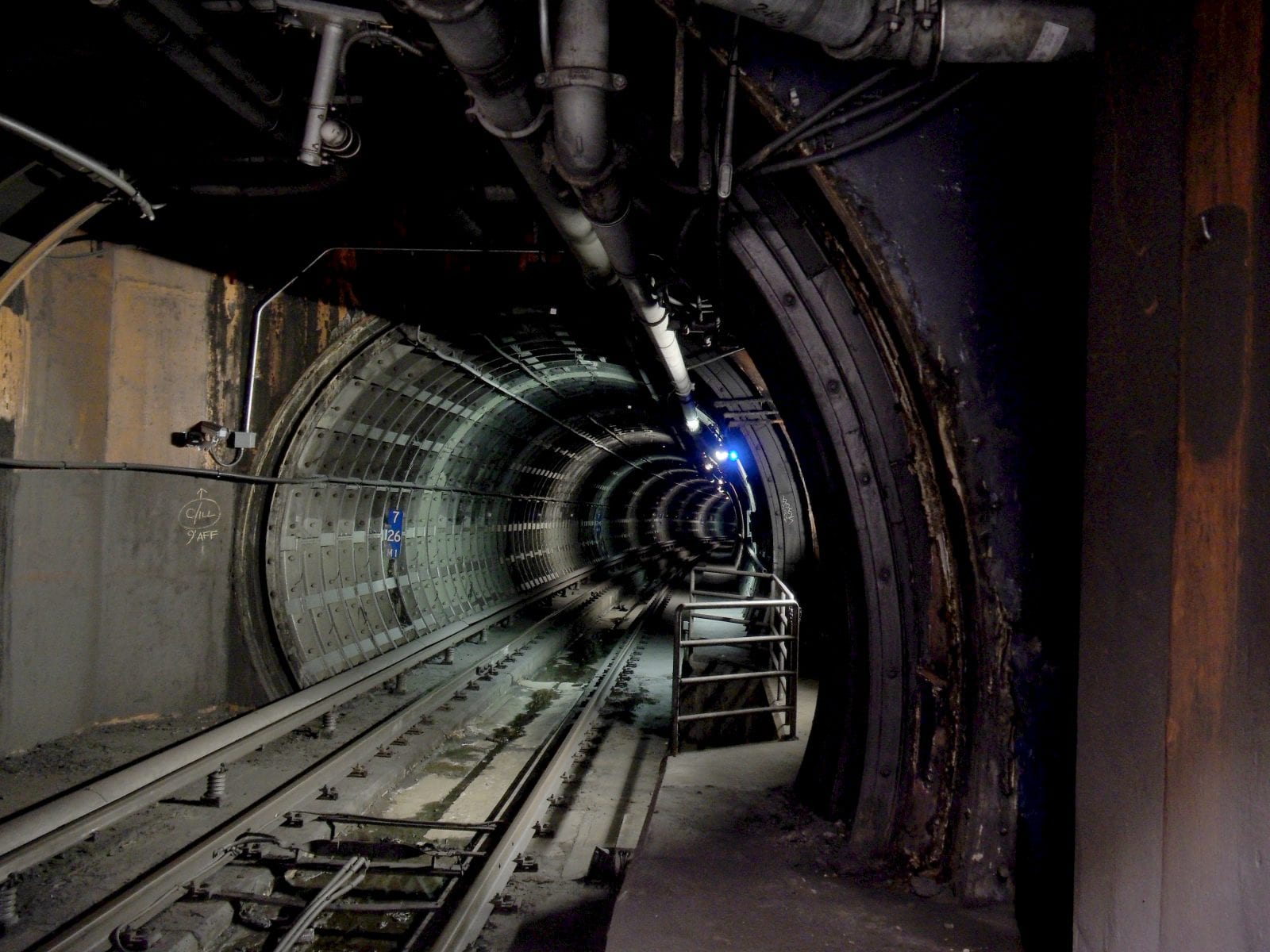 21 Apr Tales of the City, Part Four: The Last Stop

Posted at 00:00h in Beings and Entities by Creepypasta.com 10 Comments
Please wait...

"Tales of the City, Part Four: The Last Stop"

“That reminds me of a story.”

“What she just said about being late to catch the train.”

“Well, I’m sure I heard someone mention it, and that reminds me of a story that scared the hell out of me. Do you remember that subway drver last month who went nuts?”

“Remember it? I was on that train.”

“Do you want to tell the story about it then?”

“What else is there to tell?”

“A lot. Plenty of rumors around dispatch about that one. Not that I believe any of them, mind you, but the way I heard it, it happened like this…”

That voice was really starting to get to the driver.

They’d been hearing that for twenty minutes now. The train was stalled two miles into the Transbay Tube. It wouldn’t budge an inch, but the driver’s console showed that everything ought to be working, so it must be a problem with the tracks. She’d called it in, then assured her passengers everything was all right, and then waited. It wouldn’t be so bad if the PA didn’t seem to be on the fritz as well. Every few minutes a woman’s disembodied, mechanical voice chimed:

She couldn’t turn it off. She didn’t remember ever hearing that announcement before; but then, she’d never had a breakdown like this before either. The train hummed on its electric rails, sealed up inside a steel tube submerged 130 feet below the surface of the bay. Her ears were stopped up from the pressure the water above them. Up ahead, all the driver could see was darkness, the occasional lighting fixtures doing nothing except demonstrating precisely how pitch black it really was down here. She’d made this trip six times a night every night for seven years, back and forth across 30 miles of track between SFO and Bay Point, which meant back and forth through the underwater tunnel six times, and never before had she stopped to consider the crushing weight of all that water. She thought she could hear bolts straining and water dripping somewhere. Just her imagination, of course, but still…

She toggled the PA switch again; it hadn’t done anything the last five times, but she could help trying nce more. She checked the security monitors; the passengers seemed calm enough, considering the circumstances. Her four-car train held only seven people as they came up on one o’clock in the morning. Two were dozing and one was pacing the aisle. All but one had white earbuds snaking into the sides of their heads, and they would nod now and then to whatever they were hearing. She envied her rider’s calm. If it just weren’t so dark out there she might not be so frazzled. The tunnel looked like it went on forever. And if they had stopped anywhere but under the water. And if that damn voice would just knock it off…

“We will depart shortly.

“No one can hear me but you.

The driver blinked. What was that? She toggled the switch again, but of course, nothing happened. Up ahead one of the lights winked out. Or was that her imagination again? She fanned herself with her clipboard; the stalled train seemed hot and stuffy all of a sudden. The air conditioning was still on, according to her diagnostic panel. Perhaps it was just the confinement wearing on her. Would dispatch ever tell her what was going on? She thumbed the call button again.

“Any word on that track problem?” she blurted it out, not even bothering to identify herself first. The only answer was static. She frowned and hung up. She began to sweat, and she pinched the ridge of her nose, eyes squeezed shut. A headache was coming on.

“We will depart shortly, please wait” the automated voice whirred. Then: “They’re already inside. Look at the riders.”

The driver’s eyes snapped open. What did it say? She looked up and did a double take. She grabbed a Windex-soaked rag and rubbed the monitor screens, but nothing changed. Something must be wrong with the cameras? Cars three and four looked fine, but in car two both of the sleeping passengers looked like indistinct, grey blurs. In car one (the same car she occupied, in the driver’s carriage up front) the pacing man looked perfectly normal, but the woman in the backseat with the earbuds in also appeared blurry and distorted, as if a film of cobweb or a tiny fog bank covered her body. The driver looked over her shoulder, peering into the car through the plastic divider; the woman was still sitting there, staring at the blank tunnel wall outside her window, nodding her head to whatever was streaming through the wires in her ears. She looked perfectly fine. The driver chuckled a little at having scared herself, then rubbed her temples. The annoying recorded voice pinged again:

“We will depart shortly—

“No we won’t. We won’t leave until what’s keeping us here lets us go. You are not watching the riders.”

This time the driver was sure of what she’d heard. What the hell? She reached for the toggle.

A tingling sensation crept across the back of the driver’s neck. Her hand froze halfway on the switch. Her fingers trembled.

“Look at the riders again,” the voice said. She hesitated. “Look!”

When the driver looked she squinted and then leaned in, as if being closer would somehow change what was there. Two more of her passengers had lost definition on the video feed, leaving only two still showing up clear. The driver tapped the screens. What the hell? The sight of those blurry figures gave her chills, for some reason. Their images seemed to wriggle and writhe, as if a cloud of tiny insects were crawling over them.

The two sleeping passengers woke and, walking in unison, moved up to the first car. She expected to be able to see them clearly once they’d moved, but the grainy blur stuck to them as they moved. She looked over her shoulder again; both of them were in her car now. One was a teenager, short and fat, the other an old man, gray and thin. They sat side by side in the front seats, though they’d been separate before. The pacer didn’t seem to pay them any mind, but he did finally sit down. The driver watched as he fitted in white earbuds.

“It’s spreading. They’re inside. You have to get out of here,” the train’s voice buzzed at her.

“Shut up,” the driver mumbled. She looked at the monitors again: More passengers had moved up; four were in the second car now. They all sat rigid in their seats, and they all faced forward. None of them spoke. She called dispatch again, but this time there was not even static, just dead air. Outside, the tube lights were turning out one by one, and the train’s lights were flickering too.

“Help won’t come in time,” said the train. The PA warbled’ it was losing power as well. “You have to run. They’re in the wires.”

Now everyone was crowded into the lead car. All seven riders sat side by side in the front-most seats, staring at her. Their unblinking eyes looked flat and painted-on in the flickering florescent lights. She tapped on the plastic divider. “Folks,” she said, working hard to stop her voice from trembling, “they’ll be here to help us any moment. If you could all just head back to your original seats. We shouldn’t crowd the lead car in case…in case of an emergency.”

No one answered. No one moved. The man nearest her removed his earbuds and looked at her. Her CCTV monitors were failing one by on. The faithful voice of the PA buzzed in her compartment, barely audible as the train’s electrical systems slowly died. “They’re turning everything off,” it said. “They’re…sorr—…tried to warn…they’re in the wires. They use the wires to…”

The seven passengers all stood up. The driver went to open the door to her compartment, then thought better of it and locked it instead. Only the emergency lights were on now, and the passengers were dark blue silhouettes in the gray electric haze.

The static cleared for a moment:

Seven shapes crowded around the window. The driver tried to shrink back, but there was no room in the tiny compartment.

“The eight want new bodies. I told them not to do it but they wouldn’t listen. I tried to warn you. I tried. I—”

The PA went dead. The consoles were all dark. Outside, the tunnel was a long black passage to nothing. Inside, only one light was working. The driver heard fleshy palms slapping against the divider. Someone was pulling on the door. The flimsy lock jiggled. The divider broke in half and fell in, and then hands were grabbing her, pullin her, dragging her out. They were cold hands. She was screaming now, but with two miles of empty tunnel on either side and 130 feet of water overhead there was no one to hear her. They held her down. “Let me go!” she said. She felt cold all over. She felt something that made her think of the icy belly of a snake slithering across her body. One of the passengers leaned in.

“That’s it. I mean, someone finally showed up to evacuate the passengers from the trapped train, and when they did they found that driver curled up in a corner, screaming that she wasn’t herself anymore.”

“Yeah, you know, that there was someone else living inside her head now.”

“Is it just craziness, do you think?”

“That’s a good question. I mean, look how many strange stories we’ve found right here in this bar. Maybe something terrible really is going on. Under the surface.”

“Like I said, it’s all just rumors. Hey lady, you said you were on that train, right? Did my story…wait a minute, where’d she go?” 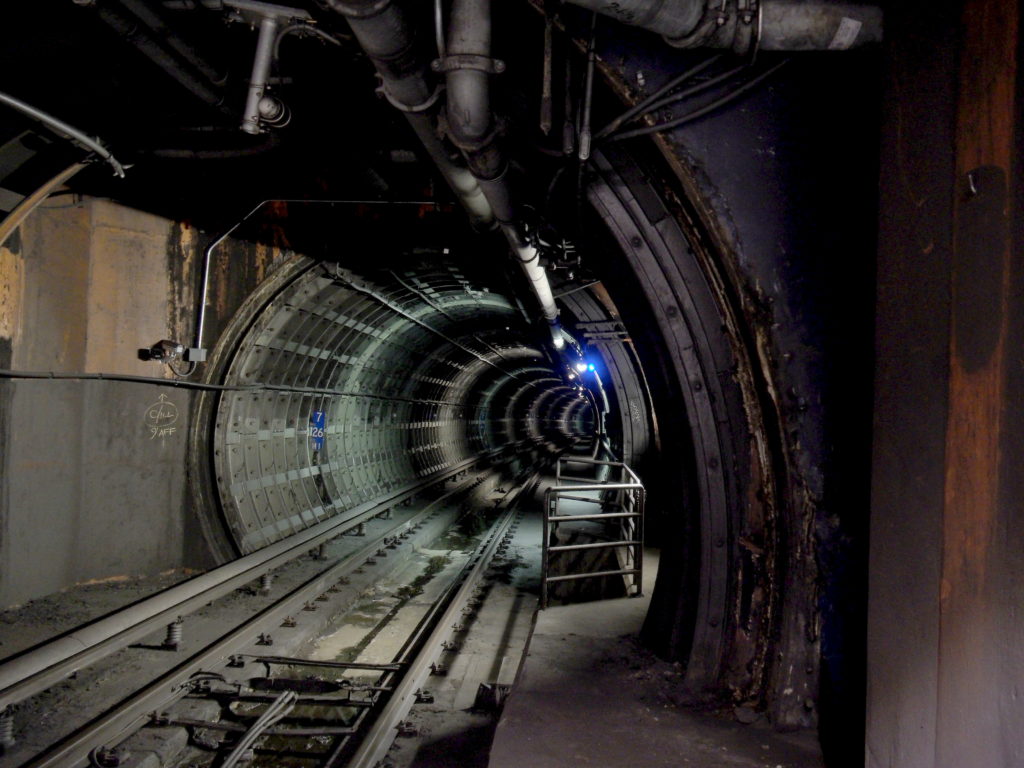 Tales of the City Series