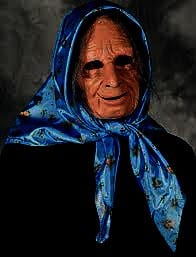 In 1984, there lived an old widowed lady by herself in a two story house who was completely immobile and bound to her wheelchair. Ever since the mysterious death of her husband, she required the aid of a carer who would visit her daily to help her with everyday tasks. What made it even more difficult, was the fact that the two floors of the house were only connected by an old staircase inside. When the old lady needed to move between the two, the carer would have to carry her frail body like an infant, up and down the stairs. One day the police received a call from the widow. There had been a murder.

Since police units were scarce at the time, and the murderer had already fled the scene, only one detective was sent out to conduct the initial crime scene report. He arrived to see the carer’s body splayed out on the floor with her vocal chords ripped out in a pool of blood on the first level of the house, with the old lady atop the staircase in her wheelchair watching him, still and silently, seemingly in shock. He could immediately rule her out as a suspect, due to her inability to move up and down the stairs, and because she was trapped up there the time the murder took place. It was similar to the death of her husband many years ago, who had suffocated in his sleep on the couch downstairs.

The detective put on his gloves, took photos, swabbed for evidence, and covered the body until the coroner arrived later – all routine business. He scoped the house downstairs for any clues, then asked the old lady if he could look upstairs. She insisted that she was upstairs the whole time and no one apart from her had been up there that day, but regardless of this the detective ascended the staircase to which she hesitantly moved aside.

Beyond the staircase, there was a narrow corridor, with three closed doors along it. He checked behind each of the doors, the empty bedroom – nothing, the bathroom- nothing. He became anxious as he slowly made his way to the final bedroom where the old lady slept. He opened it and everything looked normal. A bed, a wardrobe and a bedside table with a lamp. He checked every wall of the room in horror, as it was not what he discovered, but it was what he didn’t discover that made him stop dead in his tracks and slowly reach for his gun in its holster. It was a detail so minor that they had completely overlooked it on the last investigation of the husband’s death. There was no phone upstairs. He suddenly heard a noise as he withdrew his gun and rushed out of the room, only to find an empty wheelchair atop the stairs.