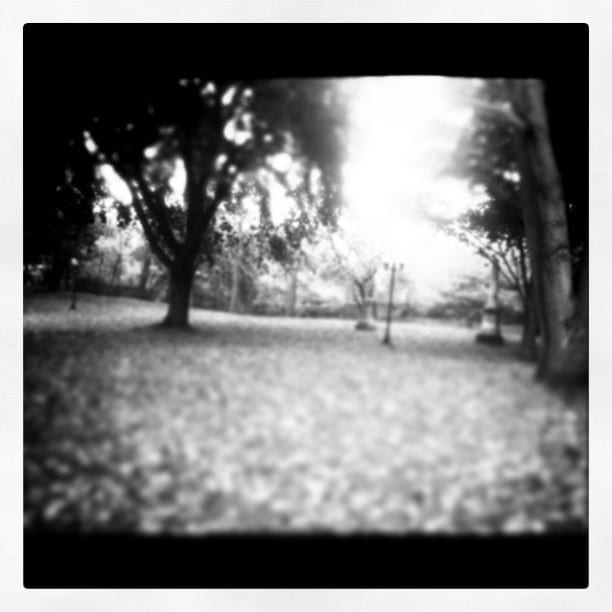 Alice is telling the guys she doesn’t know that she wants to see the end of the world. They aren’t talking to her. No one is talking to her. The party happens around her without touching her, as if she is hermetically sealed.

Outside, it’s snowing. She pauses for a second on the patio, next to the four kids smoking and discussing Nic Roeg movies, timeslip crushes on Julie Christie. They don’t notice Alice.

The falling snow looks like pieces of something that exploded in the sky and is now drifting downward. She pushes the rubble off her shoulders and hair. She walks into the woods.

The forest is behind the house having the party. Typical semester break thing, everyone home from school and getting drunk with old friends they hate. This is the new growth exurbs, the homes of the parents with two hour commutes and kids raised by day care. These woods Alice is walking into are the old growth forests. These are the woods that have always been.

The trees are all white, with stark dead branches for arms. It’s here, out on the margins of the forest, where she first saw The White Thing.

Her footsteps crunch and press into the bright ground. Motion detector lights pick up on the way she walks, like a magnet being thrown at a refrigerator. Her bright red ballet flats look like she’s bleeding, but the only trail is her footsteps. How does the little mermaid story really end? Not the Disney version, the first version, the real version.

What happens to Ariel again?

What always happens to girls in fairy tales?

You watch her walk out of the party and off the patio and through the back yard and into the trees. You say hi to the smoking kids. They look like fireflies in winter. You’re friends with Nate and he’s there. You just quit smoking. You want to smoke a billion cigarettes. You just ask Nate for one.

Out in the yard, the snow looks like jigsaw puzzle pieces. The only way you know how to build them is to find the flat edges and build borders first. These snowflakes melt on your hand before you can see where they fit.

You hate these parties. You’re trying to stay sober and it’s awful. All these kids with their jello shots and jello laughter and jello thighs. You just got out of treatment. Treatment wasn’t cool. You shouldn’t be here, not right now. Edward, the counselor at the center, always said when you leave treatment imagine that you are in Italy. Because you were in a very Frag-I-Le place in your recovery.

You hate people who say things and wait for you to laugh.

You know Alice in this really shallow way. If she’s the pond, you’re the rock skimming across the surface. You went to high school with her and had a muted crush on her. You didn’t have any classes together because she had it together while you had it unraveled There was this phenomenal distance to her that you found fascinating. Like she didn’t belong to the world. Your world, anyway.

Now your world is dry and boring. You watch everyone around you unravel recreationally. Friday night for them can be drinks and no consequences. For you, alcohol is the accelerant in the abandoned building of your heart. You as a building on fire.

You haven’t seen The White Thing, which is your neighborhood’s (ex)urban legend. Friends have, though. Mallory claims she saw it coming home from the beach, the night she stranded everyone there because Grey was hooking up with that girl with the bleached hair and teeth the color of surrender flags. She thought it was a weird white deer.

Connor almost hit it driving home drunk one night, he alleged. Everyone thinks that’s what he did hit the one night he wasn’t so lucky. He said it was a freaky white worm thing, like a great pale caterpillar at the edge of the woods, suddenly visible as he drove by.

The most detailed report of the White Thing was Nate’s version. The fact that he was on massive amounts of acid should be taken into account but still, in Nate’s words:

“Everybody else had gone back inside the house to watch a movie. Donnie Darko lol. I’m super fucked up, and I want to go for a walk. Its beautiful outside. It’s late, but I’m walking very carefully on the shoulder of route 39. The snowflakes look like stars landing on the street.

“Then I remember Mallory, telling that weird story about that thing she saw.

“All of the sudden things feel off. Like the temperature changed, or the street lights started making a different noise.

“There are no cars, either. None. You can see the traffic lights swinging; one side blinking red, the other yellow. And then, there under those lights, in the middle of the road, down the hill, you could see it. The White Thing.

“It’s body was big and lumpy. And it was white, like fur, I guess, but dingy. Like a faded outfit.

“I think it was about 80 feet away. And it looked at me. Big, weird ears, or horns or something flopped on top of its head. And then it cocked it’s head to the right, and just stopped.

“I felt like I could feel all the air around me. Like the individual particles of the air.

“I could tell it was looking at me. Its eyes — I know I was too far away to see them but I could. They looked like huge circular swimming pools, filled with black rotten water. I could smell it too — like spoiled meat cooking.

“That’s when it held out its hand, standing there, under those swaying traffic lights. I just stood there, unable to move. It wanted me to come to it. It wanted me.

“And then, there’s a car, out of nowhere behind me, honking and skidding and then coming to a stop like ten feet past me.

“This dude gets out, screaming at me, telling me I’m in the middle of the street he could have killed me and I’m just screaming back to him about the fucking rabbit and he’s like “What fucking rabbit?”‘and I’m like, “That big fucking rabbit under the lights!” and he points down the hill screaming, “There’s no fucking rabbit you crazy motherfucker!”

“And, of course, he was right; no fucking rabbit. Nothing. But I don’t drive on that road anymore. Ever.”

All Alice ever sees is the color.

Back when she was a kid, in her booster seat of her parent’s SUV, she remembered vivid flashes of white whenever they were driving past long stretches of forest. At her bedroom window, when she was little, right before she fell asleep, the white would creep up the glass.

She had weird dreams as a kid. Deer with their legs caught on some fence, decaying. GMO wheat twisting into fields. Drilling trucks pouring hot diseased run-off into the lakes. And always bursts of white.

The White Thing started coming in her window when she turned twelve. It was the color of bone. It never said anything. It pulled her blankets down. She started not being able to sleep. Whenever she did, she’d have these ultravivid dreams of subdivisions on fire. White fires burning blocks all the way down to the ground…

In the clearing of the forest, where kids come to smoke pot and make out, she sees the White Thing. Just where it said it would be. It touches her. The pine trees and white birches bend around her. In the dead of the living forest, the White Thing talks to her in whispers made of the echoes of bulldozers and the scratch of blueprints for new homes. You watch.

She’s holding a gasoline can, now, the kind people use for their lawnmowers. The whispers are an orchestra made of crickets and cicadas.

Alice is walking away now. She doesn’t look at you. Her red shoes are little fires at the edges of things as she walks back to the party.

It’s still snowing, and the snowflakes are all over the trees and you and the ground. The White Thing steps on them as it walks to you, breathing heavily, its body distorted and luminous.

The snowflakes don’t look like anything anymore. They blow in the wind, spiraling above the flames and the sirens and the illuminated evening, falling over everyone and everything, bright and cold and white.