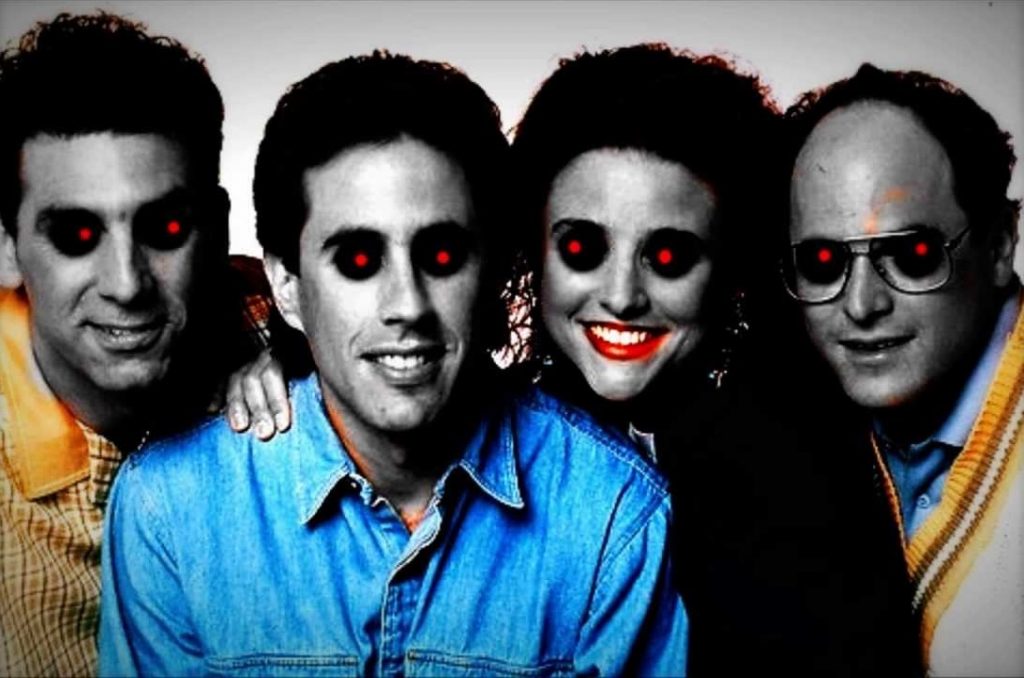 There’s a story about a “lost” episode of Seinfeld floating around the internet.

The episode was supposed to air around season six, but it was mysteriously cut. The “official” story about the episode was that it featured Elaine purchasing a firearm after being mugged, but many elements about this episode were never revealed until recently. NBC Executives refused to officially report on the episode until the Seinfeld season six DVD commentary. I have the tape but as someone who works within NBC. Unfortunately, I can’t reveal my sources.

I work at the GE building in Rockefeller Plaza, and I have access to their digital archives. That’s as much as I can divulge. We also have the entire original Seinfeld series in multiple formats, including original reels and VHS tapes. I noticed an episode with the production code “607” was missing from the tape set, and it was relocated in a set of old newsreels. The replacement episode “The Mom and Pop Store” was filmed a season later to replace the missing episode. It is oddly titled “The Mason”.

The episode starts out as normal, with Jerry’s apartment, but the camera is much more steady. Jerry walks out as though he’s been drugged and remarks that all of his family and friends have been dying lately. His buzzer rings and it’s George. George runs up, half crying and tells Jerry he’s seen something terrible. He’s mumbling and stuttering for about five minutes until he can form a sentence. There are still pauses for humor, but there is no audience or laugh track. George informs Jerry that planes have crashed into the twin towers due to a terrorist attack on New York.

Jerry turns on the news and you can see modern footage of the 9/11 attacks, all pre-filmed several years beforehand. George says that isn’t the worst part: Elaine and Kramer were in the towers at the time of the bombing. What proceeds is a graphic and explicit phone call of screaming and crying and Kramer saying that something terrible has happened, and Elaine is dead. Kramer screams there’s no air in the building, and he’s burning to death, and that he’s going to jump.

The camera cuts to live footage of a man falling from the twin towers. George genuinely looks upset and says, “I’m sorry Larry, but I can’t go through with this,” and he tries to walk off the set, but people stop him and push him towards the stage. He walks out Jerry’s prop window and you can hear him calling his agent. There’s a lot of mumbling, and you can see candles being lit behind the stage.

Jerry goes over to the bookcase and pulls it aside, revealing a ceremonial black table with candles, a dinner plate, and a strange box. There is a Masonic symbol against black cloth just outside where the fake stage window would be. Jerry says some weird things in a foreign dialect, and one cut of the camera shows a poster of Barack Obama (This episode originally aired in 1995). The scene ends with Jerry waking up in bed, as though it’s all a nightmare. Kramer comes in and asks if Jerry has seen a lizard. Jerry laughs and says, “We are the lizards,” and the camera zooms slightly. His eyes become slivered, like almonds.

The tape is only seven minutes long, and what proceeds is just twenty minutes of dead air. If you continue watching to the end, it seems there are three more news reports tacked on. The first is about an outbreak of swine flu, the second about a train bombing, and the third…

Publisher’s Note: This is a Creepypasta that was originally posted on 4chan’s /x/ board. It’s about a Seinfeld lost episode titled “The Mason.“