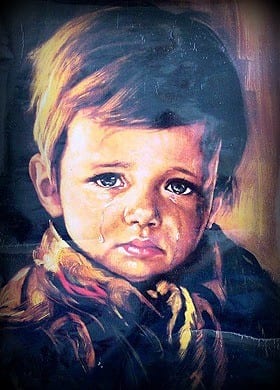 Posted at 00:00h in Beings and Entities by Creepypasta.com 23 Comments
Please wait...

When I was seven years old my ten year old brother Jamie was kidnapped, or so they say. The police claimed whoever had taken him were ‘professional’ in doing so. That I had been incredibly lucky to have not been taken as well. They described the kidnapper in this way because no finger prints were ever found on any of the furniture. My brother had never made a sound at the time and most importantly, there was no sign of a break in at all. None of the windows had been broken, the doors weren’t busted. Nothing.

Several days before his disappearance my father found a painting while rummaging around in the attic. He had been trying to find his old bass guitar after I had asked him if he played any instruments. Turns out he used to play in a band with some of his friends, and was a pretty decent player. His group was called ‘Serrated Edge.’ Unfortunately after an hour of searching the guitar was never found, but the painting was. It had been placed against a wall and surrounded by boxes, my father had noticed the golden frame glinting as he walked around.

The painting itself was magnificent when he lowered it down. It seemed to be in good condition despite being in the attic for so long. There was a house in the picture, a large grey house surrounded by grass. In the background a cliff could be seen, then a sudden drop which evened out to an ocean. It stretched on into the distance. Some birds could be seen up above circling the house. On the back were scrawled some words in red ink that read ‘Gadael ei ben ei hun.’ My mother recognised it as welsh, we didn’t know what it meant at the time. My brother and I weren’t very ecstatic about having it as a new house decoration, but my father loved its simplicity. He decided to put it up our bedroom.

That night we had dinner as usual, spaghetti I believe, then my brother and I went upstairs for bed. We both shared the same room. We were slightly afraid of the dark so our door was left ajar most days, letting some of the light seep in. After getting changed into our pyjamas and joking around for a bit we both settled down to sleep.

It was around 2:00am when I awoke. I realised I was hot and sweaty so pulled myself into a sitting position. Jamie was in his own bed to my left, sleeping soundly. My throat was parched, so I figured I’d get a drink of water. I pulled myself out of the bed sheets and left the room as quietly as possible, creaking the door open. Slowly I crept down the hall, conscious that the floorboards creaked. The last thing I wanted to do was wake everyone up. I headed into the bathroom.

On closer inspection I gathered that the smudge was some sort of man, it resembled a human but was completely black. It looked like it was standing stationary, looking outwards, its head was cocked ever so slightly to one side. I considered waking Jamie to show him the mysterious figure but decided he’d be cranky if I did so, I’d wait until morning. I retreated to my bed.

When morning arrived the figure was gone, to my dismay. I told Jamie about the figure but he didn’t seem to believe me. For the rest of the day I watched the painting suspiciously, believing that it may appear again at any moment. It didn’t.

As my brother and I were climbing back into bed that night I had forgotten about the figure. That is, until the same thing happened again. Just as before, I awoke in the early hours of the morning, soaked in sweat. This time I anticipated the figure’s arrival, and glanced at the painting straight away. I felt a twinge of fear. The smudge was there again, but it had moved, and it had doubled in size. It had adopted a new position, right in front of the house, a few metres away from the front door. Instead of going over for a closer inspection I forced myself to go back to sleep, hoping with every fibre of my being that I was dreaming. That night I fell asleep shaking in fear.

The next day was uneventful. I avoided the painting for the most part, spending time in living room downstairs watching TV. I mentioned about the dark figure to my parents that day, and of course they didn’t believe me.

‘You were just dreaming, Harry, that’s all.’ They told me. This was the last day I ever spent with my brother.

That night I had awoken at a similar time again, around 2:00am. I can’t remember exactly what time. With dread and fear churning in my stomach, I reluctantly glanced at the painting. It was completely black. I remember physically shaking in terror, believing that if I made the slightest noise I would trigger something. Slowly I pulled myself out from under the bed sheets. I crept over to the bedroom door and then ran over to the bathroom, the floorboards creaking as I went. I locked myself inside. I figured I’d stay here until morning, then ask my father to put the painting back in the attic the next day. There was obviously something wrong with it, I just didn’t know what.

What happened next will stay with me for as long as I live. After several minutes of waiting in the bathroom I heard the floorboards creak in the hall outside. At first I thought my brother had woken up, disturbed by my footsteps running down the hall. The creaking was approaching the bathroom, and stopped just outside the door.

‘Jamie?’ I whispered. No response.

I knew someone was standing right on the other side of the door. I just couldn’t figure out what they were trying to do. Did they need to use the bathroom?

‘Mum?’ I said. To this I heard a scratching sound on the other side of the door, as if someone was dragging their fingers across it. I backed away, terrified. After a moment whoever it was walked away, their footsteps creaking their way towards my room.

The next day I awoke in the bathtub to the sound of banging. It was my father, he was thumping the outside of the door with his fist.

‘Harry? Jamie? Are you in there?’ He snapped.

I answered it slowly, stiff from lying in such an uncomfortable position. Apparently this morning when my parents had awoken they had found our room empty. My Mum went downstairs to find us and my Dad looked around upstairs.

‘Is your brother in there you?’ He had asked when I opened the door. I shook my head but he didn’t believe me, and pushed past, searching the room. It was only after another half hour of searching that my parents began to panic. The police were called around. Everyone was convinced someone had broken into the house and taken him in the night. The police believed I had locked myself in the bathroom to hide from the kidnapper, out of fear. They questioned me relentlessly about whether I had seen his face, I couldn’t answer.

There was something else. On the outside of the bathroom door there were three deep gouges, diagonal from top left to bottom right. The police believe they were caused by a knife, repeatedly dragged across the surface. They claimed that the kidnapper had been trying to get me as well, but had thankfully given in. Our house was closed off for several days and we were provided with a hotel, while the police searched for fingerprints or any signs of breaking and entering. As I said at the start, they found nothing.

When we finally returned to our home my parents were a teary mess. They moped around slowly, answering my questions with one word answers. I knew anything I said about the painting at this point was useless. No one ever seems to listen to children in times of need. They continued to act like this for half a year. It was a horrible time.

Returning to my bedroom after everything that had happened was horrible. I remember crying when I saw my brother’s empty bed. His toys that were still scattered across the floor, toys he may never be able to play with again.

Before I turned to leave the room I glanced at the painting one final time… and noticed something peculiar. There was no dark figure, but there was something strange in one of the house windows. Curiously I approached and looked closer.

It was a face. A little boy. And from what I could tell he looked the spitting image of my brother. His face was contorted into one of terror, and he had tears streaming down his face. His hands were both pressed up against the glass.

Several months later the police gave up on the search. His funeral was held on April the 12th, to this date the saddest day of my life. After that all we could do was get on with our lives. I showed my parents the painting but they shouted at me and stashed it back in the attic. They thought the boy had been in the painting all along, that I was simply imagining the resemblance.

I’m thirty eight years old now, and have a place of my own. When I eventually left my old home I made sure to take the painting with me. For I am the only one who truly knows what happened to my brother.

The dark shape I saw all those years ago was some kind of entity, something evil that intended to trap us both in the painting for an eternity. It succeeded with my brother, but I had locked myself in the bathroom, so had been saved.

I keep the painting in the attic now, in case one day I might be able to free him. I can’t lose hope, like my parents did. After researching I found out that the words on the back of the painting, ‘Gadael ei ben ei hun,’ – had been a warning. It translates to English as ‘LEAVE ALONE.’ Sometimes, in the dead of night, I’ll hear a thumping sound coming from up there, footsteps roaming around in the attic. I’ll always shout my brother’s name, in hope he may have finally been let out. I never get a response.

(Admin Note: The painting shown here is The Crying Boy by Bruno Amadio. This painting has inspired quite a few short stories as it is supposedly “cursed” and quite notorious in its own right.)