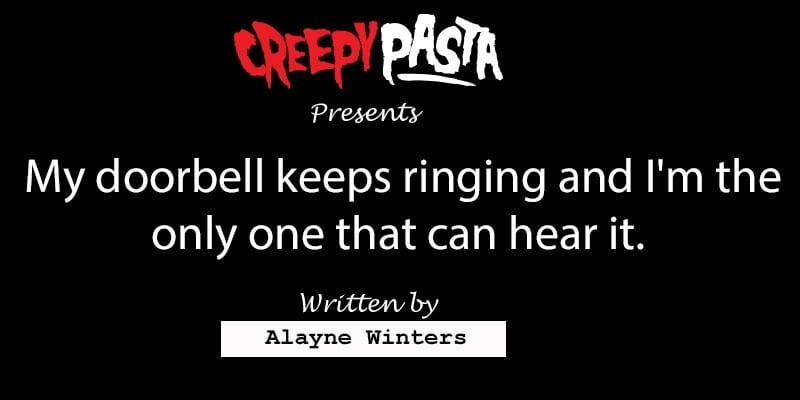 06 Dec My doorbell keeps ringing and I’m the only one that can hear it.

Posted at 11:19h in Beings and Entities by Creepypasta 0 Comments
Please wait...

"My doorbell keeps ringing and I'm the only one that can hear it."

So, I’ve lived with my parents in the same house for over twenty years. Nothing exciting really, just the same little neighborhood they raised me and my sisters in. Sometimes it’s nice, I know every backroad and where to find whatever I’m looking for, though it can be a pain in the ass at times. You notice who’s moved on to bigger and better things, and who’s still stuck waiting for opportunities. I’m sure you can all tell that I fit the latter.

After my older sister moved across the country to go to college, the house grew quiet. It was just my parents and I, and they didn’t have much to say to me. I’m in my late twenties, not interested in racking up a debt for an education, have no car, and in all honesty… I’m not really sure what my main goals in life are. I guess the back story isn’t really needed to push this along, but I figured I’d just fill you all in.

My sleep schedule is messed up due to binging Netflix and having nothing to fill my days. I wake up around five PM and kind of just let my time drift by. Which I didn’t mind at all until a few weeks ago. Now, my parent’s house has two living rooms, and with my siblings all off doing their own things, they pretty much gifted half the house to me. One day I was sitting, ass planted firmly on the couch, when the doorbell rang. The front door was just outside of my parent’s living room, so, I figured one of them would answer it. They were rarely ever anywhere else. You see, my parents were both retired and spent their days how I spend mine: With their butts on a couch watching their favorite shows. The only time they ever left was when they would go upstairs to sleep.

A few minutes passed before the bell rang again. I paused my show and walked over to the door. As I walked, I passed the small opening leading into my parent’s Livingroom. I stopped when I saw them both quietly staring at the television. squinting with slight confusion, I asked them if they heard the doorbell. They both assured me that the didn’t hear anything. I found this to be odd considering the door was less then four feet from them, but I shrugged it off. I opened the door and what I saw made me smile a bit. A tall man wearing a lovely green jacket with expensive looking polished gold buttons lining its left side; a nicely tucked black turtleneck sweater; brown Khakis; freshly polished black dress shoes; and a bright red tophat. I mean, writing it all down here doesn’t really do it justice, because I can Imagine how much that clashes in your heads, but it worked quite well on this man.

I answered with an awkward smile and a hello. He took off his hat and spun it as he bowed. “Hello, darling”. He said still bowing. I leaned back and called for my father. I mean, I wasn’t exactly scared, I just assumed he was there to see my mom or dad. I would soon find out that I was wrong once my father walked over and asked me what I needed. I gestured to the man and asked if he was a friend. My father asked me what I was talking about. I looked back at the man and then to my father

“I mean the man in the green jacket. Who else?”

My father was never one for jokes. He rolled his eyes and walked back over to the couch, scolding me as he did so. My heart began to pound and I turned back to the man on my doorstep. The fact that my dad didn’t joke around, threw the idea of him fucking with me out the window. I stared for a few moments before the man spoke again.

I slowly shut the door and walked back into my Livingroom. I wasn’t scared of the man per se, more so the idea that I was going or had gone insane. A few minutes passed and the doorbell rang again. I just sat on my couch in deep thought. That damn bell rang every minute for the next few hours, and no one could hear a thing except me. I barely got a wink of sleep that night, but even so, the next morning I told myself that the entire thing was just a weird dream. That is until I hear the doorbell ring again. I peaked into my parent’s Livingroom and noticed that they were again, both sitting on the couch. I looked through the peephole and there he was… The same man with the green coat.

“Okay, you got me. I’m freaking out and it’s not funny anymore.”

I leaned against the wall and folded my arms, staring at my parents with slight anxiety. My dad paused his show and looked at me confused.

“What are you talking about, Sweetie?”

My heart sank and tears filled my eyes.

My dad stood up and embraced me, begging me to calm down and speak. I told him that everything was fine and I just needed some air. I grabbed a jacket and exhaled sharply before I opened the front door.

“Hello again, darling.” A voice spoke. My back was still turned as I exited the house, but I knew who it was.

The man giggled and clapped his hands.

I know this whole thing sounds stupid. Why did I go outside, why didn’t I explain it to my parents? I don’t really know the answer to those questions. I wasn’t compelled by any magical force or anything like that, I just… I don’t know. I stared at the man for a few moments. His wrinkled face was pushed into a smile, and his baby blue eyes reflected the sun as he stood there unblinking.

“Why can’t they hear the doorbell or see you?”

He poked my forehead with a cane that he hadn’t had before I asked the question, and smiled.

“Because I’m not here for them, darling.”

I was a little upset with myself at first. Out of all the hallucinations my brain could’ve manifested as it slipped into insanity, this was the best it had? A frail wrinkled man in a weird suit? I chuckled slightly.

My hands shook with anxiety and I felt a lump in my throat.

“What do you want with me?”

He gestured to the street, and smiled.

I didn’t feel safe, and without saying a word I spun around and ran inside my house, slamming the door shut behind me. I then ran into my room and locked the door, crawled under my blanket and cried. The doorbell rang for hours; occasionally I would peek through my blinds and he’d make eye contact with me, waving and smiling as he continuously pressed the doorbell. After a while I couldn’t take the ringing, I slid open my window and screamed at him.

He smiled right at me and kept pressing it.

“It’s three in the morning! What the fuck do you want from me!?”

He smiled again and placed his arm at his side.

“I just want you to come with me, dear.”

“And where would we be going!?”

“I sure would hate to spoil the surprise. Why not just join me?”

He reached his hand toward me and stood silently on my doorstep smiling. I was beyond mad, or was it scared? Whatever I was feeling wasn’t good. Something appeared on my doorstep and refuses to leave unless I go with him to who the hell knows where? I’ve had it, I ran out of my room and into my garage. I grabbed my dad’s hammer from his work bench and threw open the front door.

“Are you coming?” He asked as I jumped onto the porch. I swung the hammer at him, but it just fazed right through him. The force of the spun me around and I landed on my ass.

“Be careful my dear, that can be dangerous.”

He began laughing and wiped his nose as he stared at me. I got up and began striking the doorbell with the hammer repeatedly, refusing to stop until finally my father ran out and restrained me.

The man watched with a smile as I fought with my father. I didn’t give up, I kept struggling, taking any shot I could to strike that damn bell. Finally my dad was able to pull me back inside and set me on the couch.

“Would you like to explain just what the fuck is going on young lady?!”

I pulled my knees to my chest and sobbed. I didn’t know what to say to him, so I just told him the truth. He listened without interrupting and nodded with understanding. When I was finished he scratched his head and hugged me. I stayed at a mental hospital for the next two weeks, explaining to psychologists and counselors the same story over and over again. None of them believed me, but they were extremely comforting and nice about it. Was I supposed to be mad at them? I didn’t mind one bit because I slept like a baby. You know what wasn’t connected to my room? A doorbell…

I’ve since been released and am currently back at my parents house. I feel terrible for them because they’re an awesome support group and just want to see me get better. It’s just that last night the doorbell started ringing again and no one can hear it but me. Sometimes I just stare through the peephole and I know he knows I’m there. He looks right into it and smiles at me. Chuckling as he speaks. “Come with me, everything will be okay.”

It’s been sixteen hours and the bell hasn’t stopped once. M…Maybe if I go with him it won’t be so bad.