Pretty standard opening for a psychologist sitting down with a patient for the first time. She was young, pretty and Shahrokh (an unnecessarily ethnic name) immediately felt comfortable in her presence.

“Well, before I launch into what’s been happening recently I think I’d better start at the beginning.”

The therapist smiled in agreement. She leaned back in her chair and opened a small notebook.

“You see, over twenty years ago I had a second cousin named Alice (you think I’m going with another ethnic name? Think again). A beautiful little girl. I met her when she was two.”

The surprisingly unethnic-looking man fidgeted in his seat, unsure how to continue.

“The first time I met her was at a restaurant. We were seated at opposite ends of the table and her parents, my cousins, kept feeding her these little animal crackers to keep her happy. She would either eat them or try to hand them back and make a game out of it. Adorable.”

Shahrokh (yeah, that name is a mouthful and it sort of makes you think that the animal crackers only came in the shape of a cow. A change might have to be made) leaned over and picked up his bottle of water and took a swig.

“Then her parents told us to watch as she did her magic trick. We did. “Do your magic trick,” they said to her. Alice got a big grin and said “Majjj”… that was how she pronounced magic.” The way Shahrokh (ok, well clearly this name was a mistake. Let’s just call him Tim from now on) said it made the psychologist laugh despite herself. When he heard the laugh Tim got a weird sensation but continued the story.

“They put one of the animal crackers in her little hand. “Majjj,” she said and closed it. Everyone leaned in and Alice was thrilled to have everyone paying attention to her. She opened her hand and the animal cracker was gone and everyone at the table clapped and hooted and hollered their approval.”

(Shahrokh would never have said “hooted and hollered”… he was killing the story. Tim, on the other hand, has no problem saying it.)

“Yeah, it was. She kept doing it through the course of the evening and everyone was having a great time. The problem was I couldn’t see how she was doing it. Everyone just assumed that she was dropping the cracker but when I looked under the table there were no crackers on the floor. I looked on her lap and saw nothing. Her arms were bare so there was no place to stash a cracker and I watched her parents closely to see if they were complicit in the trick but they seemed innocent enough.”

After jotting down a few key parts of the story on her notebook the therapist asked, “So where were the crackers going?”

“I don’t know. I really didn’t know. It seemed like I was the only one who actually didn’t get the trick or noticed that the crackers were actually disappearing. I felt a little like a fool, to be honest.”

Tim took a short breath in. “A few days later I volunteered to babysit Alice. I hate to admit it but I had an ulterior motive. I wanted to find out where the crackers were going. How she did it. Only minutes after her parents closed the door behind them I had a box of crackers out and was sitting in front of her asking her to do her majjj. She did. Again and again.”

“And? Did you figure out the trick?” asked the therapist.

“No. Alice would just laugh and say “majjj” and the damn cracker would disappear. She did it with anything that would fit into her hand. She disappeared bottle caps and coins and an eraser. It freaked me out.”

More note jotting by the therapist. “Interesting” was all she said.

“I know it sounds crazy.”

She stopped jotting. “Crazy isn’t a word I use a lot” she replied, smiling.

“You haven’t heard why I’m here.” He wanted to say it lightheartedly but the small chuckle he planned on adding at the end died in his throat.

“Alice disappeared two weeks later.” It took a few moments for him to continue. “She was never found. Just gone. It wrecked everybody.”

The therapist automatically reached for the box of Kleenex in a well-rehearsed gesture. “I’m so sorry,” she said.

Tim sobbed but kept trying to continue. The first few attempts were swallowed up with grief.

“I fucking bought it and brought it home and it’s still in my refrigerator. How can I throw it out? I didn’t even drink the milk. I just poured it out when it went off.” Tim’s hands were balled up in tight fists.

“Breathe. Take your time” was all the therapist could say.

When he was finally able to calm down a bit he carried on, head down. “Here’s the crazy part… the last few nights I keep hearing someone in my kitchen and then in the morning, when I walk in, I find a single animal cracker on the table.”

He looked up slowly at her. “I’m too much of a coward to go see who’s there. I’m just so scared I’ll walk in and see a little girl standing there and shit my pants. Or I’ll walk into an empty kitchen and then open the refrigerator door to get a drink and when I close it Alice will be standing there and I’ll stand there frozen or I’ll shit my pants.”

He fumbled in his pocket and then produced an animal cracker.

“What is going on?” he finally asked the therapist.

She leaned forward and opened her hand. He placed the animal cracker in it. She closed her hand and when she opened it the cracker was gone.

I realized I never gave the therapist a name. Let’s call her… Alice.

A collection of short stories isn’t really a book. It’s more like dozens of ideas that could have been books if they were thought of by someone with a better attention span. To put it another way; if you took an infinite number of Shakespeares and put them in front of an infinite number of typewriters with an infinite amount of time, they still wouldn’t come up with the complete works of Lance Manion. To put it yet another way; you throw down manure to feed crops. Just imagine this book as manure (not too great a stretch) and your imagination is the crops. If you don’t understand this metaphor then this book probably isn’t for you. 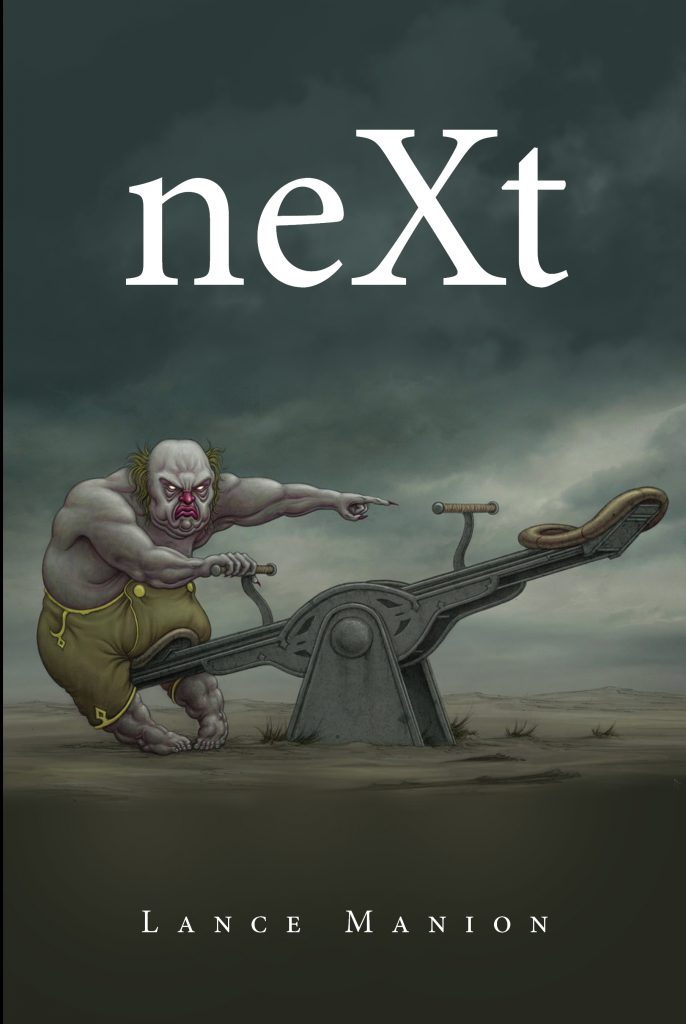