Posted at 11:01h in Children and Childhood by Creepypasta.com 0 Comments
Please wait...

"I Was Born on a Child Farm"

Publisher’s Note: This story is preceded by a prequel. To read the earlier chronological installment of this series, please click here.

“There is no free will.”

Those are the first words I ever read. I woke to them every day for many years. They were written on a sign. The sign was hung above the opposite row of bunks in the Sleeping Barn. I have no memories from before the farm; I assumed I was born there.

None of the children there knew why we were here or where we came from…nobody even knew how long we had been at the farm. Some children aged. Some didn’t. I can’t remember much, but that’s what happens when you are not given too much to remember.

I remember always being deliriously hungry. We would be fed three small meals a day, but before every one Headmaster Ranon Xinon would make us watch him sprinkle a few drops of clear liquid from a label-less brown bottle on the food. Then he would serve behind a steel door and slide out each meal through a window so you never knew if your meal was poisoned. Most of us danced around the edges of their food. Nobody was eager to dive in, not when we had seen a dozen kids turn blue and die in front of us after picking the wrong meal. Several of us rarely ate the food; I never ate from my plate. I would scavenge what little clean scraps there were in the garbage. I ate four crows (they are just as disgusting as saying implies) and I would go full Renfield and eat flies, ants, dandelions, cockroaches, clovers, pillbugs…anything living and somewhat edible. I would keep the spiders. I had a special place for those.

The 20 boys and 30 odd girls worked the fields that provided all the food to “the farm”, a crumbling wood compound fenced by tall barbed wire and the surrounding woods. Past that, the wilderness. Even though there wasn’t spotlights or guards, the farm was much more inescapable than a prison.

Every few weeks Headmaster Xinon would take the near 100 of us to the edge of his farm, where he would blow a strange brass whistle; bloodshot German Shepards sprang from the underbrush as if they had been waiting for his call, mouths foaming as they gnashed their teeth on the rusted barbed wire, threatening to break in and chew us alive as the Headmaster coldly smiled and spoke with a voice that sounded like gunshots fired far away:

“They’re old guard dogs gone rabid. I have learned…through one of you!..how to train them so they only obey me, and if you run, they will kill you…or make you wish you stayed here with ME.”

The farm never had answers. Very few people came, the rare delivery trucks, a prison bus, a black tinted window Thunderbird that made a powerful turbine roar, as if rocket engines were installed under the hood – and they only dealt with the headmaster. The only person to leave with the driver of the Thunderbird.

There was a rumor that we were not real kids at all, that Headmaster Xinon was a demon who crafted us all from blood and ash. We never dared speak to the Headmaster and asking a question was ludicrous, as a question would mean a touch from his hard, cruel hand, a hand that made the surrounding air a pin-cushion of pain that would sting your skin even if his hand grazed yours.

But above the poisonings, backbreaking labor and cleaning, scavenging for food and never knowing a single day what was going on, we feared the nights worst of all. Being exhausted from working in the fields all day wasn’t enough to overcome the fear to sleep. When it was darkest and the air had fallen still, we would hear the headmaster’s creaking footsteps just…appear in the center of the drafty barn without any kind of warning. Sometimes we would hear him walk on the roof. Up the walls. On the ceiling. I can still hear his breathing if I close my eyes, that sick pig’s wheezing agonized breath that sucked air in and out in a guttural exhaust. The breathing and the footsteps would circle and circle until he heard someone cry. That’s when the taken would give one last cry before they were gone, along with the Headmaster. The missing child would return to their beds in the morning bearing new marks- a glancing finger left a nasty red and purple smear on one’s side, sometimes black fingertips dotted their bodies. We would never say anything about these marks to anyone; we were always afraid the headmaster would hear, and give us matching marks to boots.

Sometimes he would touch you with his entire palm, leaving a wrinkled imprint as raw and painful as a hot iron brand. I had a few marks as well, but I considered myself lucky that I only had a few marks, as far as I could tell.

This was my life for what felt like many years- I swore I could have named 25 separate times the frost came, but we had no way to keeping track of time, not even by our ages. I swore sometimes we would see a kid go from looking 13-14 back down to looking half that. Time made no sense at the farm, and I knew that I wasn’t going to get out by waiting. When I had woke one morning to find a searing red hot handprint of headmaster Rannon Xinon on my upper arm, a hazy starvation-induced plan emerged from the fog of my brain.

I went to the “special place” by the cisterns where I had kept every black widow spider I had come across. I kept them behind a false brick on the side of the farmhouse, where I had once collected 8 of them and discovered that black widows were cannibalistic when grouped together. Only the strongest survived. I kept hosting “tournaments” until 108 black widow spiders were reduced to 26 of the most toxic, twitchy and bite-crazy widows you never want to meet. I was bitten only twice, and came very close to an agonizing death both times. I knew one bite wouldn’t do a monster like Xinon in. I was set- I was ready to enact the last stage of my plan when everything changed on a cold day in early December when a helicopter as black as the Thunderbird made a couple of low circles over the farm.

Ranon Xinon went insane. He poisoned half of the meals the day after the helicopter came, and after breakfast, he took us all outside to form a queue outside the chicken slaughterhouse. When he began leading us in 1 by 1, a few joined me and ran. Judging from the screams, he caught most of the runners, but he didn’t catch me. I spent many nights fantasizing about this moment, when I wasn’t listening to his footsteps of sick breathing.

I put the black widows inside an old compartmentalized chocolate box scavenged out of a woodpile, perfect for keeping each one locked away. I went up through the floorboards and hid in the space in the bathroom. The Headmaster may not sleep through this paranoia, but everyone’s gotta go eventually, even monsters. Those cisterns didn’t shit themselves.

It was dark by the time that he arrived with his candle. The sound of him pulling down his trousers and his simultaneous grunt masked the sound of me moving the planks above him aside and pulling the lid off the box of 26 nightmares, showering the headmaster with ravenous, crazed gladiators. My beauties began biting the Headmaster as soon as they landed. The terror of the child farm, the demon named the Ranon Xinon lied curled around his toilet, eyes swelling shut, a mouth locked in a disgusted, surprised outrageous gurgle of horror as spams racked his whole body. Before his eyes swelled completely shut, he saw my small seven-year-old face peering down the hole in the darkness. The missing child. The headmaster began to cackle.

“I knew this could happen. There is no free will. It’s fine. I lived ten thousand years already. I lived YOUR happy summers, wonderful marriages, fruitful successes. Your life was beautiful beyond compare. That’s why I-” he smashed a few spiders scuttling around his face but I could tell he was fading fast. “…You and I are ghosts now” were his last intelligible words before the Headmaster’s breathing stopped.

I hid for four hours before carefully making my way to the window, the safest place in the room. The spiders were done and gone.

The chopper returned with a convoy of armed men right before sunrise. I was the only survivor of the farm. The captain of the operation was a man named Clinton Moxley, Chief Field Investigator for the Secured Bureau of Reclamation. He adopted me, and I took his last name. He was the one who named me Howard. He even said I knew him from “before”. He also said he was able to find me due to “tracers” injected into me before I went. I never knew I had them.

I told my father what little I knew. He corrected me on a few things.

“He chooses victims who had good lives” my father would explain as he would tuck me in, “His existence is the greatest evidence that Time is a physical dimension, something that exists and can be crafted, and stolen. He lives your years in just a few seconds. We believe he is responsible for over a hundred thousand homeless children across the world, another young human with a frail, old used-up timeline…”

I asked the only father I knew why he adopted me. He brought me to the master bathroom’s dual mirrors and told me to take off my shirt.

“Because I owe you. You were an old man once, Howard. You were my partner within the Bureau. You went- you were sent- into the farm by yourself to try to shut it down. I will make sure you will get the help you need to remember. I had hoped that you would remember something about your past on your own, but…I see the Headmaster got to you too…” I looked behind me, using the set of mirrors to see my own back for the first time, and seeing it covered in handprints.

That was many years ago. True to Headmaster’s words, I had been a ghost among the living since then. It’s been hard even sleeping, especially now.

Check out Howard Moxley’s chilling compendium, REPORT 50: Summary of the Most Supernaturally Active Objects, Places and Entities Located in the United States of America, now available on Amazon.com in both Kindle and paperback formats.

The Secured Bureau of Reclamation, or SBR, is a formally undisclosed scientific research bureau that utilizes the most advanced methodologies and technology currently available to reclaim, ascertain and research the various aberrations of human knowledge encountered within the United States. The Bureau is considered to be the sole authority of locations, objects, people, creatures, entities and constructs that contradict our current understanding of the known universe, and our place as humanity within it. Herein contains what the SBR considers to be the most powerful aberrations localized within each American state, referred to hereafter as REPORT 50. 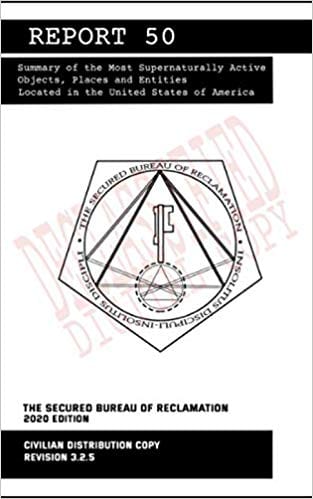