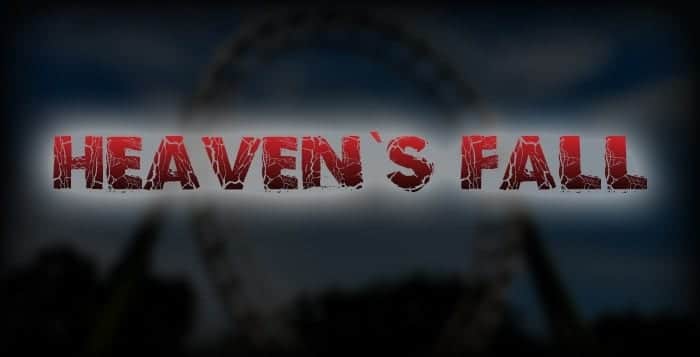 Posted at 13:41h in Deaths, Murders, and Disappearances by Creepypasta 17 Comments
Please wait...

The laughter stopped, and silence shivered throughout the theme park. A crowd gathered around the scene, and the painted faces of smiling families were turned to horror as they stood and stared. Sirens echoed in the summer air, and ashen staff tried desperately to calm the public.

At the time, the papers were calling it the worst disaster to have ever occurred on a theme park ride, and I dare not question the truth of that statement. For although six years have now passed since the day, no explanation has been uncovered for what caused eight people to fall to their deaths. Instead, a series of strange legends have built themselves around the ride, and as such the truth of whatever happened will likely never be properly known.

The ride in question was ‘Heaven’s Fall’, a monstrous drop tower piercing the sky above the World of Adventures theme park. Built upon dark religious imagery, the ride was said to resemble the fall of an angel cast out from heaven above. Riders were slowly lifted skyward, then after an uncomfortable pause at the summit, were dropped back to earth at the mercy of gravity. The ride was painted in a deep, glistening black, and was adorned with sculptures of dying angels, their wings broken and their arms reaching forever to heaven.

The accident happened on the first and only time the ride was used. It was mid morning, and yet the queue line was already bursting with people, all waiting to try the newest attraction which dominated the skyline of the park. Before long, the gondola was filled with eight nervous riders, and each pulled down an overhead restraint that covered their shoulders to keep them in place. After this, Heaven’s Fall clanked and whirred into action, slowly propelling the ill-omened riders hundreds of feet into the air.

It is frightening to think of what happened next. As the gondola paused at it’s dizzying summit, the restraints which covered the riders shoulders lifted upwards to their original places. It was as if they had been mechanically unlocked, and had returned to the previous overhead position that they should have returned to when the ride had completed.

The riders screamed, grasping to pull the restraints back down, yet finding them firmly locked into place. The ride operator hammered at buttons, urgently trying to stop the ride as terrified witnesses ran from the queue. Nothing could be done.

The ride dropped to earth as it was programmed to do, and all eight people were thrown forwards, down onto the hard concrete below them.

Today, Heaven’s Fall is rusting and silent, still standing amid busy rides and attractions, but cordoned off from the rest of the park. It has become but a steel, gruesome memorial to those who lost their lives on it’s opening day. To some, it’s appearance in the park is akin to a graveyard obelisk, and the carven angels which decorate it are thus reaching to the sky in mournful remembrance.

I will admit that I have something of an obsession with Heaven’s Fall. I was not aware of it at the time of the accident, but when I first saw it’s rusted remains peering at me when I went to the park, that hideous ride infected my mind. There is something about it, how it stands apart from the other attractions, how it speaks of dark and unsolved things, how it inspires such fear and fascination in all who know of it’s terrible accident.

Since I discovered Heaven’s Fall, I have collected everything that I can find surrounding it’s history and it’s accident. I have access to countless newspaper cuttings, have purchased maps and unused souvenirs of the ride, and even own a rare promotional poster, showing a Lucifer-esque angel, falling to earth against a silhouette of the park.

Yet what fascinates me most about Heaven’s Fall are the strange stories that are told of the ride. After all, we each put our trust in amusement rides. We strap ourselves in and challenge them to scare us, longing for greater and bigger thrills whilst safe in the knowledge it is only a ride. But when something goes wrong, that illusion of safety is immediately shattered. Colourful paint and buoyant effects can no longer hide the grey, cold machinery beneath.

Most of the stories about the ride are nothing but the creation of idle minds, but it is not such legends which interest me. Instead, I have found a number of persistent beliefs which all seem to be based on a few distinctive tales.

The first of these is the most common. Before the attraction had reached completion, a range of promotional advertisements were released to spread awareness of the ride. Within days, fundamentalist groups had spoken against what they deemed as objectionable imagery for the new attraction. To them, the representation of falling angels was essentially diabolic in nature, and many campaigned for the theme to be changed. Some even went as far as to claim that such a ride was evil, and urged the populace not to visit the park. Further to this, fanatics had previously been arrested for breaching the walls of the closed theme park, and attempting to hang banners on the ride.

As such, the first legend of Heaven’s Fall was formed in the minds of a public craving answers. Some believed that the ride had been tampered with, and that the accident was in fact orchestrated by madmen blind on religious fury. This belief was later strengthened by the family of one of the deceased riders. They trusted not in the doctrine of those who called the ride and it’s theme evil, and publicly affirmed their own belief that “the bastards probably made it go wrong themselves”.

A similar theory is darker in motive, yet to some it is closer to the truth than any other. The creator of the ride, a Mr Niklas Beringer, was thought by some to have purposely programmed the restraints to fail. “It was no accident”, a contact from within the industry told me. “Beringer knew it was going to happen”.

This belief is strangely shared by many who work in the field of amusements, where Niklas Beringer was known as ‘radical’. It was said that he wanted his ride to be infamous, that he wanted the fear people felt when riding to be real, and not falsely manufactured. In a rare interview that I own on cassette tape, Beringer says that his latest creation is “not supposed to be mild entertainment. I want you to fear for your life up there”.

A further legend about the ride is more metaphysical in it’s nature. Ignoring Beringer and the possibility of wilful tampering, some believe that Heaven’s Fall truly was an unlucky attraction. Again, this was most likely born from the speeches of religious preaching about the ride, but also seemed to have existed before such fanatics even knew of it’s existence.

Construction workers reported nausea, and some felt that they were being watched as they worked on building the new attraction. Furthermore, odd things were said to occur on the site, tools would disappear, and workers were plagued by hideous dreams of such a nature they dared not speak of their content. On more than one occasion, the team found bolts they had firmly fastened to have came undone during the night, and at least one worker had quit his job after seeing something he refused to tell of.

In recent years, these stories gained ground once again after scheduled work was carried out on the ride. It had been three years since the accident, and the park had decided that suitable answers would not be reached for the cause of the deaths. Therefore, the ride was set to be reopened, but further malfunctions forced it to be abandoned.

It is unknown exactly what these failures were, but it is thought that experts were left baffled after a series of technical aberrations rendered the ride unsafe to work on. When this information reached the public, earlier rumours of bizarre events led some to once more label the attraction as cursed.

I dare not comment on such beliefs myself, but I will admit as to feeling something of grotesque iniquity about the ride. It is part of what first attracted me to it; how it watches over the rest of the park, a gloomful imprint against an open sky. On many days, I have seen families approaching members of staff and asking why the ride is not open for them. Some even try to find their way to it, opening up their colourful maps and wondering why it is not signposted. Of course, should one inspect the pathways close to the ride, the original queue line is still visible, now blocked off with hedges and clumps of tall foliage. Even so, visit the park at the end of the season, when the trees and bushes have lost their leaves, and the angel sculptures of Heaven’s Fall can be seen to peer out from behind the dead branches.

In this way, Heaven’s Fall is an abnormality. World of Adventures is a family park, and the scent of candy floss fills the air as one walks along pathways of colour and music. It is home to rides both thrilling and tame, and forever attracts large crowds of people addicted to it’s pure and enjoyable atmosphere.
Heaven’s Fall is thus out of place, and it’s dark aesthetics and symbolism are a far cry from other attractions in the park. Indeed, I have wondered many times why the ride was not pulled down, for it’s existence tarnishes the blameless aura of the otherwise rainbow coloured theme park.

As I write this however, I have but yesterday gained new information about what is happening to Heaven’s Fall. It frightens me somewhat to bring it to mind, but my heart is also aflutter with sensations of the greatest curiosity. For it seems that the reason the ride was abandoned was due to excesses of legal red tape. Last winter however, the case of the accident was finally closed, and all remaining legal bureaucracy was lifted from the park and it’s infamous ride.

What this means is of the greatest importance to me. For when the park reopens in exactly two weeks from tomorrow’s date, Heaven’s Fall will be reopened with it.

It will be the first time the ride has been used since it’s opening day over six years ago. The hedges and trees will be cleared away, and the queue to that notorious ride will once again be brimming with people. What is going to happen? The park must be satisfied the ride is safe, but with something as rich in rumour and fear as that towering ride named Heaven’s Fall, it is all but impossible to be sure.

There is but one thing I know for certain about the reopening of Heaven’s Fall. I will be there, and I will arrive in such plentiful time as to make sure that I am the first in line. Therefore, when I am admitted to that monstrous attraction, I will be the first to sit in it’s seat since the time eight riders were dropped to their deaths.

It is possible, of course, that nothing will happen. The ride will work as it is supposed to, and I along with seven others will have survived that most legendary of attractions. Yet there is always a chance, no matter how small it might appear to the masses, that the stories told about the ride are true. Either way, I have to know.