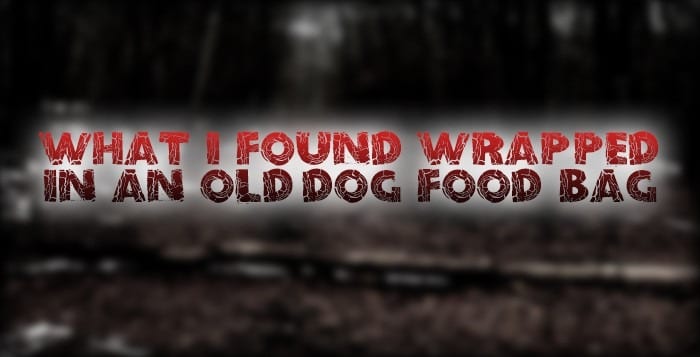 Posted at 00:00h in Deaths, Murders, and Disappearances by Creepypasta 5 Comments
Please wait...

"What I Found Wrapped in an Old Dog Food Bag"

This story came so close to being a funny, lighthearted little anecdote that I would tell in loud, exaggerated voices to my friends around our lunch table. But sadly that’s not the case.

This whole ordeal I’m about to relay to you happened about three months ago. I’m 18, in my senior year in high school and part of our graduation requirements in my school district is to do three hours minimum of community service. I had put my three hours off until the last possible second, like the lazy bastard that I am, and I had to turn in my form and the evidence of my service tomorrow or risk failing my civics assignment and being unable to graduate. So here’s what I did:

I grabbed two large, black trash bags, some gardening gloves, and my phone, and I headed off to the local trails. I thought that spending a few hours in the woods picking up beer cans and cigarette cartridges would be more than enough to satisfy my teacher.

I live in a semi-rural area and my neighborhood is surrounded entirely by woods. There are two trails that I can reach by foot, one that leads to my school, and another that leads to a large pond just off the nearby highway that takes a little while to get to. Lots of people like to go fishing and set up campfires around the water so I figured there would be the most trash there for me to pick up.

It was mid March at the time, and winter had stuck around. The snow from the recent snowstorm had just barely melted enough for me to do my work, and I hoped there would at least be a little bit of litter remaining from before the cold season. I slipped on my jacket, called my mother to tell her where I would be, should I get mauled by a bear or mountain lion, and left.
The weather was crummy to say the least. The ground was wet and muddy from the melted snow, the air was muggy but cold, and it had begun to rain. I moved as quickly as I could.

I didn’t see much trash until I made my way up to the pond, exploring fishing sites I picked up broken bottles of Jack Daniels, half empty Gatorades, sandwich bags, fishing line, and even a few shotgun shells. Making my way around the water I began to notice footprints in the mud. Some were human, some were those of a large dog. I had encountered a couple people walking their dogs down this path before, with one man in particular standing out to me. He had worn all camo and carried a rifle at his side. I had seen him a couple times and he always had his german shepard with him. He was a little bit suspicious looking, but seemed friendly enough the one time I had actually talked with him. I thought he might have been a hunter, despite it being illegal in this area of the forest. I kept thinking about this man every time I stumbled across more footprints.

I have mild anxiety, which sometimes, due to my “horror obsession” can delve into paranoia. And I was getting a bit paranoid. I recalled how a couple years ago one of my friends told me how every halloween he would have to sit out on his porch with a gun watching over his chickens, because occasionally, around that time of the year, farm animals would go missing, stolen away in the night by some unseen culprit. Lots of people thought they were being abducted and used for ritualistic sacrifice, and while I didn’t buy that story one bit, it was still fun to entertain the idea.

So there I was, walking through the woods, in the rain, completely alone. I began to pick up more and more concerning bits of trash. A broken pregnancy test, the hilt of a knife, and as I approached the public access area of the pond I watched an old rusted pickup truck speed fast down the gravel road and out onto the highway, startling me.

I had joked with my friends and siblings a couple times about how people met here to deal and purchase drugs, and pointed to the marijuana leaves and profanity carved into the wood of the bridge leading over the stream that flowed out of the dammed end of the pond. It was all a bit sketchy but I dismissed my fears and suspicions as stupid, considering how near non-existent the crime rate was in my town, and how wild my own imagination was.

After about an hour I was at the end of the trail, and by the main area of the pond where there was a sign, detailing what was and was not allowed in the area. At that point I was already a bit fed up with picking up other people’s crap, but I knew I had no where near enough. Struggling to find any I went down the one path in the woods I had yet to explore fully. It looked like it was made for trucks to drive on, it was overgrown and no one ever went walking down it, but I was desperate, and in the distance, a little ways down the trail I could see two or three bright blue and green bags slumped together in a heap. I thought having them would make my trash bag look more full for the picture evidence I was supposed to submit. So I went for it.

Approaching the trash I noticed they were dog food bags, their openings were sealed shut with those thick rubber bands you sometimes find in office supply stores, but no one ever really buys. I brushed the snow off them and tried to pick the first one up to shove it in with the rest of my trash. But it was heavy, really heavy. And then curiosity got the better of me, so I opened one of them.

The moment I removed the rubber band I knew something was wrong, really, really wrong. A smell hit me. The smell of rot. Old, dead-thing rot. It wasn’t fresh, this had been here for months, and when I fully opened the bag I couldn’t recognize what was inside. It was black, and red, and brown with decay and I could see the white of bone poking through.

They were large bones, each easily the size of my leg. They were all squished together and folded into that bag. Into all the bags. They were filled with the decaying carcasses of something. Something large.

And then I looked down at my feet. It wasn’t just what was in the bags, I was standing on top of something’s rib cage. Concealed almost entirely by snow and dirt, I had only just then noticed it.

I freaked out, ran back to the sign by the pond and crouched behind it. I pulled out my phone and dialed 911, talking through the sound of rain. I told them where I was, I told them what I found, and they said that they would send a state trooper over to investigate, and that I was to wait right there for him to arrive.

It took about 25 minutes for the man to get there and I grew more and more paranoid with every second that went by. Every sound of a car passing down the nearby roads I thought was someone out to get me. Someone who would shoot me, cut me up, stuff my body in a dog food bag and leave me to rot in the woods, under the snow. I hoped to god they were animal bones, but they seemed too thick and large to be deer in my mind, not that I knew much about deer bones.

I tried to calm myself down, told myself that I was overreacting.

So when the trooper arrived, stepped out of his vehicle and into the rain, took one look at the bones, and told me that people often came here to dump deer carcasses, I felt both relieved and extremely stupid.

I apologized, told him I was stupid and that I had overreacted.

He was a gruff man, wearing that light brown uniform and hat, he didn’t seem that tolerant of my mistake, just kinda mumbled to himself angrily the entire interaction. But he was an officer, and instinctively I guess I trusted him. I asked for a ride home, not wanting to walk the way back, but he ignored me, said nothing more, got into his banged up car, and drove away.
Tired, fed-up, and drenched in rain, I said fuck-it, figured I’d fudge my assignment and decided to just go home.

I was walking down the trail back to my house, when I got the call. I was almost out of the woods when I answered it. It was the state trooper’s office. They told me they had sent someone to the place I had described, but when he arrived, I wasn’t there, and in the place where I had described the bags as begin, there was nothing.

Who was the man I had talked with? What happened to the bones? I couldn’t make sense of it all. Surely they were just deer bones? Maybe that man noticed me there and took them away before the real state trooper could arrive, because after all, hunting was illegal in this area? The question kept buzzing and shaking around in my head, and I struggled for an answer.

I had finally been able to explain what had happened to myself in terms that I could understand and that wouldn’t cause me to panic, but that was when I saw what was in the middle of my path. I hadn’t noticed it before, but right in front of me, sitting in the dirt, was a jaw bone. A human jaw bone.

There was no denying it.

And then I ran, as fast as I could, until I arrived home, breathless and slick with mud. Not knowing what to say or do, so I did and said nothing. I hoped that if I put it in the back of my mind it would all go away.

But it didn’t, not completely, and I feel compelled to share this with you now because lately, at night, when everyone else is asleep, I can hear the faint echoes of gunfire, coming from the woods.

I’ve included some images below that I took that day, I was too shocked to take pictures of the actual bones, but I hope this is enough. There’s my 911 call history and the texts I made to friends during my breakdown at the time. 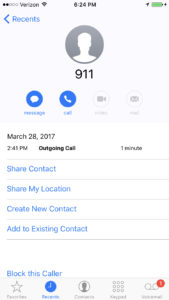 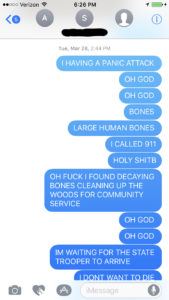 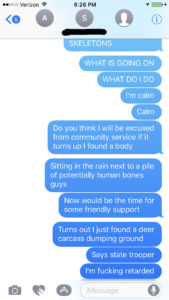 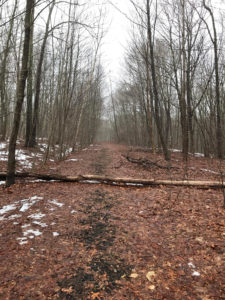