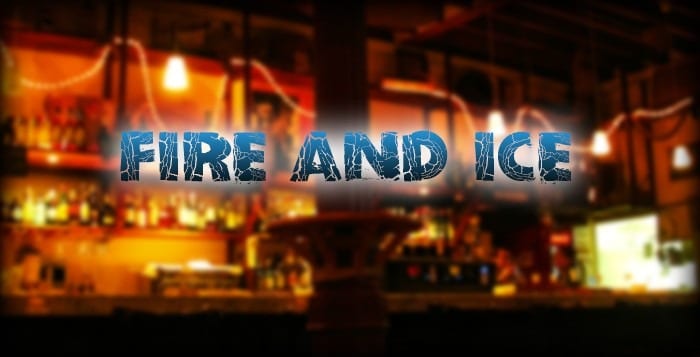 Posted at 23:41h in Strange and Unexplained by Creepypasta 6 Comments
Please wait...

It’s a simple fact of life. Fire burns everything it touches in one way or another. This particular fire was being gulped down the throat of an overweight man in his late thirties. The man chugged the liquid like it was the antidote to every ailment that could ever affect him. In one way, it was working.

He was slipping away.

The man took another sip –a much smaller one, as he looked up from the little corner he had created for himself. Way beyond a simple buzz, his hand shook as he raised his glass in the air ever so slightly, asking for another.

The bartender, a tall lanky man, poured him another against his own better judgment. The middle-aged man downed it what seemed to be seconds –asking for another as quickly as he had finished it. A wave of agitation washed over the man as the bartender shook his head.

“What the Hell man? Turnin’ down a paying customer?” slurred the man, lifting up his head high in a facade of confidence. The bartender paid him no attention –staring at the other nonexistent patrons of his bar. “Come on! I be the only one here! Tellin’ me you don’t notice me?”

The bartender sighed, reaching for the man’s empty mug to refill it. The man’s lips tilted upward at the thought of having that familiar fire run down his esophagus again. The bartender set down the now filled mug in front of the disgruntled man.

“What’s got you so down, sir?” asked the tender. Man responded with only an angry grunt and another sloppy chug.

“Sir, you’ve drank enough to create half the day’s income. Something must be bothering you,”

The man still didn’t answer but he did look up at the much taller –and much thinner man. The tender’s eyes gleamed an artificial red. ’Contacts…’ thought the man through his drunken haze. Staring up at the tender gave the man some sense of comfort. He had no clue why, but it did. He felt as though the bartender deserved to know everything. Before he even knew it himself, words that gave him away tumbled from his blubbery lips.

“My wife is such a bitch,” began the man. “Every day –every damn day, she’s sittin’ there waitin’ for me. She must be there all day just to find things to yell at me for. What a bitch… Every damn day…” he muttered, losing his battle with alcohol to speak coherently.

“Guess I just wanted some payback…” he mumbled, “Slapped the bitch so hard she spat up her nasty-ass blood… That bitch…” The bartender said nothing. His gaze lost its power and the man realized what he had told. “But I regret doing it,” added the bastard, trying to make himself out to be a better person than he was.

The bartender remained silent, his face molding into a scowl. The man knew he had messed up –he shouldn’t have said that. But, strangely, the tender didn’t look angry or confused, he just looked disappointed. The man knew if he stuck around for much longer he’d let the rest of what he did spill –and he didn’t want a prison sentence anything soon.

The man stood up shakily, about to stumble out to his car to escape the bar and its tender. Despite his best efforts to keep his already cracked composer, he fell to the floor –to disoriented to walk or even crawl in a straight line. Still remaining mute, the bartender came out from behind the bar’s counter, helping the man up by grabbing his upper arm. The man muttered an almost unbearable thanks before getting right back on his unsteady feet.

Even though the man was standing and ready to leave, the bartender didn’t release his hold.

“What the Hell, man?” half growled half laughed the man, “I told ya I didn’t mean it! What’cha gonna do? Turn me in? Ya got no proof I killed the bitch!”

The bartender remained completely silent, even his breathes inaudible. He stared at the man, not saying a word or showing a single emotion. The man was already uncomfortable, knowing exactly how much trouble what he let slip would get him in. But having those artificial red eyes staring down at him made him feel actual fear.

“Hey, man,” whimpered the male, “Let me go already.” The bartender complied, almost throwing the man by the arm. The man collected himself the best he could in his intoxicated state and turned his back to leave once more.

The man turned around to see the bartender standing at his full, towering height. “Sir, I won’t tell anyone if you’re willing to shake my hand and pay me back the next time I see you.”

This stunned the man.

He said nothing as the bar’s caretaker came towards him at an almost threatening pace. “I promise I won’t tell. I’m not looking for money, just for you to shake my hand.” The thin man stuck out his hand.

The man made no movement. He swallowed, his mind too foggy to think through what the tender was offering him. He got the gist of it, knowing that something horrible would happen if he didn’t compose himself and shake that twig of a man’s hand.

He took the man’s hand in an awkward fumble that could only be described as a handshake under its loosest meaning. The bartender smiled at the man but said nothing. The tender went behind the bar like their entire confrontation hadn’t even happened. The man, knowing it was his time to leave shambled out, getting in his car and driving away without another word.

The extra set of eyes from the alcohol made it hard to drive, but not exceedingly so.

He managed to make his way home –quite a feat. When he opened the door to his home he noticed something was off about the smell. He had left the place reeking of bleach, cleaning products, and blood. Why the Hell did it smell like his little event didn’t happen? The man walked around the house, looking for any sign of life. A quiet humming drifted from the kitchen, buzzing past the man’s ears.

His wife stood there, washing the dishes like nothing had happened.

The only person who knew –or even had a clue about what he did was that bartender. There was no possible way she could be alive. He’d beaten the bitch to death –he was positive he did.

He bolted as fast as he could back to his car. He threw open the doors and left his home faster than he had ever before. He knew where he needed to go. He had to go to that stupid bar by the stupid name of Ninth Circle to see that stupid bartender. He had to find what the actual Hell was going on. He became so focused on his task that everything else faded away from him.

Including the basic road safety laws.

The man crashed full speed into an oncoming vehicle.

“Ugh…” groaned the man, waking up. He’d never felt more clear headed or well rested in his life. He ran his fingers through his hair as he realized where he was, or rather –where he wasn’t.

This was most certainly not the realm of the living.

He was in a room made entirely of glass. With the ice beneath starting to cool the room, dropping to impossible temperatures. The man made no movements. He simply sat in the same spot where he woke, too afraid to move in any direction. It was too cold to move.

Smoke began to fill the room.

The black mist hovered at the ceiling’s level. In an instant, it began morphing and congealing to reveal a very thin, very familiar man.

It was the bartender.

“What-what the Hell am I doing here? What’s happening? How is this happening! I need answers damn it!” screeched the overweight man, smashing his fists against the bottom of the glass like a child. “What the fuck! Give me an answer!”

The bartender said nothing as he came to stand right in front of the man, leaving less than a foot between them.

“You see, sir…” smirked the tender, “You promised to pay me back on the condition that I tell no one what you did to the poor woman you call your wife.”

“And that I did,” he cut, glaring down at the man as a form of scolding. “But, you see, as a parting gift for giving me such an amazing deal I gave you back something you claim to regret losing.” The bartender smiled down a Cheshire grin. “Sadly, you don’t see pleased by my gift to you. And for that I am sorry…” The thin man bowed.

The man on the floor stayed still and silent.

“Why are you doing this?” breathed the man, beginning to understand what was happening.

“Sir, you made a contract with me. That you did,” explained the taller man. “When you shook my hand, you made a deal. I would stay silent at the price of your soul… And now that you’ve gone and gotten yourself killed… Oh, come one sir. Don’t cry now, we haven’t even started yet.”

Despite the demon’s protests, the man’s tears continued to fall.

“What you did to that woman was inexcusable. That’s why you’re down here in the Ninth Circle. Sir, I am terribly sorry for your tragic death, but I’m much less sorry to do this…”

The glass fell away.

Ice, it came at the man from all angles before he even hit the floor. It grabbed at his limbs as he thrashed them around to escape. It burrowed into his very being as it pierced his chest and invaded its cavity. The man howled in pain, his blood dripping down the pikes that pulled him into the ice sheet. That’s when he noticed it. Thousands, maybe millions of people frozen beneath the ice.

The man screamed as the ice finally swallowed him whole.

In his final feeling, he felt warm –almost searingly so. And, as a final thought, the man realized something.

Fire isn’t the only thing that burns.